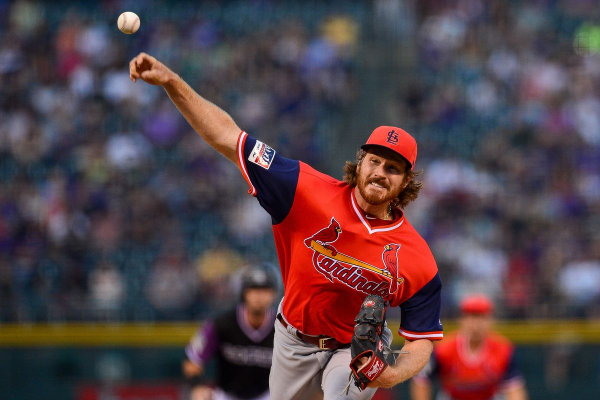 One team is trying to play for the future while the other is trying to hang on this year. The Chicago White Sox have no real intentions of competing this year. They know they are rebuilding and know their future lies a couple years down the road. The Cardinals, on the other hand, are trying desperately to cling onto a postseason chance, but many already believe their window has closed. Regardless, the two will meet on starting on Tuesday for a quick two game set when the Cardinals (46-43) travel to Guaranteed Rate Field to take on the White Sox (30-60). The Cardinals will send Miles Mikolas (9-3, 2.65 ERA) to the mound to take on Dylan Covey (3-4, 5.54 ERA). First pitch is scheduled for 8:10 pm ET.
The moneyline for Sunday’s game is set at the St. Louis Cardinals -163 and the Chicago WhiteSox +153. The over/under on runs scored is set at 9.5.

Miles Mikolas has to be one of the best stories this season. He returned from playing in Japan to sign with the Cardinals and now has been selected to be on the NL All-Star team. On the season, he is 9-3 with a 2.63 ERA, 1.03 WHIP and opponents are hitting .232 against him. In 109.1 innings, he has struck out 75, walked 17 and allowed 8 home runs. In his last start, a 8-4 win over the Arizona Diamondbacks, Mikolas picked up the win after going 6 innings, allowing 2 earned runs and striking out 3. In his last start before the Midseason Classic, Mikolas will try to end the first half on a strong note.

Offensively, the Cardinals have finally gotten a good month out of Matt Carpenter. As a possible All-Star on the fan’s Final Vote, Carpenter actually struggled to start the season off. In the last 30 days, though, he is hitting .316/.420/.705 with a 1.125 OPS. In that time he has 9 home runs, 18 runs batted in and has scored 25 runs (he leads the Cardinals in all three of those categories in that time). If the Cardinals have any chance of catching up with the Brewers and the Cubs, they are going to need him, and others, to continue to hit like that in the second half.

It will be interesting to see what the White Sox do as the trade deadline approaches. They have several players who might catch the eye of opposing teams, and with expectations low for the next couple years, they will probably try to continue to stock their farm system. Players like JoseAbreu, Asivail Garcia, Joakim Soria and James Shields, among others, might find themselves on different teams. In the meantime, though, they are on the White Sox and trying to compete on a daily basis. Of those that I just mentioned, Asivail Garcia has been playing pretty well as of late. In his last 17 games, he is hitting .333/.347/.783 with a 1.130 OPS. In that time he has 8 home runs, 2 triples, 13 runs batted in and has scored 16 runs. Numbers like that may help the White Sox move him for a decent return.

The White Sox will send out DylanCovey on Tuesday. On the season, he is 3-4 with a 5.54 ERA, 1.59 WHIP and opponents are hitting .279 against him. In 50.1 innings, he has 38 strikeouts but also has 24 walks. He has also allowed 56 hits in that time. His recent starts have even been worse than these numbers indicate. In his last 15 innings pitched (over 4 starts), he has allowed 22 earned runs, walked 13 and has allowed 21 hits.

There isn’t a whole lot to like about the Chicago White Sox right now. They have a couple young guys who might develop into good players, but most facets of the game are pretty weak right now. If it wasn’t for the Royals (25-65), the White Sox would be the laughing stock of the AL Central. Between how well Mikolas has pitched this season and how poorly Covey has pitched, I have to go with the Cardinals on this one. Take them -163.