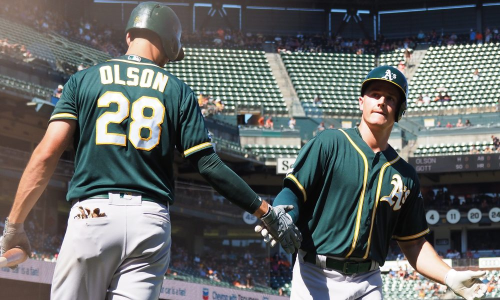 It’s amazing that the 2020 season for Major League Baseball has finally reached the playoffs, as the season was postponed just a week before it was set to start. Then haggling continued between the owners and players over a shortened 60-game season. Players were constantly checked for COVID-19; teams quarantined, games were cancelled, and then made-up with 7-inning double-header games. Finally, an expanded 16-team playoff bracket is set to begin. The White Sox finished with a 35-25 record while the A’s finished with a 36-24 record. Game 1 between the Chicago White Sox and Oakland A’s begins 9/29 at 3PM EST and the White Sox are slightly favored but that may change as the series progresses.

The White Sox lineup is going to give any pitcher a dizzying headache. Jose Abreu, 1B, has been crushing the ball this September. He’s hit 7 home runs, with 30 RBIs and he’s hitting .321. He’s a hot hitter and can slug-it for power and average. Abreu finished the season leading the team in Home Runs (19), RBIs (60), Doubles (15), and hits (76). He’s the only White Sox to play all 60 games this season. At Shortstop, Tim Anderson managed 45 Runs-scored this season (just 2 more than Abreu). Anderson is a great all-around hitter with a .322 BA and 10 HRs this season. Once he’s on-base, there plenty of hitters to drive him in. Also look for Eloy Jimenez (LF), Luis Robert (CF) and Yasmini Grandal (C) to have an impact in this series.

The Oakland A’s have an average lineup but they know how to win games. The A’s only posted a team BA of .225 throughout the season. Nevertheless, they still managed to win their division by 7 games. The A’s top HR hitter is Matt Olson who hit 14 home runs and 42 RBIs. Unfortunately, he’s only hitting .195 and has 77 strikeouts through the season. He’s most likely a pull-hitter and hasn’t adjusted to a defensive shift this season. Mark Cahna (DH) has scored a team-high 32 runs this season. Look for other A’s hitters to contribute such as Marcus Semien (SS), Matt Chapman (3B), and Robbie Grossman (LF).

The White Sox starting pitcher for Game 1 is Lucas Giolito who is 4-3 on the year with a 3.48 ERA. Much of his success came at the beginning of the season as he has struggled through the month of September. This month he’s is currently 1-1 with a 4.08 ERA in 5 starts. He’s given up 15 runs on 28.2 innings pitched. Giolito was able to strikeout 39 batters with an opponents average of .190 this month. He’s a bit of a mixed-bag but Giolito has experience and he’s one of the White Sox top pitchers. Look for Alex Colome finish the game as he is the White Sox’s primary closer. He has 12 saves with 16 strikeouts and .81 ERA for the year.

The Oakland A’s will start Jesus Luzardo against the White Sox. Luzardo is 3-2 on the year with a 4.12 ERA. He’s pitches well in an average starting rotation. For September, Luzardo has maintained his consistent stats with a 1-1 record with a 4.62 ERA in 5 games. Luzardo will need to pitch well as he doesn’t have a ton of hitting behind him. Luzardo stats seem pretty similar to Giolito. Both pitchers are going to give up hits and runs. The A’s like to use closer Liam Hendricks in save situations. He’s made 14 saves on the year and has a 1.78 ERA. Hendricks is consistent in shutting down batters and could be trouble for the White Sox hitters.

The White Sox are favored over the A’s in this game but the over/under is predicting a low-scoring game. The teams are pretty similar but the White Sox have a more complete lineup and can hit the ball better. The A’s lack big, eye-popping statistics but they manage to win games. The A’s have more playoff experience but they’ve sputtered out the past two seasons in the AL Wild Card game. The A’s may fare better playing a best-of-5 series. The White Sox haven’t made the playoffs since 2008.

Here is the Draftkings’ betting lines: