Astros A Win Away From World Series; Time To Count The Yankees Out? 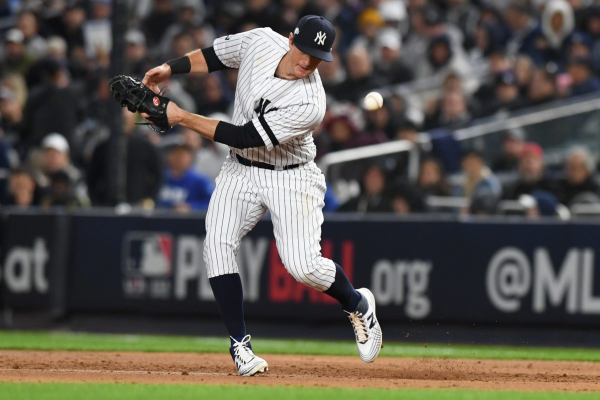 With an 8-3 victory over the New York Yankees on Thursday night, the Houston Astros took a commanding 3-1 series lead and are just a single win away from meeting the Washington Nationals in the World Series. With the Yankees playing some of their worst baseball at the worst possible moment, does New York still stand a chance?

Although the Yankees jumped out to a 1-0 lead in the first inning on Thursday, New York was eventually doomed by committing four errors and going 0-for-7 with runners in scoring position while stranding 10 runners.

For the team that led the majors in runs scored in the regular season with 943, scoring just three runs in Game 4 of the ALCS simply wasn’t good enough.

In the end, three-run home runs by George Springer and Carlos Correa were enough to push Houston to its third win of the series. Of Springer and Correa’s five total hits in the series, four have been home runs.

Now, the Yankees will need to rediscover their offensive prowess very quickly if they have any chance of coming back from this 3-1 deficit to represent the American League in the World Series.

Is A New York Comeback Possible?

October baseball is an unpredictable thing. For instance, of the eight teams still alive in the divisional round of the playoffs, the Nationals (18/1) and Cardinals (17/1) held the two worst odds. After upsetting both the Braves (9/1) and Dodgers (11/4), Washington and St. Louis played in the NLCS.

The fact that the Nationals are now in the World Series can give New York hope that no odds are insurmountable, but it will take a near-miracle for the Yankees to overcome their 3-1 deficit to the Astros now.

The biggest issue facing New York is the fact it will have to beat both Justin Verlander and Gerrit Cole just to get to a Game 7. That’s a very tall task for a New York team that’s struggling at the plate right now.

Each with at least 15 at-bats in the series, Edwin Encarnacion, Brett Gardner, Didi Gregorious, Gary Sanchez, and Gio Urshela are all batting .133 or worse in the ALCS. With six RBI, Gleyber Torres is the only Yankees hitter with more than two in the series.

That sort of production won’t be good enough to beat many playoff teams, especially not a Houston team with dominant starting pitching.
In the postseason, Verlander has a record of 1-1 with a 3.12 ERA. He’s given up three homers while striking out 20 batters in 17 1/3 innings pitched. In Game 2 against the Yankees, Verlander allowed two runs on five hits over 6 2/3 innings.

So, while Verlander doesn’t look absolutely unbeatable right now, Cole does. In Game 3 of the ALCS, Cole allowed just four hits over seven scoreless innings and looks like the best pitcher in baseball right now.

Cole, who hasn’t lost a game since May, has gone 3-0 with an ERA of 0.40 in the postseason. That’s who the Yankees will have to beat in Game 6 should they get past Verlander in Game 5.

If you focus on Game 5, the +130 Yankees will be underdogs in that single game against the -150 Astros. If New York can extend the series to a Game 6, the odds will be even more in favor of an Astros win in that contest.

With recent odds of winning the World Series as good as +153, the Yankees were staring at +513 odds with the Astros on +100 odds before Game 4. Now, facing even harsher odds, New York has only a sliver of hope of mounting a comeback.