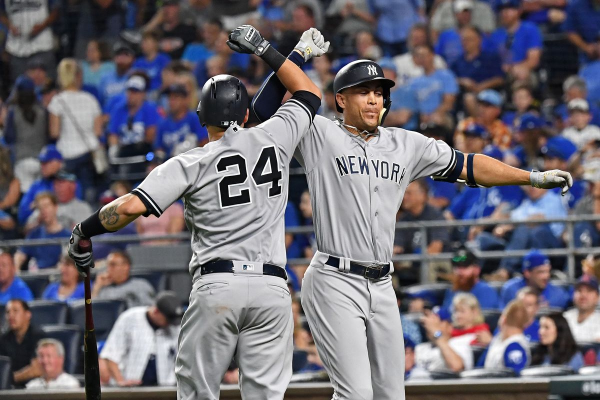 In the American League, it feels like we’ve been headed towards this collision course all year long. While the underdogs are running wild in the National League, the winner of the AL Pennant will be decided in a primetime, heavyweight fight for the ages.

When the American League Championship Series gets started Saturday night, the Yankees (103-59) and Astros (107-55) will take the field in Houston.

All season long, we’ve been anticipating this matchup while arguing whether the completeness of Houston can overcome the sheer power of New York. Well, now we get to find out in a seven-game series that will decide who goes to the World Series.

How Houston and New York Got Here

For the first time in MLB history, four 100-win teams entered the playoffs. Now just two remain, and they both reside in the American League.

The Yankees finished seven games ahead of the Tampa Bay Rays to win the AL East and earn themselves a playoff berth. As the second seed in the AL, New York faced off against the AL Central champs, Minnesota.

The Yanks made quick work of the Twins, sweeping the home run champs and outscoring them 23-7 in three games.

Houston finished the season with the best record, 107-55, and the best run differential in baseball at +185. With a 10-game gap between themselves and the Athletics, the Astros finished first in the AL West.

When the Wild Card-winning Rays came to town for an ALDS matchup, Houston struggled to show its might. After going up 2-0 in the series, Houston lost both games in Florida to tie the series. But with a 6-1 victory in the deciding Game 5, the Astros booked their place in the ALCS.

More than a contest to decide who will represent the AL in the World Series, this ALCS feels like a battle of baseball philosophies. Which is better, the best offense or the best pitching staff?

Luckily for every fan of the sport, we’re about to find out.

New York brings a daunting lineup into the ALCS. Throughout the regular season, the Yankees were the best offensive team in baseball. With 943 runs scored, New York led the majors. With 306 home runs, the Yanks trailed the Twins by only one.

Gleybor Torres led the club with 38 regular-season homers, but New York can boast seven different batters with at least 20 home runs on the season.

In essence, the Yankees bring an overwhelming lineup featuring power from the likes of Torres, DJ LeMahieu, Aaron Judge, Gary Sanchez, and more.

For the Astros, the club is led by incredible pitching at the top end, but don’t forget about the lineup. With 920 runs scored, Houston was ranked third in the majors to end the season.

Which AL Powerhouse Has The Edge?

You could write a dozen different scripts for how this series could go.

The Astros could get two dominant performances from Cole, who hasn’t lost since early May and who’s struck out at least 10 batters in 11 straight starts (first pitcher in MLB to do so), and grind out low-scoring games with Verlander and Greinke on the mound.

Or perhaps the Yankees will jump out to early leads and force the Astros to go to the bullpen before they’d like to, taking away Houston’s best weapon on the way to a World Series appearance.

While I could go on and on, let’s consult the odds instead.

When it comes to the American League champion, Houston is the most likely victor with odds of -175 in this matchup with the Yankees. New York, meanwhile, holds +150 odds of winning the pennant.

Whoever does come out on top in the AL will likely be the favorite heading into the World Series. Right now, the Astros hold the best odds to win the World Series at +125, followed by the Yankees (+310), Nationals (+470), and Cardinals (+500).