Why Maine’s Veto Override Means More Than You Realize 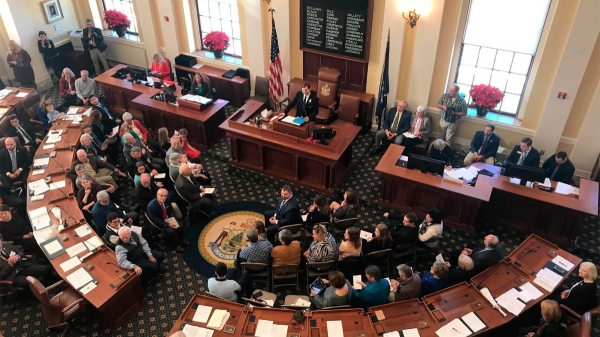 When Maine’s Senate voted to override the Governor’s veto of the sports betting bill, it became part of the industry’s history.

Sometimes, the biggest change comes in the smallest form. This can be said about many things in history, but when it comes to sports betting in the United States, it may very well be that the events that took place in Maine last week could be the tipping point for many other states that haven’t yet made up their minds about sports betting. The Maine Senate voted to override the Governor’s recent veto of the sports betting bill that had passed in June of last year, paving the way for the pastime to come to the Northeastern state.

How did we get here?

In 2019, Maine joined the frenzy of states passing sports betting bills with their vote on LD 553 all the way back in June. However, Governor Janet Mills chose not to sign the bill into law before the end of the legislative session, leaving it in limbo for the rest of the year. As per Maine’s constitution, any bill that is passed by the House and the Senate but not signed into law by the Governor carries over into the next legislative session, at which point it automatically becomes law after 10 days from the start of the session if still unsigned.

The Governor waited until the very last moment to sign the veto, and in her remarks on the decision said “Before Maine joins the frenzy of states hungry to attract this market, I believe we need to examine the issue more clearly; better understand the evolving experiences of other states, and thoughtfully determine the best approach for Maine. That approach needs to balance the desire to suppress gambling activities now being conducted illegally and the need to protect youthful gamblers and those least able to absorb losses under a closely regulated scheme.”

Another quirk in the way Maine’s government works is that the Senate can vote to override any veto by the Governor. This requires a minimum two-thirds of the senate to vote to override, so it is no slam dunk. In fact, the first attempt to override the veto fell short, with a 19-13 vote. The idea was discussed further while Senators scrambled to find more votes. Then, given some backroom angling and some fortuitous absences of a handful of Senators, the vote came in 20-10 on Feb 6th.

While Maine does not have a huge population and isn’t geographically located in a region bordering many of the larger states, this decision still sent shockwaves across the gambling industry. Many are surprised that this bill was vetoed in the first place, but the majority are shocked at the lengths the Senate went to in securing the votes for this historic override.

It is important to step back and look at this decision in its place in the sports betting landscape. First, even though Maine’s population is not huge, it is clear that this is a topic that hit home with the residents, and the Government wanted to do right by a population that was clearly in favor of allowing sports betting into the lexicon. Next, it became evident that the Government saw the potential of sports betting tax revenues as too high to pass up at this stage. With the Governor of neighboring New Hampshire touting the early success of sports betting in that state, the pressure was on for Maine to ensure its residents didn’t just drive to the border and play with any of the sites based outside the state.

Finally, the decision to override the bill is far more than a small state going to battle for some tax dollars. It means that only 20 months after the repeal of PASPA, sports betting is part of the national discussion in a positive way. After two decades of illegal offshore activity, the time has come for states to move more quickly to pass these bills, and the Maine Government saw fit to take significant action to ensure that they would not fall any further behind. This is the real victory here – even if a state doesn’t feel they have done enough research, the bottom line is that actual facts and numbers are coming from other states that show the impact legal sports betting can have on a state.

This week, the House is expected to ratify the veto override, which would then send the law on a course to regulation. Details still need to emerge with regards to the application process, and how many licenses (especially online) will be awarded. However, the major hurdle seems to have been cleared, which means that residents of Maine should soon be able to bet on their favorite teams without repercussion.