Online Sports Betting Is Likely to Debut in Michigan This Month 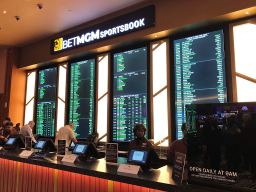 Michigan mobile sports wagering and online casino games platforms are predicted to go live in December. This is nearly a year after the state governor signed bill 4916 on December 31, 2019, turning it into law.

Almost a year now, the approved sportsbooks and online games are finally approaching their unveiling. The State Senator Majority Whip Pete Lucido told the Associated Press that the Joint Committee on Administrative Rules (JCAR) would be signing off online gambling and mobile sports gambling rules on December 1, 2020. In his statement, Lucido said that everyone wanted to see online gaming coming into effect. He added that it was long overdue as it has been done in other states stating that Michigan was losing opportunity costs.

The state of Michigan is experiencing high numbers of Covid-19 cases. The alarming data made the governor force casino operators to shut their brick and mortar gaming facilities. MGM Grand Detroit, Greektown and Motorcity had to close their doors from November 18. The governor had directed the three to remain in the dark for at least three weeks, ending on December 9, 2020.

If the three commercial casinos are allowed to conduct online gaming, it will provide the operators and the government with some revenue. When they go online, these gaming avenues will allow slot machines, poker and table games. Moving sports wagering to online will be a great move considering other states are making a lot from them.

For example, New Jersey, one of the states with legal internet gaming, has earned over $779 million from January to October. The revenue collected from online casinos is up to 103 percent as more players moved online when coronavirus shut all other brick and mortar casinos. Mobile sportsbooks have also contributed to the success of sports betting in the New Jersey gambling market. Among the $4 billion bet amount wagered this year, $3.73 billion is wagered online.

Mobile sports betting is expected to flourish in Michigan, which is why the state’s four major teams are affiliating with sportsbooks for sponsorship deals. DraftKings, for example, has partnered with NBA’s Detroit Pistons. Among the marketing pacts between the two include sports betting, fantasy sports and iGaming. MLB Detroit Tigers has joined hands with PointsBet in a contract allowing the bookie to use the Tiger’s brand in various marketing, in-stadium signage and other rights.

BetMGM is sponsoring Detroit Lions. In the contract, the bookie will use the team’s brand as it broadcast its programming. Also, the sportsbook operator will have its signage inside Ford Field. Although Michigan State is a sports-oriented state, 2020 has not been good to it. The Red Wings were the worst team in the NHL last year, the Pistons failed to get to the extended NBA playoffs, and the Lions have a losing record of 4-7. So although these teams haven’t been doing well, the introduction of online gambling could be one positive news for the Michigan residents this year.

After extending their hot and San Diego’s cold streak, the Seattle Mariners will be looking to leave Petco Park with a two-game sweep as they take on the Padres this afternoon. Yesterday, the Mariners pounded out a dozen hits and plated eight runs, and Chris Flexen pitched 6.2 shutout innings to collect his third straight END_OF_DOCUMENT_TOKEN_TO_BE_REPLACED