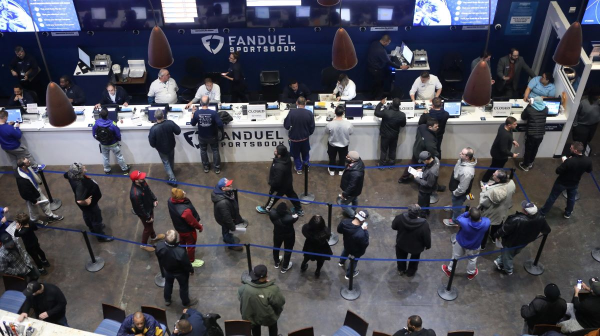 With NFL playoffs and the College Football Championship in focus, the first month of 2020 was another success for New Jersey sportsbooks.

Each month, sports betting industry insiders wait for the numbers to come out of New Jersey, and many of us are wondering when we will see a dip in those figures, assuming that after the initial excitement of legal sports betting has died down, things will settle into a more conservative approach. Well, The Department of Gaming Enforcement released the January 2020 figures this week, and it appears the slowdown will have to wait!

January’s handle for sports betting in New Jersey came in at 540 Million, which is only down 3.2 percent from the previous month. While that may sound mediocre, remember that there were only a handful of NFL and College Football games held in January, and the Super Bowl wasn’t until February and will be reflected in next month’s report. This is actually a remarkable number for the state, given the amount of games available for betting. If you compare the number to January 2019, you will find an increase of 40% in handle, which is a remarkable amount of growth considering all the main players were live by that time.

Digging a little deeper into the numbers, the majority of the handle (87%) is coming from online and mobile betting. This is not a surprise as the number has been this high for a while now. It may be interesting to see the numbers in February and how the Super Bowl, traditionally a game many people leave the house to watch, affect those numbers, but we can expect the mobile percentage to remain at least this high for the foreseeable future.

Far and away, the leaders from an operator standpoint remains Fanduel, who amassed a whopping $26.5 million in revenue for the month. Draft Kings and their partnership with Resorts (which also includes Fox Bet, the two are not separated out in the report) came in with $15.2 Million while Monmouth Park (The Score.bet, William Hill and Rush Street Interactive) chipped in with $3.7 Million.

Basketball has taken the early lead from football from a handle perspective (177 Million to 128 Million), but the hold was a little lower from that sport. Again, given the massive difference in numbers of games in basketball versus football this month, this handle number is not entirely shocking.

What may cause a stir is that in January, there was just shy of $100 Million bet on Parlays in the month. We all know that parlays are more of a casual bettors choice of bet, and the hold is going to be higher, but not even the industry experts could have predicted a 19% hold on parlays for the month. Books will be keen to push these types of bets as the year progresses.

Online Casino is affected as well

Sometimes lost in the excitement of sports betting figures is the revenue being generated by online casinos in the state. January 2020 saw revenues across the board of 53.2 Million, up a whopping 64% over this period last year. This is a sign of the times: players whoa re able to access casino games from their sports betting accounts are doing so in record numbers. Also, there have been some new games and casinos introduced into the market that are no doubt having an effect.

The year ahead looks good…but let’s be careful

Despite these positive numbers, the industry must hold its breath as football season goes away for six months (sorry, XFL) and also remember that February is a shorter month despite the leap year. Overall, this is a very good start for New Jersey, and it puts the state on pace to have another record-setting year despite neighboring states adopting sports betting legislation.