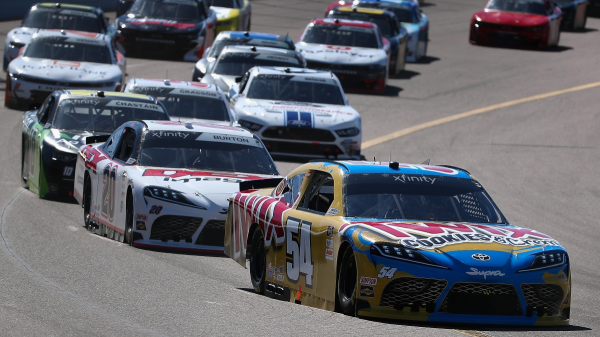 The 2020 NASCAR Xfinity 500 will be held at the Martinsville Speedway in Ridgeway, Virginia, on Sunday, November 1st.

This Sunday, which drivers go on to the finals will be decided, for the “Championship 4” in the Cup Series Playoffs. This will be the 9th race in the playoffs, the 35th in the 2020 NASCAR Cup Series, and the final race of the Round of 8.

It will be broadcasted on NBC live, and MRN and SiriusXM NASCAR will provide radio coverage. The car manufacturer with the most wins is Chevrolet, with 30 wins since the start of the NASCAR Cup Series Xfinity 500 in 1949.

Drivers have only a few days left till the showdown on Sunday at Martinsville. Due to poor weather condition, NASCAR had to run Texas’ race on Wednesday. Kyle Busch was victorious, extending his winning streak to 16 seasons with at least one win. Martin Truex Jr., Busch’s teammate, is the favorite to win this race with odds of +325 on DraftKings. He is followed by Denny Hamlin (+550), Brad Keselowski (+550), Chase Elliot (+850), Kylie Busch (+850), and Joey Logano (+850).

The race is scheduled to take place at the Martinsville Speedway by 2 PM ET on Sunday. The iconic track has been host to NASCAR races as far back as 1948, and has a lap distance of 0.52 miles and four turns banking 12 degrees.

The total miles to be covered at Sunday’s Xfinity 500 race is 263 miles, with total laps pegged at 500 laps. The first stage (stage 1) is designated by the first 130 laps, while stage 2 is pegged at the next 130 laps and the final stage by the remaining 240 laps.

The first Martinsville race in 1949 saw Red Bryon emerge as the winner. Richard Petty, Darell Waltrip, Jeff Gordon, and Jimmie Johnson all have all won this race for a record of 6 times. The defending champion of the Xfinity 500 is Martin Truex Jr.

Most Likely to Win Sunday’s Xfinity 500

The playoff standings based on driver points for drivers heading into Martinsville on Sunday has Kevin Harvick as the driver with the highest total with 4137 points, closely followed by Demmy Hamlin with 4122 points, Brad Keselowski with 4120, and Joey Logano, who already won a race in round 3, with 4094. Alex Bowman and Chase Elliot have both tallied 4095 points, Martin Truex Jr. has a total of 4084, and Kurt Busch rounds out the top 8 with 4039 points.

Drivers to bet on

The American race car driver has seven wins this season, finishing top-five in three of the last four Martinsville starts. He belongs to the Toyota Monster Energy NASCAR Cup Series Team. The No. 11 Toyota driver has garnered 44 wins, including wins in the Daytona 500 in 2016, 2019, 2020, and the Southern 500 in 2010 and 2017 in 14 full seasons. Hamlin also has 17 career NASCAR Xfinity Series wins and two career NASCAR Gander RV & Outdoors Truck Series wins.

Martin has won two straight, with six straight top 8 finishes at the Virginia paperclip, and nine top 8 finishes in his last 11 Martinsville starts. The 40 years old driver is the 2017 Monster Energy NASCAR Cup Series champion, in his second season with No. 19 Joe Gibbs Racing Toyota. Truex has 27 career wins in the series, with 13 career wins. He is also a two time champion in the Xfinity Series (2004, 2005), and has 17 victories driving for Furniture Row Racing in five years.

No one has won more races at the Martinsville Speedway than Brad. With nine races being held on this track this season, Brad has won three of them, leading for 446 of 500 laps in last year’s spring race. The No. 2 Ford Mustang driver has nine consecutive top 10 finishes at Martinsville, with eight of them being in the top 5.