College Football Kicks Off, Does the Sport Need Upsets at the Top to Spice Up… 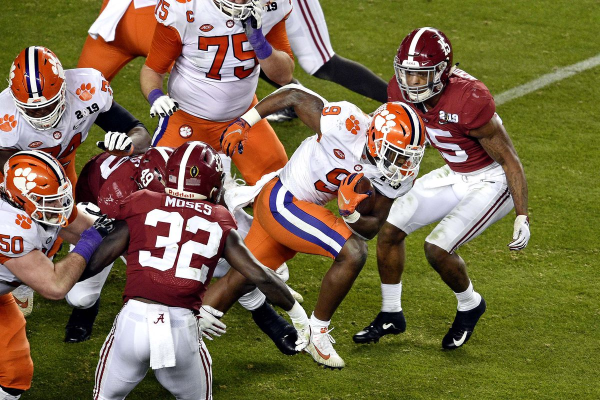 The College football season tends to be one of the most predictable leagues surrounding the sports world. Typically, when the season starts, the teams that are ranked at the top usually end up playing in the championship.

Let’s be real; everyone loves to see upsets. It changes the season up and gives other colleges an opportunity to shine. The only people who want to see Clemson in the championship game again are fans of the team.

Everyone would love to see different teams represent their school in the title game. Last year was a very predictable season as Clemson and Alabama faced off in the final game of the season.

When looking back at the past four seasons in NCAA football, it has gone back and forth between Alabama and Clemson. Clemson took home the title in 18’ and 19’, while Alabama won in 17’ and 15’.

Alabama has won the championship 5 times in the past 10 seasons. While some may be passionate about college football and don’t see a problem with this, other fans have definitely grown sick of seeing the same teams.

The current season which just started last weekend will likely be more of the same. You have Clemson ranked number one, and Alabama ranked number two. Clemson already got off to a hot start in their first game against Georgia tech.

The top-ranked Tigers demolished the unranked Yellow Jackets 52-14. The chances of Clemson losing to an unranked team this season are very little to none. The same is to be said about many high ranked teams; upsets are few and far between.

As a fan of the game, you hope to see a number of upsets this season. Even though they don’t happen often, they’re always very unexpected.

Will Any Changes Be Made in the Future?

The biggest problem with college football is the matchups. More weeks than not a ranked team will be playing an unranked team that has no chance. It would be great if the NCAA could create a more competitive schedule to prevent this, but it’s easier said than done.

You can only play so many teams in a season, and regardless of rankings, there are rivalries that must be played to keep tradition alive in the sport. Hopefully in the future we will see a league-wide increase in talent to keep the games more competitive.

The fact that many of these juggernaut teams finish the year with one or two losses makes for a very dull progression of the season. This is why upsets increase the entertainment value a great amount.

When a top tier team is handed a loss, it usually will drop their ranking more than just a couple spots. This opens up the standings and allows the following games to have a lot more meaning.

Upsets are great in all sports, but especially in college football. When a top-ranked team loses to an unranked small school, it blows up the entire league. Unpredictability is one of the greatest factors for fans of the game, and we hope to see more of it during the 2019 season.