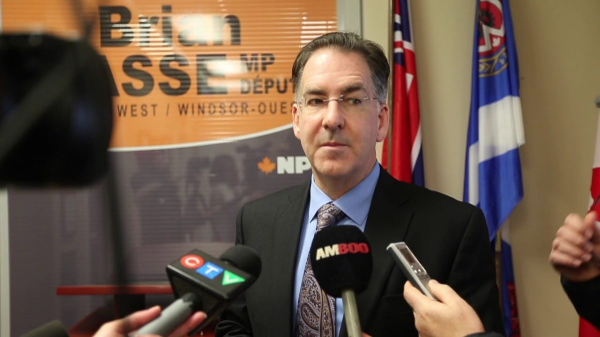 With all the talk around the repeal of PASPA and the legalization of sports betting in the United States, the neighbor to the north has now started to make some news of their own regarding the gambling landscape. This past week in the Canadian Parliament, Member Brian Masse of the New Democrat Party announced that he would be introducing a measure to repeal the law banning single-game sports betting in the country and allowing for regulated betting across all of Canada.

“Currently in Canada about $10 billion goes to organized crime or offshore betting,” Masse told the members of Parliament in his address. “That money could be redirected to priorities, and accountable sports betting could take place. The United States is actually moving toward this.”

Betting is big business in Canada

With a population roughly the size of California, Canada may not register as a large gambling market to those living in the United States. However, the country has a real love for betting across all forms of gambling and has mirrored the U.S. in its desire to bet on sports.

With a more relaxed view on prosecuting offshore sportsbooks and casinos (they are not legal in Canada either), the airwaves are littered with ads for some of the largest companies in the marketplace. Also, some of the biggest brands were either conceived by Canadians (Bodog/Bovada and Poker Stars, to name a couple), and many online gambling companies have their operations in the country.

Masse has tried before

This announcement from MP Masse is not a surprise for many who follow the industry. He has introduced this type of legislation several times in the past, most recently in 2016. Each time, the Canadian Parliament has voted to shoot it down. However, there are some more factors at play this time that could possibly swing the vote in his direction.

First, with the repeal of PASPA in May 2018, the doors have opened to U.S. states to regulate on an individual basis. While 2018 brought many states into the world of regulated betting, it wasn’t until 2019 that many of the states that border Canada passed legislation. With Illinois, Ohio and Michigan all poised to go live in 2020, and tribal casinos in Western New York taking their first wagers this month, the pressure is on the Canadian government to do something to make it less compelling for Canadians to slip across the border and place their bets.

Second, the Premier of Ontario (Canada’s largest province), Doug Ford, announced in April his intention to open up his province to competitive online gambling licensing. With a regulated playing field, the province could reap the tax revenues from the billions of dollars being spent online. Since the announcement in April, the Ontario Government has had several closed-door sessions with online operators and experts to talk through how best to regulate the industry. No timeline has been announced for introducing regulations, but it is safe to say that it is coming sooner than later.

Canadians can bet on sports, sort of…

Through all of this, Canadians have been able to bet on sports for many years – just without single-game access. Most of the provincial lotteries have offered a parlay-style betting game (Pro-Line), which has proven to be wildly successful in spite of itself. These games, which are classified as lottery games as skill is stripped from them, actually offer worse parlay odds than just heading to an offshore sportsbook to make those wagers. Regardless, the success of these games with the general public has fueled the desire to legalize sports betting across the country.

As with the previous efforts by MP Masse, this new bill will be introduced and debated before heading for a vote. While there are no indications that the bill will be passed this time around, there is a larger groundswell of interest in a regulated sports betting market than ever before. Given the holidays are only a few days away, it is unlikely that anything will happen with this new legislation in 2019.

Why is this important for operators south of the border? The longer this bill goes unvoted, and therefore not passed, the more time operators on the border have to get their operations up and running and starting to attract players from Canada. It may only be for a short period that these operators can count on revenues from the Great White North, but even in that window, they could gain some loyal customers who could remain loyal even in the face of legal betting in Canada.

Regardless of what takes place with legalizing sports betting in Canada, one thing is for sure: the country is sports-mad. With the success of the Toronto Raptors in the NBA this year, there are more eyeballs of casual fans on the sports networks broadcast both from Canada and the United States. With all the talk about sports betting on these channels, more Canadians will be looking for a place to bet, and if they live near the U.S. border, then they may just find themselves pulling out their passports so they can pull out their wallets.

Sports betting in Canada seems like an inevitability at this point, especially considering what has taken place in the U.S. over the last 18 months. Betting News will keep an eye on the situation and will update our readers as soon as there is any movement one way or another.