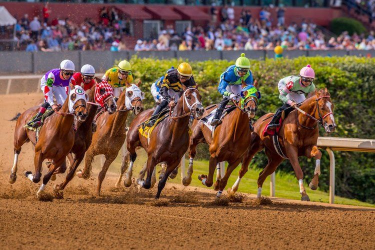 We are seeing double today, without even a drink.

For the first time ever, the Rebel Stakes at Oaklawn Park has been split in two separate races due to the number of entrants.

It would be great news to see so many quality horses gathered together in Arkansas if it was a sign of revival of the horse racing industry, but it is unfortunately for sadder reasons.

A series of unexplained horses’ fatalities has led to a thorough examination of the track quality at Santa Anita. Therefore, the planned Kentucky Derby preparation race over there has been cancelled. Owners and trainers have had to scramble to find a venue for their horses to run and many have chosen the Rebel Stakes at Oaklawn Park.

Without further ado, let’s see how the races line up and which horses deserve to be backed with some bets.

Analysis and picks for the 8th race at Oaklawn Park on March 16 2019, first leg of the split Rebel Stakes:

Oaklawn Park tends to be very early speed favoring, meaning that fast closing horse have a hard time bridging the gap in the stretch. The heavy favorite in this leg is IMPROBABLE who is more like a closer type so that’s not necessarily good news for him. IMPROBABLE is a dominating presence on paper however, with Beyer Speed Figures which dwarf the competition… The long pause of 3 months would be a concern with any other trainer, but Bob Baffert is known for his success when resting his horses in preparation of a big race. He for instance did the same for the 2015 Rebel Stakes with the Triple Crown Winner American Pharaoh… IMPROBABLE is very hard to dismiss here and should be on your Exactas.

Just inside him, GALILEAN is likely to try for the lead and get it. On paper there is no really powerful pace opposition so GALILEAN might be able to get to the lead on the first turn and try to hang on for as long as possible. If the pace is indeed easy, maybe he can ride the track bias to victory, but I would not bet a lot on it considering the quality of IMPROBABLE.

IMPROBABLE needs to be near the top of the picks, because of the trainer patterns and of course his past performances. There is no point in betting him for the win as an odds-on favorite I believe but he must be in the exotic bets.

With him on the Exacta and trifecta, our picks are GALILEAN and EXTRA HOPE. In all likelihood, these are the horses that could give IMPROBABLE a hard time in this first leg of the Rebel Stakes.

Analysis and picks for the 10th race at Oaklawn Park on March 16 2019, second leg of the split Rebel Stakes:

The second leg is also kind of a one-sided affair with GAME WINNER, another Bob Baffert horse, looming large on this field.

Just like his stable mate in the other Rebel Stakes race, GAME WINNER is likely to sit off the pace and try to pounce in the stretch, which is not necessarily easy at Oaklawn Park. He has more serious competition on the speed figures front however, especially from OUR BRAINTRUST who will try to rebound from a tough loss last month. It was quite a good race and he has a chance at a podium today at decent odds.

OMAHA BEACH is well regarded by the track handicapper, but I am turned off by the fact that it took him five tries to brake his maiden. The speed figures were not bad but if you can’t beat the Maiden class, it is not looking good in a competitive Grade 2…

The interesting, but risky, bet in this race is JERSEY AGENDA. He faced a tough trip last out, but he has run quite well here at Oaklawn Park and has enough early speed to try to ride the track bias. I believe that JERSEY AGENDA has what it takes to claim a spot on the podium.

GAME WINNER comes in rested under the winning stewardship of Bob Baffert so he certainly can’t be ignored. You must include him in the exotic bets but I don’t think that a straight win bet is a good idea at these odds. To accompany him on the podium, I like OUR BRAINTRUST. On the speed figure front, he is right up there with GAME WINNER and with more racing luck he could have won his last race too. I think that the odds will be slightly inflated and that OUR BRAINTRUST will offer great value here.

Also likely to go out at a good price, and able to surprise, is JERSEY AGENDA. He can rebound from a severe loss last out where he got impeded in the first turn and that might have been a turn off for the horse. With a cleaner trip, JERSEY AGENDA can stay in front throughout and who knows, maybe hang on for the surprise victory.