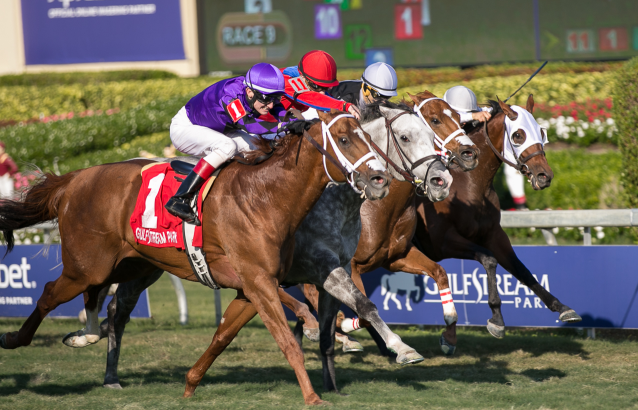 This middle distance turf race at Gulfstream park starts very close to the first turn and therefore horses starting on the inside will probably have an easier trip.

The corollary is that the outside gates will have a harder time and this is especially true for those with a bit of early speed. Interestingly, the favorite is likely going to be parked outside for the whole race, which should hurt her chances and therefore betting against her has a lot of value.

With a favorite at risk, uncertainty abounds but another strong contender should manage a good trip and be able to strike in the stretch.

Analysis and picks for the 11th race at Gulfstream Park on September 15 2018:

Number 1, FLORIDA FUEGO moves to the turf for the first time after a pretty good career on the Florida dirt circuit. Her come from behind style is probably better for the grass so that might be a good plan and her trainer probably knows what he is doing. The pedigree of FLORIDA FUEGO is not bad for the turf, but one could have preferred that she trained a bit on the surface before making a start on it… The poor jockey on board is not necessarily a great sign either and recent workouts are really not great. It all looks a bit risky but FLORIDA FUEGO should be in a prime striking position in the stretch, so she could maybe surprise at high odds…

Number 3, DAHLONEGA goes way up in class and also extends the racing distance a lot. We can bet that she will go for the lead and might get it, being on the inside of the track too. There is some competition for the early lead so DAHLONEGA is likely to make life difficult for other early speed horses, but it seems unlikely that she could go all the way today.

Number 4, MIDNIGHT SOIREE likes to run fresh and therefore the pause since the last race is probably a good thing. The workouts since are very encouraging and so are the results of her trainer this year. MIDNIGHT SOIREE has won her last race in the stretch, despite the slow pace and did that at this same class level. She has beat some of today’s opposition a couple of times and did so last out despite a relatively bad trip. Today, she should be able to settle on the inside and conserve energy to strike in the stretch and therefore has a very good chance.

Number 5 SHANGAI STARLET made her debut on the turf at the start of this year and did terribly. She was moved to the dirt and did better, winning three races, including her last one, a stakes race which was moved to dirt from the planned turf. Today, all indicates that the turf race will take place, so we need to look at SHANGAI STARLET based on the return to turf. On the plus side, SHANGAI STARLET works for a hot barn so it might have brushed on her. Also positive, the recent race indicates that SHANGAI STARLET is pretty fit. Now, it is concerning that the wins on dirt were done in pretty poor times and the only turf start was her worst. SHANGAI STARLET will probably go out at relatively low odds, especially considering her star trainer, and I don’t think she is a good bet today.

Number 6, LISA LIMON has been scratched

Number 7, WHITHEELGIRL has not had a very successful career so far despite competing in easier class categories. Her last win came about 6 months ago but she had her best lifetime race on this Gulfstream Park track in July. Before that performance, she had been rested a bit longer than usual and it paid off so maybe the two months vacation leading to this race is a positive. Still, WHITEHEELGIRL has not done much in her career and she would need to improve a lot to have a chance today.

Number 8, CRY UNCLE is likely going to go head to head early with Dahnolega and will therefore be parked outside for the first turn or exerting herself too much to clear the lead. Her only turf start was not too bad, and she has trained well for this one. Still, CRY UNCLE is most likely going to have a poor trip and faces a hard pace challenge, so I believe that she will fade in the stretch or before.

Number 9, YOUVEGOTTOPAYTOPLA has been scratched

Number 11, WEEKEND MISCHIEF comes back to turf despite a more successful dirt career so far. WEEKEND MISCHIEF tried the grass five times and failed every time, so I am not sure why the trainer is bringing her back to the surface today. If she gets lucky, today would also be her first win at the stakes level so it all sounds pretty far-fetched. You can add to these drawbacks the terrible starting gate and I think that WEEKEND MISCHIEF should not be much of a factor in this race.

The second morning line odds favorite, MIDNIGHT SOIREE, is a great bet based on the likely bad trip that the favorite will experience. There should be enough early pace for MIDNIGHT SOIREE to be able to capitalize and she will be in a great position to do so, starting on the inside.

Behind her, I think we could see a couple of longer odds horses, especially FLORIDA FUEGO. She has proved that she has some class and the first start on the turf makes sense based on her pedigree.

AMERICAN FROLIC did not show much in two starts at the stakes level but she ran pretty well in the last race so maybe she is progressing and can grab a podium at interesting odds today.