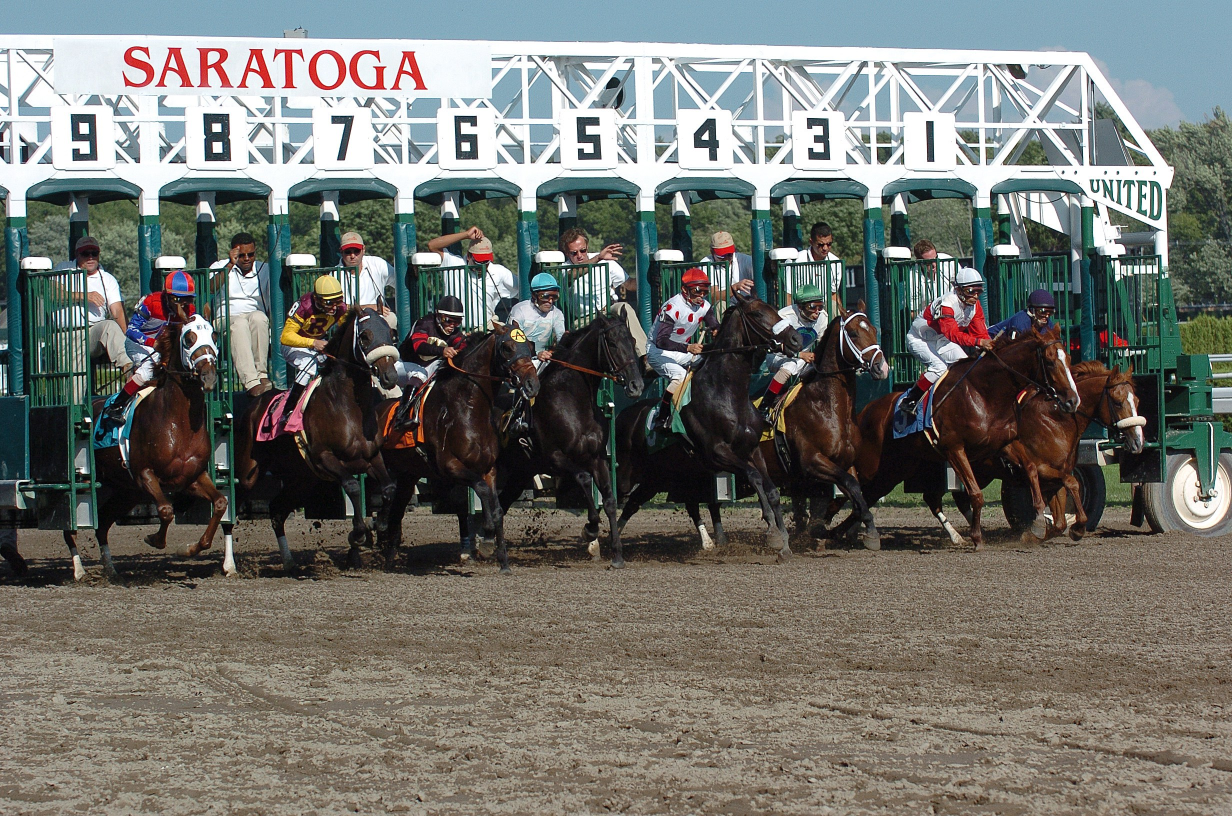 The featured race at the Saratoga today is a state-bred stake, meaning a lesser class race compared to the usual graded stakes of the Saratoga racetrack meet.

Still, a few quality horses will be battling it out today and the race is pretty open…

There is a chance that the grounds still be heavy from the recent rain so horses on the outside will be favored as there might be some track bias today again.

But it is hard to find a clear cut choice here and it might be a good day to bet Exotic bets more.

Analysis and picks for the 9th race at the Saratoga Race Track on July 26 2018:

Number 1, MIGHTY ZEALOUS has placed in a state bred stake last month but otherwise he has been racing in optional claiming races. At 7 years old, it is a bit late to still be in that class but obviously MIGHTY ZEALOUS is a good working man who keeps toiling and paying the bills for its owners. I don’t think that he has what it takes to win this one here though. The speed figures are too weak as well so fighting for the win seems to be a stretch Maybe he can surprise for a place with his late running style but that’s a stretch too I think.

Number 2 T LOVES A FIGHT has not run much in the last year and when he did it was not particularly impressive. Maybe there is some physical ailment bothering him. T LOVES A FIGHT can maybe claim a win on his best days, but it is very much in doubt that today is the day. The workouts are sharper than usual, and he comes back to a more familiar distance. He has done well on wet surfaces before too so that’s a plus in this bad Saratoga weather. T LOVES A FIGHT has a come from behind style, so he would probably like a hot pace and it is not sure he will get it today. Better to watch him race than bet I think.

Number 3, LONG HAUL BAY has two recent hot speed figures and some hot workouts, so he looks pretty sharp coming into that race. The last race was a Grade 3 stakes so quite higher class and he did not do too bad in it… LONG HAUL BAY likes his rest so the two-month gap between races is not too concerning, especially because of the good workouts. The jockey knows how to navigate the Saratoga racetrack, but he will need some pace in front to really get a shot. I think that LONG HAUL BAY will be part of the mix for the places and maybe win but the pace needs to be somewhat favorable

Number 4, CELTIC CHAOS won that very race last year but since then, he did not do so well even when trying a lesser class level. On that day he was coming off two other strong performances, so the question is whether CELTIC CHAOS is back in form. There is one good workout, but it is not so impressive on that front. His trainer is doing very well lately so maybe that transpires into CELTIC CHAOS preparedness as this is the first race working together. Still, CELTIC CHAOS has a long way back to travel to have the ability to win today and he also needs a hotter pace than he is likely to get. I think that it is not worth betting on a miracle by his new trainer today.

Number 5 EYE LUV LULU has been doing well lately and so has his trainer. He comes in today with a decent third place in a much higher class Grade 2 and before that did well at the ungraded stakes level. EYE LUV LULU has early speed and does not have a ton of competition in this race for the lead so maybe he will be able to set easy fractions. For some reason, he failed multiple times at Saratoga so I hope he is not allergic to upstate New York. Some of the best races came on the wet so a rainy day would be a plus. The odds will probably be short but EYE LUV LULU certainly has a great shot today.

Number 6, RUNAWAY LUTE come up in class after a very good win in good time earlier this month. He has been pretty inconsistent in his career so far though, so repeating the career best today is maybe unlikely. RUNAWAY LUTE does not have the most successful trainer either so I am not sure I like the chances based on the climb in class of a career best speed figure. I expect that he will not run as well today and it is better to pass.

Number 7, GOLD FOR THE KING is also coming back up a class notch but he had some success at the level last year. He also comes in with a field best speed figure last out. In the last race at Belmont Park, GOLD FOR THE KING destroyed the field going wire to wire and generally in his career he has had the more success when unopposed. Last year he did win coming from behind though and today’s jockey has brought him to the winner circle a few times. GOLD FOR THE KING works for an in form trainer so that’s an other plus in his column. Good results at Saratoga and not bad in the rain. GOLD FOR THE KING has a prime chance but the hot speed figure will probably get all of the betting public money…

The morning line odds favorites have pretty good profiles and I like their chances but I am not sure I like the odds though.

I expect that GOLD FOR THE KING will go out at tiny odds due to the impressive speed figures. He has a versatile profile so should be in play for the win or place but on straight win bets I don’t think the value will be there. He should be part of the Exotic bets though.

LONG HAUL BAY is another one who I like on the exotic bets but unless the odds go way up I would not take a chance on him for the win. The pace scenario is not likely to benefit him immensely and he might have to fight the Saratoga track bias.

EYE LUV LULU is my favorite today and I hope that the odds will go up a bit because but based on the record and trainer form, he looks good on paper.

I think that these three will be part of the mix in the end but we need to wait and see if the odds go up on any one.

A bet at 4-1 or more on any of these is a great bet but I doubt we will see that so I will probably concentrate on the exotic bets.