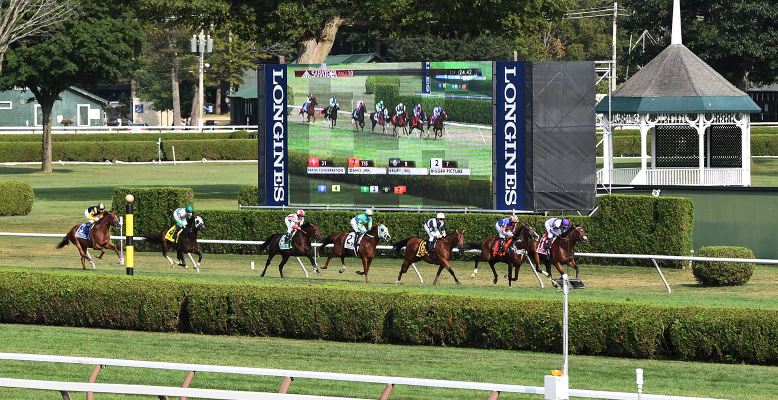 The Troy Handicap is given Grade 3 status this year and there is a mixed bag of talent attempting to win it today.

Multiple horses make class moves and there is no clear leader in term of class ability. Distance and surface is perfect for nearly all horses and we have many horses with proven success at Saratoga Springs.

The morning line odds favorite is coming off a pretty disappointing race so he will need a rebound to do well today.

The pace scenario is relatively clear, with only a couple of horses having a propensity to go to the lead. But with class in question for the likely early fractions leader, the race is pretty open…

Analysis and picks for the 5th race at Saratoga on August 5 2018:

Number 1, SQUARE SHOOTER will make a first attempt at the Graded stakes class level after starting the year racing in a claimer. Since that race, he was moved to the turf sprint and appears to be blossoming. Still, making the jump from optional claiming to Graded stakes is big and the trainer does not seem to judge his horses’ ability perfectly when it comes to big races. SQUARE SHOOTER was given two months break for this race, but he has never raced well after a layoff. This time the workouts are not bad however. With the class jump and the layoff, I don’t really like SQUARE SHOOTER chances today.

Number 2 HOLDING GOLD recently tried his luck in two higher class races and did not embarrass himself. HOLDING GOLD even won a Grade 2 race last year so in terms of class, it should be no problem for him today. He has done well on this distance before and at Saratoga as well, finishing second in this very race last year. HOLDING GOLD tends to start slow and that’s a problem at this distance. Moreover, with the inside post position, he will not necessarily have the easiest trip. HOLDING GOLD has a chance for sure, but it might be hard to grab more than a place.

Number 3, DISCO PARTNER won a Grade 2 race two months ago where he also beat today’s opponents, Holding Gold and Blind Ambition. DISCO PARTNER had a pretty good trip in it, albeit parked two wide all the way. Following that win, the trainer entered DISCO PARTNER in a ungraded stakes route to repeat the win but he was not much of a factor and that was a disappointing race. On paper, DISCO PARTNER definitely has the class and he won both at the distance and at Saratoga. The last race was not too encouraging though and as a short-priced favorite, I think that DISCO PARTNER is a bet against today.

Number 4, READY FOR RYE has many attempts at the stakes class level and they all ended up as losses. In a Grade 3 last month, he was just no factor. READY FOR RYE is a killer on the wet surfaces though, so should it get to be a deep turf track, his chances will improve dramatically. But there is no rain in the forecast at Saratoga so one can just assume that READY FOR RYE will not be doing much today.

Number 5 TOMBELAINE is another one who will make an attempt at going up in class but it looks like a tall order for him too. All the stake attempts in the last two years have been failures. TOMBELAINE has won his last race but that was almost two months ago and since then the workouts have been quite bad… A positive element is that TOMBELAINE has some early speed and should be forwardly placed, a plus at the Saratoga Turf sprint course. But based on class and recent workouts, I think that TOMBELAINE is not at the right place today.

Number 6, BLIND AMBITION has finished behind some of today’s opponents in his last two races but makes a big change today by taking the blinkers off. Considering that there is little speed in the race, that’s a strange decision as BLIND AMBITION best chance is probably to try to go wire to wire which he has pulled off in the past and blinkers tend to help focus the horse and just do his job in the front. It is a bit strange to try that trick for the first time with that horse, so late in his career but the trainer being a world-class one, maybe he knows what he is doing. Other positive element is the fact that BLIND AMBITION has won on the distance at Saratoga and the class level is probably OK.  It is a gamble but with little early speed in this race, a good post position and this equipment change, maybe there is something here with BLIND AMBITION.

Number 7, SANDY’Z SLEW is probably going to try to take them all the way like he managed to do in his last two races. The races were at an easier class level but with little opposition in the first few furlongs, SANDY’Z SLEW has a good pace scenario in front of him. The outside post position also tends to help on the Saratoga racetrack. The class is very much in question but SANDY’Z SLEW has a favorable pace scenario brewing and can be on the podium.

Number 8, EASTWOOD will make a first try on the turf at 8 years of age and it will be his first race in over a year. The workouts are pretty impressive but apparently were all on dirt and I would prefer to see some turf exercise before a turf try… A win or even a place today would be quite a surprise…

There is no clear dominance in this race and the morning line odds favorite comes off a poor race in which I see no excuse.

Multiple horses in the race seem to be overmatched so I think that we can expect a podium made out of horses running close to the lead or near it.

The world-class trainer of BLIND AMBITION is making a big change of equipment by taking the blinkers off. At this age, it is a mystery why, so bettors will be gambling on the undeniable talent of the trainer… On paper the class fits so if the trainer’s genius is working with the equipment change, BLIND AMBITION will be a major threat.

HOLDING GOLD is coming down in class and will need to battle a pretty bad post position and a probable slow pace but he is on paper able to win this one or at least place.

SANDY’Z SLEW is likely to grab the lead and can go all the way but there is a question mark on the class level. Still, pace handicapping tenets say that he has a good chance today.

After the Novak (or Novax?) Djokovic visa saga dominated pre-tournament headlines, we can finally look forward to some on-court headlines as the Australian Open gets underway. Djokovic news has taken the focus off of the tournament, which is certainly understandable. After all, the fate of the world number one and top seed would significantly impact END_OF_DOCUMENT_TOKEN_TO_BE_REPLACED