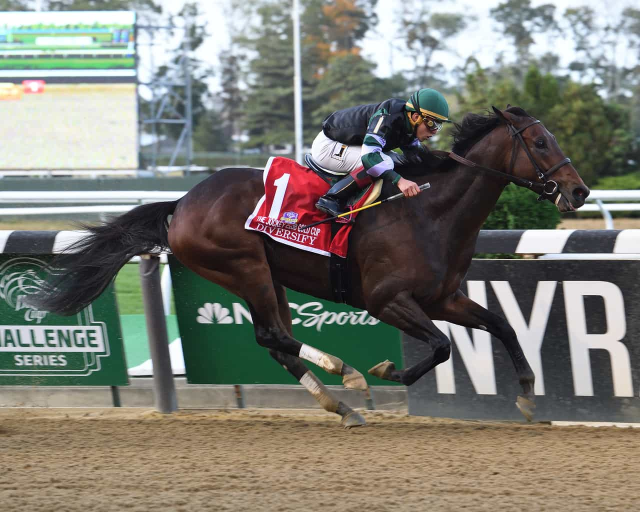 The Grade 1 Whitney is one of the highlights of the Saratoga racing season and the top older horses flock to fight for a 1.2 millions purse.

The weather in Saratoga looks to be rainy again so I expect a humid track. If so, we might see another case of the Saratoga track bias for speed horses on the outside.

There is not a lot of early speed in the race so it looks possible for the favorite to go all the way but there will be many high-class horses waiting to pounce on him.

Analysis and picks for the 9th race at Saratoga on August 4 2018:

Number 1, TAPWRIT has not won a race in 13 months, since his win in the 2017 Belmont Stakes. Granted, he did not race a lot, but one would have expected more from this horse in his two 2018 starts… The speed figures were not very impressive in these losses, and he does not show terrific workouts since. It looks difficult today for TAPWRIT with little positive signs,

Number 2 BACKYARD HEAVEN had no excuse for his loss last out, having a perfect trip behind a hot pace. Maybe the distance was a bit too long but if so, bad news, the distance is the same today… The workouts since that race are not bad and his trainer is having a great Saratoga racing season so far. Still, at a relatively short starting price expected and no excuse in the last race, I don’t think it is wise to bet on BACKYARD HEAVEN to rebound today.

Number 3, DALMORE has early speed and we can expect that he will be a factor early in the race. He is making a big class step up though and his results or speed figures so far in 2018 are not very impressive. DALMORE has not been able to win much in lower class categories and today he is facing some tough opposition. He is unlikely to be much of a factor late today.

Number 4, MIND YOUR BISCUITS has made a lot of money finishing races on the podium but also has a few high class wins, mostly in Dubai. Dubai races are not easy by any means, but Saratoga is a long way from it, settings-wise. MIND YOUR BUISCUITS has taken to racing every two months since he became a bit older, so the gap is perfect here. He nearly won a Grade 1 last out after a relatively comfortable trip though he had to swing wide on the far turn. Maybe with a better trip he would have won it? Regardless, today, MIND YOUR BISCUITS is stretching in distance and that might be a problem as his best races have been sprints. He has good success on wet tracks but again, maybe in a route he can tire. I think there is a good chance he gets on the podium but at very short odds I will not be betting on him.

Number 5 DISCREET LOVER had a pretty easy trip in his last race and yet only managed to finish third. It was not too surprising however considering that DISCREET LOVER has been struggling to win above the ungraded stakes level. That race was a Grade 2 and today is a top Grade 1, so the task is not going to get easier… DISCREET LOVER always shows superb workouts, so I don’t think that it is much of a sign and I doubt he can play a part on the podium today.

Number 6, DIVERSIFY destroyed the field last out, going wire to wire in fast fractions and apparently is still running hot if you trust his good workout last week. Today, DIVERSIFY might be in luck as he could be riding alone in the front, in relatively easy fraction, with the help of a Saratoga track bias which favors horses on the outside. DIVERSIFY has not run a lot in the rain but a second place shows that he does not completely hate it. The trainer generally knows what he is doing but he has not been so successful at Saratoga so far…Still, I expect DIVERSIFY to go all the way today.

Number 7, GOOD SAMARITAN started his 2018 campaign with a win but since then lost two lesser graded stakes against two of today’s opponents. He was given a two months break but shows pretty poor workouts and he has historically shown more in the morning before good performances. GOOD SAMARITAN might not be a good match in terms of class and the workouts say that he is not ready, so it is a pass for me.

Number 8, MCCRAKEN has not shown a lot recently in terms of speed figures or winning record. In his last two attempts he finished behind some of today’s opponents in lesser class races. The workouts are not showing a lot and he would need a ton of progress to be in the mix for the win today. If he can go back to his glory days, he has a chance at a podium but that seems a bit far-fetched.

Only a couple of horses are known for their early speed and one of them is likely to falter pretty early. Moreover, there is probably going to be a track bias that can help the other speed horses.

That horse also happens to have posted a solid win in fast fraction and great speed figure last out and has a winning record in Graded Stakes company.

There seems to be little in the way of DIVERSIFY today. I expect him to win it and I think that he is a great bet at almost any odds.

There will be some danger coming from MIND YOUR BISCUITS but given the pace scenario and the distance factor, I think he will fall short for the win.