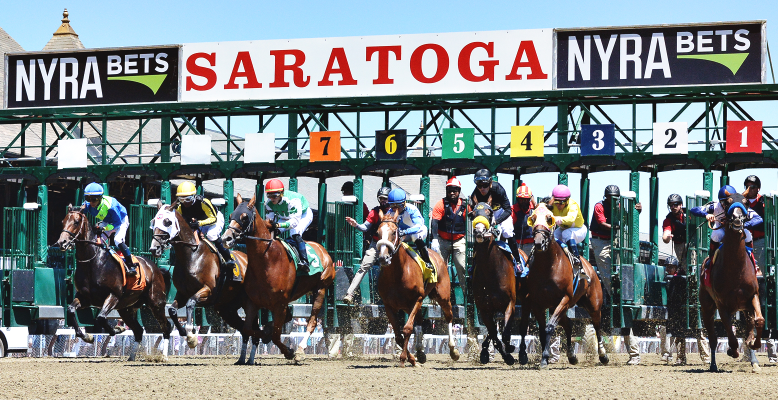 The second leg of the Saratoga Pick 6 today is a Grade 1 route race for the girls.

Two dominating forces will go at it and given their different running styles, it should be an exciting race up until the end.

It is very hard to separate the two favorites on paper and at least one other horse could spoil the party.

Number 1, ABEL TASMAN is one of the two favorites in this race and with pretty good reasons. For one, ABEL TASMAN just made a mockery of her opposition in her last race, a Grade 1 at Belmont Park. For second, ABEL TASMAN has won on this track and distance and almost won a Breeder’s Cup race on the same distance last year. There is no doubt that she has class and stamina to manage the distance. Also working for her: her versatility. In the last race ABEL TASMAN basically went all the way in front and never stopped but before that, she managed to also score coming from behind. Add to that the good workouts, and the fact that her trainer has won half of his races this week and you have yourself an impressive beast. Now, there is the question of the layoff… ABEL TASMAN last raced at the beginning of June and it seems that she is always a bit rusty coming off the bench. She also faces some serious opposition today… It would seem crazy to pass on her, based on her resume, but outside of the Pick 6 and exotic bets, I think that there is value in betting against her, just because of the price factor.

Number 2 SHE TAKES HEART is not likely to impress much today and one can see her as a seat filler. Just by running her today, the connections make a guaranteed $5000 profit, so I think that they don’t necessarily entered her with high expectations, they just hope to get lucky. SHE TAKES HEART will probably try to grab the lead, but I am not even sure that she can. Or if she can, I am pretty sure that she can’t hold on to it…

Number 3, FUHRIOUSLY KISSED is another one seemingly entered hoping for a miracle. She has not won in over a year and never won a stakes race, graded or ungraded. She has managed a few shares of purses in Graded company and I guess that it pays the bill for the owners… Based on her resume, all she can hope is indeed a minor purse and she is a safe pass, barring a miracle.

Number 4, WOW CAT will make her second start in the US after an unsuccessful try last month right here at Saratoga. She came close in that one and might be sharper today, as it was a very long break before the last race. In terms of class, it is a question mark however. Back home in Chile, she dominated a couple of Grade 1 races, but a Grade 1 in Chile is not a grade 1 in the USA… Of note, her trainer is killing it at Saratoga this season and the second race off a layoff has been successful 40% of the time for him so far this year. A couple of pretty sharp workouts say that WOW CAT is still pretty hot and maybe about to score. WOW CAT usually comes from behind but stayed pretty close to the lead in her last race. That strategy could pay off today, but she is facing some mighty opposition.

Number 5 FARRELL is a one speed horse who will go for the lead and try to hang on as long as possible… FARRELL managed to go all the way on this same distance at Saratoga last month, but it was close and today her opposition is way more serious. The good news for FARRELL is that there should be very little pace pressure today, so she should be able to set a reasonable pace. I doubt that it will be enough to keep the wolves at bay however…

Number 6, ELATE is the other major force in this race. Easy winner of a Grade 1 race on this distance last year, she failed to repeat at the Breeder’s Cup and was given a long vacation to recuperate. The break seems to have worked wonders as ELATE came back last month to win a Grade 2 race in easy fashion. This being the second race after a layoff, we can expect an improved performance and the workouts seem to indicate that ELATE is still pretty sharp. ELATE likes to come from just behind the pace and that’s probably exactly the right strategy today. She can handle the distance and the Saratoga track, so if she is at her best, she can win for sure.

In form, ABEL TASMAN should be able to win as she is the most proven at this class level and distance. She was given a break by her trainer and she might be a little rusty, but the workouts certainly seem fine…

ELATE is the other major threat in this race and she will benefit if the pace is a bit hotter. She will make her second start after a layoff and should therefore be a bit better but unless ABEL TASMAN is not at her best, I think that she will fall short.

The surprise could come from WOW CAT. She certainly does not have the track record of her opposition but she also makes a second start of the year for a massively successful trainer this year at Saratoga. It would be quite an upset to see her prevail but the price should be pretty good.

After the Novak (or Novax?) Djokovic visa saga dominated pre-tournament headlines, we can finally look forward to some on-court headlines as the Australian Open gets underway. Djokovic news has taken the focus off of the tournament, which is certainly understandable. After all, the fate of the world number one and top seed would significantly impact END_OF_DOCUMENT_TOKEN_TO_BE_REPLACED