Picks for the Breeders’ Cup 2018 BC Classic at Churchill Downs 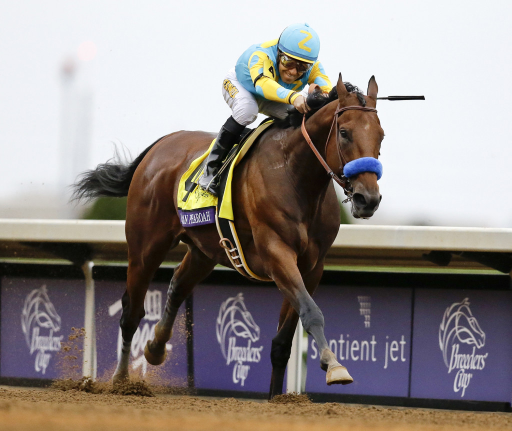 One of the highlights of the horse racing calendar is upon us and oh what an exciting race it is.

All the best horses in the USA and some international stars are all going to go long at Churchill Downs and about half the field has a very reasonable chance of winning.

The outside part of the track has been better at Churchill Downs in recent days and it pays off to be saving energy for the stretch so we should see a winner coming from just behind the leaders. There is not a ton of early speed, so we will likely see some reasonable fractions and therefore I think that the eventual winner of the 2018 Breeder’s Cup Classic will have to stay close in the early going and multiple horses can manage that.

The favorite is very strong and should be hard to beat but a longer odds surprise is possible and there will be a lot of value in the exotic betting pools.

Analysis and picks for the Breeders’ Cup Classic at Churchill Downs on November 3 2018:

Number 1, THUNDER SNOW barely failed to take advantage of the insane pace war that developed in his last race and he just lost the bop of the head to today’s opponent Discreet Lover who also came from behind. THUNDER SNOW has some early speed and with the inside post, he should manage to stay close to the action. The inside of the track is probably not the best though and he might be boxed in leading to the stretch. The last workout is stellar so it looks like THUNDER SNOW is ready to go but his post position is a concern.

Number 2 ROARING LION comes to us from the British Isles where he has been tearing preys apart recently with 4 straight Group 1 wins. All these have been run on the turf however and it will be the first time on dirt for ROARING LION. He tends to stay back in the early going and if he falls back to far, it will be difficult for him even with his late speed. Being boxed inside might also limit his chances so there are enough concerns to take a pass today on ROARING LION.

Number 3, CATHOLIC BOY made a lot of converts at the Belmont Derby when he fought back in the stretch to regain the lead. This much courage is quite rare, and the race was a sight to see. CATHOLIC BOY came back strong to win the Travers at Saratoga and based on his workouts he is ready to go once again. He does seem to like some time off between races so the 2 months gap since the last win is not a concern and the trainer knows how to bring them back to fitness too. CATHOLIC BOY will need to win for the first time against older horses however and his early speed might not be such an advantage today. He is a very strong contender based on his heart though and could very well be on the podium or even in the winner’s circle.

Number 4, GUNNEVERA got beat by Yoshida in the Woodward but to her credit he had to travel on the outside all the way and finished well too so it was not a bad performance against his rival. Today, GUNNEVERA draws the inside with should allow him to save ground but might make his travelling difficult especially if there is indeed a track bias favoring the outside at Churchill Downs. GUNNEVERA has been working out superbly leading to this Breeder’s Cup Classic but has never won on this distance and would need to progress a lot to have a good chance today. It is probably better to leave him out of the betting selections today.

Number 5 LONE SAILOR has yet to crack the 100 on the Beyer Speed Figure scale and will need to go well over that to win in this competitive race. Having never won on the distance or at this class level is also a serious worry and so his LONE SAILOR’s tendency to drift out of contention early, which should be damaging today. Based on his past performances, LONE SAILOR appears outmatched today.

Number 6, MCKINZIE is one of the few horses with good early speed and we can expect him to gun for the lead out of the gate. He should not face a ton of pace pressure which should help somewhat and based on his performance a bit over a month ago, MCKINZIE has a good shot. Based on recent track trends, the winner is likely to come from behind however. MCKINZIE is trying this classic distance for the first time so he might falter in the stretch but a place on the podium is definitely possible. At pretty short odds it is not necessarily a great bet though.

Number 7, WEST COAST finished third in this race last year but has actually failed in every race so far in 2018, finishing second three times. WEST COAST is another one with early speed but being a stable mate of his main early speed foe, we can expect their experienced trainer to ask them not to go head to head too early. Based on his recent workouts, my bet is that WEST COAST is given the lead today and he should be able to go the distance. But he will have to keep horses who beat him previously at bay and at likely short odds I am not sure that WEST COAST is a good bet today.

Number 8, PAVEL took some time off to prepare for this race but his workouts leading to it are not particularly exciting. His trainer is on a hot streak however so maybe PAVEL is ready to go. Going for him is the fact that he won at Churchill Downs in June but never at this distance and PAVEL has had a few tries to shine and failed every time. His racing style and post position are a plus today so a surprise is not impossible but there are horses with more class in this race and he was beat by them multiple times.

Number 9, MENDELSSOHN ran away with Diversify in their last race and opened up insane fractions which led to their eventual defeat, but MENDELSSOHN actually held up better than his rival. Still, we can expect him to try for the lead again and this early speed could be is demise yet again. MENDEHLSON came back to America in the spring and it looks like he has been progressing with every race though falling short every time. The pace is a concern but if there is indeed a track bias favoring the outside, he might stay on for a place.

Number 10, YOSHIDA won the Woodward coming from behind against a few of today’s opponents but was able to save ground throughout so had a bit of an edge there. Today, YOSHIDA will likely travel on the outside but that could actually be an advantage considering the probability of a track bias. YOSHIDA has won coming back from a break in the past and the added distance might be a plus based on his racing style. His jockey knows the track inside-out so he should be able to navigate the field and YOSHIDA could well be overtaking them all in the stretch if he can stay relatively close to the lead.

Number 11, MIND YOUR BISCUITS figures to be placed just behind the leaders and if the outside is the best part of the track, he could capitalize on that position in the stretch. MIND YOUR BISCUITS is trying the distance for the first time and has run best on much shorter. On the other hand, he did win at Churchill Downs about a month ago and has trained pretty well since. MIND YOUR BISCUIT will be in prime striking position but with low odds expected, I am not sure that he is a good win bet or good value on the exotics.

Number 12, AXELROD ran pretty well last out for his first try at the Grade 1 level, especially considering that he got bothered out of the gate. He did finish well against a slow pace so that was an encouraging race. AXELROD is able to stay close to the leaders which should be the right strategy today. He needs to improve further to have a good shot in this race, but the added distance might help him do that. At very long odds, AXELROD is not a bad choice on the exotic tickets.

Number 13, DISCREET LOVER took advantage of the insane pace that Mendelssohn and his rival set in the early goings of their last race and DISCREET LOVER managed to beat him and Thunder Snow at the wire. It was certainly a performance but there is no doubt that the pace was perfect for him and that the rest of his career is not as bright. DISCREET LOVER bounced badly after his fast performance in August and it is likely that he left it all on the field last month. I am therefore not betting on a repeat and I think that DISCREET LOVER will fall short.

Number 14, ACCELERATE is the morning line odds favorite on the back of his incredible 2018 season which saw him win 5 out of 6 with the only loss a near miss. ACCELERATE has the right running style for this Churchill Downs track and being loaded last should help him as he tends to be fractious in the gates. His hot workouts leading to this race indicate that he is ready to go and based on class and speed figures he has what it takes to prevail and should be hard to beat.

Number 15, COLLECTED is on the also eligible list and has been officially scratched.

Number 16, TOAST OF NEW YORK is on the also eligible list and has been scratched.

ACCELERATE holds all the cards with good tactical speed and more class than the field. It is a large field and one is never safe from a surprise, so a win bet a low odds is not very attractive. He is a key in all the exotics bets however.

Another horse figuring to be placed well to strike in the stretch is YOSHIDA and he should play a part in the finish.

I have a soft spot for CATHOLIC BOY because of the character he has shown in past races and he seems to be progressing with every race. This is his hardest test yet though.

After the Novak (or Novax?) Djokovic visa saga dominated pre-tournament headlines, we can finally look forward to some on-court headlines as the Australian Open gets underway. Djokovic news has taken the focus off of the tournament, which is certainly understandable. After all, the fate of the world number one and top seed would significantly impact END_OF_DOCUMENT_TOKEN_TO_BE_REPLACED