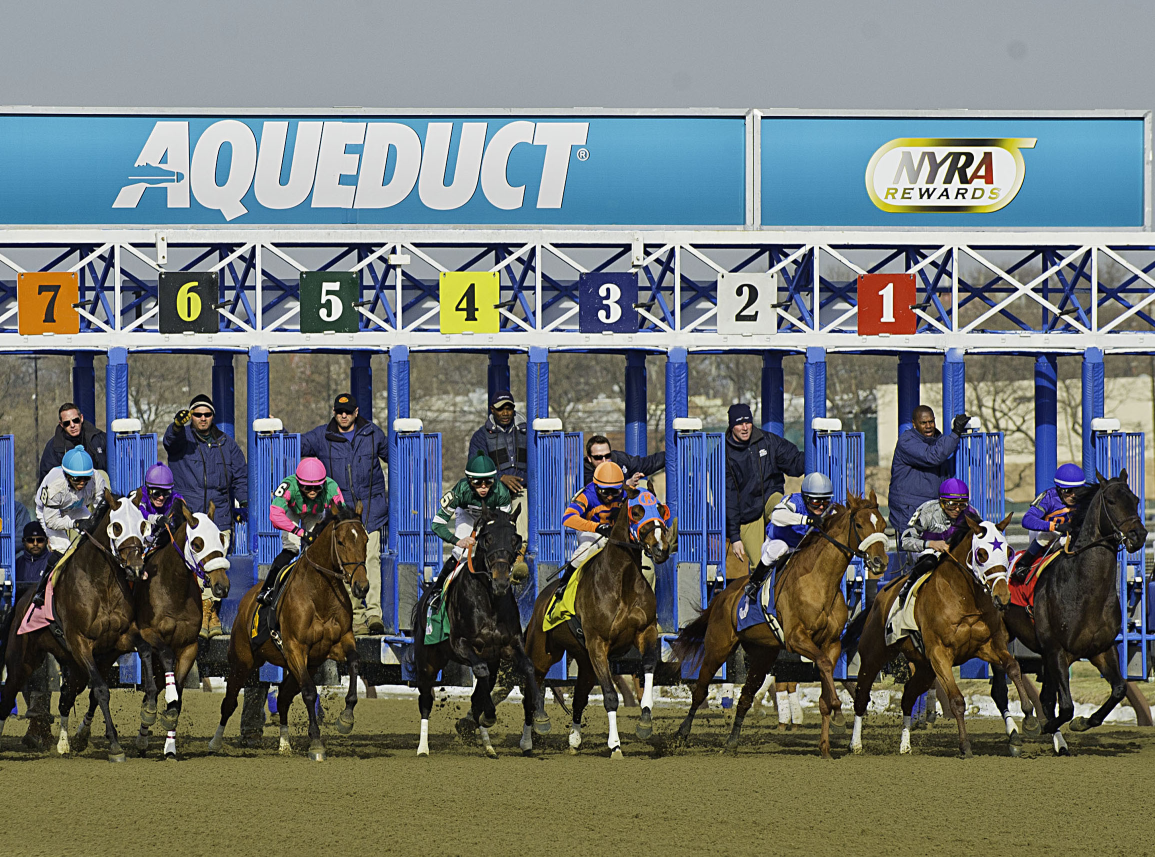 This is not a blockbuster lineup of races today at Aqueduct but there are still some good betting opportunities, including a Pick 6 carryover.

In lower level class races, you can take some shortcuts to remove horses who don’t have their place at that level so that helps in the handicapping. Moreover, Aqueduct has a pretty strong track bias, favoring horses who can take the lead to that helps nailing down some key contenders.

This does not make the Pick 6 easy to win of course but at least it means that you don’t need to break your bankroll trying!

Here are the picks for today’s most interesting horse races at Aqueduct:

Race 1: in Maiden races it pays to have a little bit of experience and even though it is always tempting to bet on the well-bred new faces with hot workouts, statistically speaking it is generally better to bet on a horse with at least one race of experience. We have three of those in this race and all have shown some early speed in their debut. The number 5, Master Distiller, has the best speed figure of the field in his first try but it was a subpar performance and he did not show a lot of early speed, which he would need in this sprint. I will go instead with number 2, DREAM FRIEND. In his first race at the beginning of the year he started strong but lost interest or maybe hurt himself. He was given a big break and a new trainer, who has been doing well on the circuit recently. DREAM FRIEND should have an interesting price on the board and has the right profile if he is in form this time.

Race 3: A route on the inner turf should benefit horses on the inside a bit more and of course, as usual, we need to find horses with sufficient class to prevail on the grass. Unfortunately, this is not a very classy field with a lot of claiming horses and horses who had to wait a while to win their first race… Number 3, FAST TRACK KATHERN, was claimed this summer in a race of similar distance and configuration and raced only once since, not doing so poorly. Maybe with her inside post he can be in the right position to strike again. But a Better choice is probably number 7, AMAZING AUDREY. Her last two races on this distance have been pretty good and the barn is on fire this week. She has the best profile in the race I think.

Race 4: Going from Maiden Special Weight to Maiden Claiming is a major angle in horse racing and we have a couple of candidates who are making the move today. Another strong angle is that you can’t trust horses who make their debut for a price tag. This means that the owners and trainers have no confidence at all in their horse and you can simply pass on them. If the horse turns into a star, good for them, but there is no betting value on it. Here we have a very strong candidate who checks many boxes: WISE STRIKE, the number 2. She did not race too many times, so she is not a perpetual loser. She tried turf a couple of times and comes back to probably a better surface. She is coming down in class, especially if you disregard the turf races. Moreover, her trainer is having a hot week. All signals are green for WISE STRIKE and she is a good bet despite the low odds.

Race 5: Another Maiden Special weight at Aqueduct means another attempt at the same recipe: find a horse with early speed, with some racing experience. There are three MSW candidates but none have been really burning the first furlongs of races so it is hard to judge who truly has speed in the group… We have a strong first timer in the number 3 too, trained by the hottest trainer in town, but statistically it is not a good idea to bet on a first timer in a Maiden race, especially not at a tiny price. A longshot here might be the most interesting bet at Aqueduct today. JASMINESQUE, the number 8, has shown a bit of early intent in her last starts and she did not demerit too much. Maybe she can surprise going all the way and riding a track bias at Aqueduct?

Race 6: This is the most competitive race at Aqueduct today and is pretty hard to decipher. There is a lot of early speed in the race so we should see a horse overtaking everyone in the stretch I believe. Number 1, FLYOFF, has some late speed and a good post position for his running style. He should be able to sit right behind the action and strike in the end. Number 4, RAPT, has a ton of late speed but has not won in over a year. He is coming down in class today though so maybe that can turn the tide for him. At longer odds, ANOTHER, the number 9, is another late speed candidate. He is pretty lightly raced and could take a step up, at least the most recent workout says he is ready to…

Race 7: the main event of the day at Aqueduct is not a massive event but still an interesting stakes race for New York bred horses. One of the favourites, My Boy Tate, has been on a downward spiral of late and added distance is not likely to help him a lot as he seems to lose energy at the end of races. LOKI’S REVENGE, number 4, will make a first start as a gelding and maybe this weight that was cut off from him can help him get back to winning ways. The favorite GOLD FOR THE KING, number 7, has failed a couple of times but not by much and he has a versatile style that can come in handy today if the early speed horses falter. I think that it should play out between number 4 and 7 and I might keep them both on exotic bets.

Race 8: The last leg of the Pick 6 is generally an interesting race and it is the case again today. This is a rare Turf Sprint at Aqueduct and we have a lot of early speed here. That should favor a horse with speed in the stretch but in a sprint you don’t want to fall too far behind so it is best to find a horse with some tactical speed, who can position himself well. MENTALITY, number 8, has the right pace profile and the class to win it. So does HANNAH’S SMILE, number 10. She won her last race at a similar class level and his never far so she is a major threat today.

UPDATE 12:45pm ET, the race 3 has been taken off the turf. The also eligible horses that were waiting for it to happen are the best replacements. Replace the original selection with 14 and 15. Good luck!

After the Novak (or Novax?) Djokovic visa saga dominated pre-tournament headlines, we can finally look forward to some on-court headlines as the Australian Open gets underway. Djokovic news has taken the focus off of the tournament, which is certainly understandable. After all, the fate of the world number one and top seed would significantly impact END_OF_DOCUMENT_TOKEN_TO_BE_REPLACED