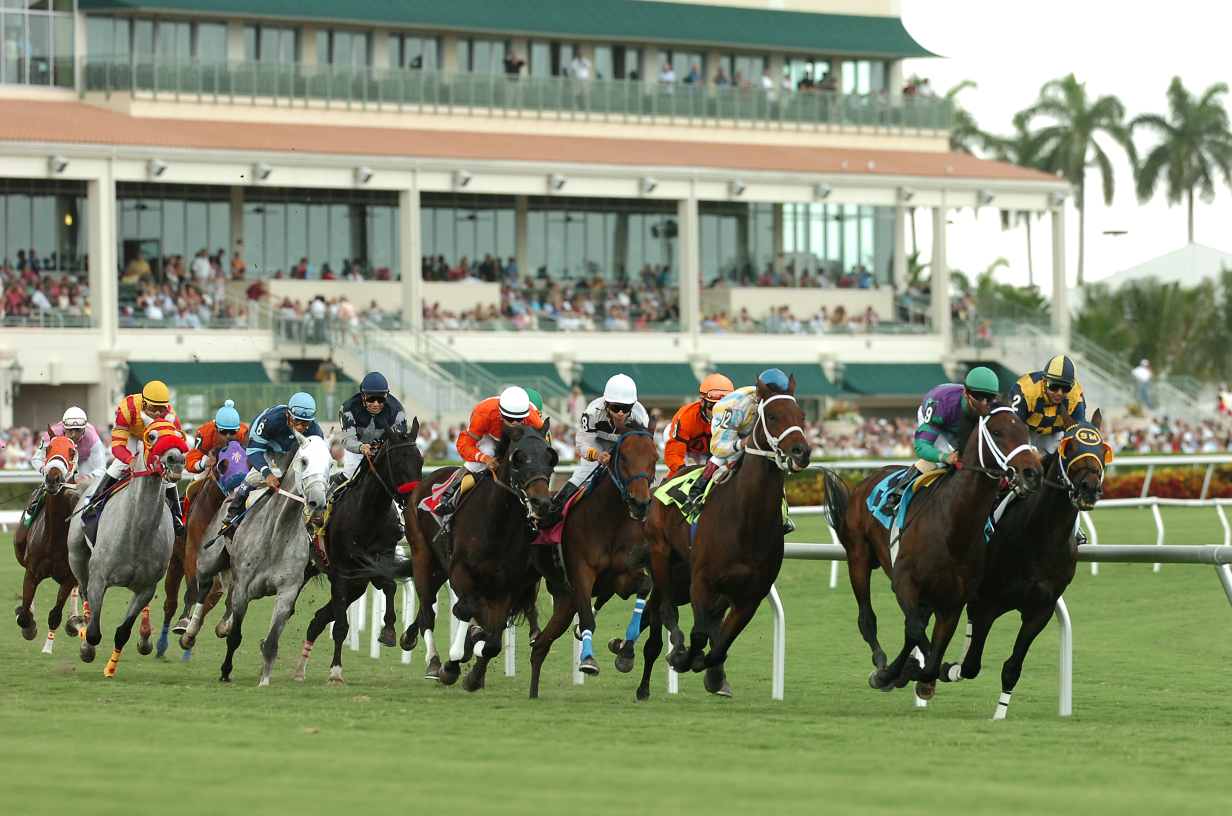 Gulfstream Park being located in the Miami area, a rainstorm washing the race off the turf is a distinct possibility and the weather forecast predicts some rain by the time of the race.

Being ever the optimist, this analysis focuses mostly on the turf record of horses, but I also will give some insights in the event that the race is run on dirt.

Regardless of surface, this is not a very impressive field and the favorite does not have that great a chance I believe.

Analysis and picks for the 4th race at Gulfstream Park on September 9 2018:

Number 1, CHRISTMAS MAGIC tends to go for the lead, which is not a bad idea usually, but today she is likely to get a lot of competition in the early going as at least 2 other horses will challenge her for it. Adding to the challenge is the distance. CHRISTMAS MAGIC has never won over more than 6 furlongs and the close to 1 mile scheduled for today might be the end of the world for her. The last time she attempted a route she faltered quite badly. Based on speed figures and class, CHRISTMAS MAGIC is not out of place, but the pace and distance are a concern and therefore I think she is a bad bet as one of the favorites today.

Number 2 ROSE M. was racing in cheap claiming races all her life. Today she goes up a notch to an optional claiming so her new owner and trainer might see something in her. The trainer usually knows what he is doing with these class jumps so it is encouraging. Still, based on lifetime performances, this race is quite a stretch and at 3 years of age, ROSE M. might be a bit green compared to some of the more seasoned horses. Based on trainer patterns, it is not impossible but ROSE M. winning would be a surprise.

Number 3, BIG DARLING has not won a race in almost a year, racing at this exact same class level at this exact same Gulfstream Park track. Is there a reason to think that she can turn things around today? Not really, except the fact that BIG DARLING is a come from behind horse and that will probably be the winning style today. Considering that BIG DARLING has had good setups with fast pace on longer distances throughout her losing year, I am not sure that she has what it takes to win even in the best circumstances.

Number 4, ANABELLA QUEEN, has not had a productive career since breaking her maiden last year at this period. Since, she stayed in South Florida and competed at some higher-class levels without a lot if success. Today, ANABELLA QUEEN makes a second start at the class level after taking a bit of a break previously. The second start angle is usually good and ANABELLA QUEEN has a strong workout last month to show. She has won pressing the pace and that will probably be the winning strategy today, so I believe that ANABELLA QUEEN has a good chance of finally winning her second race if it stays on the turf. If the race moves to dirt, I am not sure.

Number 5 LONESOME PALM will come down in class for this one and makes a second start since an extended layoff which usually would be pretty strong betting angles. That layoff being her second one of the year is a bit of a concern though. Is LONESOME PALM hindered by some health issues? At her best, she has run quite fast on the Gulfstream Park grounds but even then, she could not close the deal. So far this year, she has performed very poorly so is LONESOME PALM ready to turn things around? Based on what I see, there is not a lot of reasons to thing she is, so it is probably better to just watch LONESOME PALM run today.

Number 6, CALLIE CALIFORNIA comes up in class after a couple of strong races at the cheap claiming level. Repeating these performances would probably be enough to best this field, at least based on speed figures. The issue I see is that there will be some pace pressure on CALLIE CALIFORNIA today and the class level is different. She has a versatile style, but it is still more likely than not that she goes for the lead and faces pressure on it. In the likelihood that the race is taken off the turf, I am even less convinced by her credential and I think that CALLIE CALIFORNA will attract too much betting to be a good choice today. There probably is value in betting against her.

Number 7, PURE ONE is another one who has been in a slump since breaking her maiden but given that this took place this year, she still has a chance for redemption. PURE ONE has run only at Gulfstream Park and only at this class level and has never done well but maybe her racing style can finally pay off as she likes to come from behind. The workouts of PURE ONE are not too encouraging however and she switched from a good turf trainer to a mediocre one in the spring and has fared worse than usual… It does not look like PURE ONE fits at this class level and there is not really signs that today is the day where she earns her second win.

There is much uncertainty about the surface on which this race will be run and the picks change based on surface, of course.

If the turf is good enough to race on, I believe that ANABELLA QUEEN has the best chance considering her racing style and the fact that in a second race after a layoff she should be able to run better.

On the dirt, COMPETITIVE PLAYER has the best profile and will likely offer some value. The pace scenario should benefit her and she appears to be fit.

On both surfaces, the risky and potentially lucrative play might be to add ROSE M. to the exotic bets or maybe a small straight bet. ROSE M. is the greenest of the bunch and makes a jump in class but she switched trainers and maybe her new one was able to extract something more out of her. He seems relatively confident given the jump in class. At the right high odds, ROSE M. is not a bad bet against this pretty weak field.