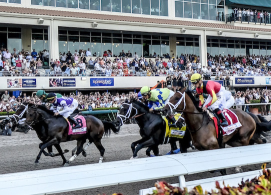 One of the most important Kentucky Derby prepping race is upon us. This is an event that the racing world always looks forward to as the Florida Derby produces a ton of Kentucky Derby winners, the most recent in 2016 and 2017.

Today’s edition of the Florida Derby is pretty wide open and should be an interesting handicapping challenge.

Gulfstream Park tends to have a track bias towards early speed and pace handicapping tells us that there is not a whole lot of it today. A wire-to-wire win is a possibility except that the likely pacesetter is a bit shaky in my view… Moreover, in a big contest like this, some horses might get nervous because of the crowd and push too hard to early and some jockeys might feel the same way too. It is therefore likely to be a contested lead even if the pace figures do not jump out of the page for many horses.

As always, a wide-open horse race means the potential for a big payday if you can whittle it down to key contenders and our analysis below does just that.

Analysis and picks for the 14th race at Gulfstream Park on March 30 2019, The Florida Derby:

Number 1, HIDDEN SCROLL is coming back to the well, again as the expected favorite in the race. But just like I predicted in the Fountain of Youth, I don’t like his chances to go all the way today. The Florida Derby a longer race and HIDDEN SCROLL faltered in the stretch the last time. He did not have such a bad trip so I don’t think he has a lot of excuses. Of course, he had to run very fast, very early in the Fountain of Youth but I don’t think the pace will be so much softer this time. The new jockey might hold him a bit better, but I think that the pressure will be there from other horses and he won’t be able to relax. Starting on the rail is an advantage this time but I don’t think it can help enough. I expect HIDDEN SCROLL to weaken in the stretch again, but he might be able to hang on for a place.

Number 2 CURRENT took a long-ish break since his last race and comes back to dirt after having run mostly on turf throughout his young career. His world class trainer smartly wants to try something new as recent efforts have been disappointing. Strong, steady, workouts are good to see but CURRENT has a long way to go against this field so a win seems unlikely. He has good closing speed so it is possible for CURRENT to claim a minor prize but I don’t think he has much of a chance for the podium

Number 4, BOURBON WAR had a pretty easy trip despite hanging a bit wide in last turn of the Florida Derby so the second place finish is neither undeserved nor an impressive feat. BOURBON WAR closed super-fast on the eventual winner, Code of Honor, and with 10 more yards in the race he would have  won it. He will need another fast pace to race against to be really competitive, but BOURBON WAR has a good chance here today. I am not sure I like the morning line odds price though.

Number 5 EVERFAST has been beaten repeatedly by today’s main contenders and it does not look very likely that he can turn the tables on them. EVERFAST was not able to gain ground despite the fast pace that he was benefiting from in the Fountain of Youth so I don’t see why he would perform much better today.

Number 6, HARD BELLE appears to be completely outmatched on the class scale but his tendency to start fast as a sprinter will have an impact on this Florida Derby. We can expect HARD BELLE to be on the lead or close to it and to spoil the pace for some of the contenders, including Hidden Scroll. HARD BELLE is very unlikely to go all the way but I certainly hope that he creates a fast pace in the early stages.

Number 7, MAXIMUM SECURITY is unbeaten here at Gulfstream Park which is great, but these races were run at a much cheaper class. Not only that. MAXIMUM SECURITY started his career in a Maiden Claiming race, meaning that his connections didn’t have much faith in his abilities to start with. MAXIMUM SECURITY has gone after the lead in every race he took part in and we can expect the same today even despite the change of jockey. The impressive speed figure in the last race is sure to attract money but the pace that MAXIMUM SECURITY was able to set was pretty weak in each of his races and that won’t be as easy today. I also expect him to help set the stage for closers after setting a hot pace throughout and faltering in the stretch.

Number 8, BODEXPRESS is a loser. That should be enough to disqualify him here: not having won a Maiden race and starting in a Grade stakes race. Sure, the workouts are looking good and the trainer is in form but come on… BODEXPRESS might push the pace today, again setting the race up for closers, but if he can break his maiden in a Grade 1 race, I don’t know what is going on in the world anymore.

Number 9, CODE OF HONOR won the Fountain of Youth after a perfect trip so there is certainly a grain of salt to add to that performance. Since that win, CODE OF HONOR has kept in shape and should once again be a force to recon with but the trip might not be as ideal today, starting from an outside post position. CODE OF HONOR will be bet a lot and I think there will be value in betting against him for the win. A podium seems likely though.

Number 10, UNION’S DESTINY was nowhere to be seen in the Fountain of Youth and the previous stakes attempt was also rather weak. There is not a lot to like on paper and UNION’S DESTINY is not likely to be much of a factor today.

Number 11, GARTER AND TIE was beaten by a few opponents in his last race but the trainer is making a change for this one: removing the blinkers. In theory, that should mean a slower pace for GARTER AND TIE and starting from post position 14, we can expect him to settle at the back of the pack. GARTER AND TIE has some late speed so if he manages to navigate the field coming from behind, it is not impossible for a place on the podium at long odds.

Nearly all the preparation races for the Kentucky Derby have been run in a blazing pace, and today’s Florida Derby is likely to unfold the same way. That should mean trouble for the morning line odds favorite, HIDDEN SCROLL, and set the stage for closers.

The second betting favorite, CODE OF HONOR, should once again be very dangerous but I expect that he will have a harder trip and that there will be value in trying to beat him.

The value will be on HARVEY WALLBANGER I believe. I don’t think that his odds will remain so high but even if they halve, I think that this is the horse with the best chance to beat them all at long odds. HARVEY WALLBANGER has good closing speed and runs well rested. He is all set for a big race and I think he will deliver it today.

Behind him, I think that CODE OF HONOUR will be fighting to the finish line and so will BOURBON WAR, another fast closer.

GARTER AND TIE might be another longshot delivering a surprise so there is value in having him on the superfecta at least.

UPDATE 2:30pm: no rain expected and no scratches announced. The picks stand