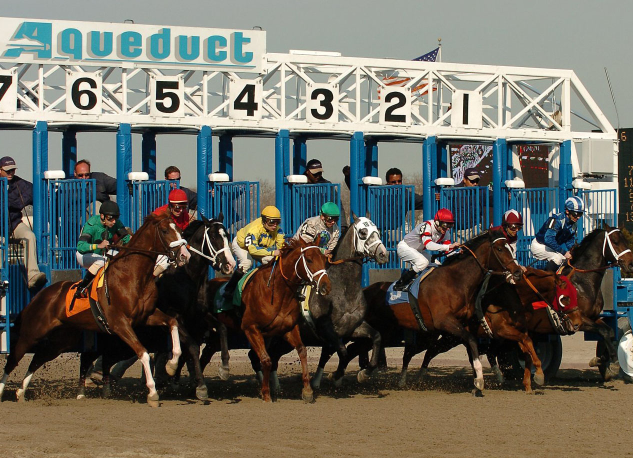 The clock is ticking to qualify into the 2019 Kentucky Derby. Today is one of the last day to run a preparation race and earn the required points while still having a decent time to recuperate before the first Saturday in May.

We have seen many pace wars happening so far and I am quite sure that the jockeys and trainers have taken notice. The wire to wire win by Maximum Security in last’s weeks Florida Derby might be a sign that everybody is trying to keep patient and might get surprised in the end.

If it is the case again today that jockeys and trainers bide their time a bit more, we might see some surprise coming from the outside. The track bias at Aqueduct favors early speed on the outside and we have some strong longshot candidates that fit this profile in this Wood Memorial Stakes today…

Analysis and picks for the Wood Memorial Stakes at Aqueduct on April 6 2019:

Number 1, TAX (9-2) was able to beat Not That Brady when they first met two months ago but TAX might have had the easier trip in that confrontation. TAX has been given a rest since but has been working out well since so it looks like he is ready again. The inside of the track might not be great at Aqueduct today so if TAX is pinned to the rail throughout, he will not only have to find a way out but might tire a bit. Still, he is a strong candidate for a podium.

Number 2 TACITUS (5-2) is the morning line odds favorite on the back of win in the Tampa Bay Derby last month. He had an ideal setup for his running style in that race and I expect that the pace of today’s race will be a bit softer. TACITUS has still a lot to prove in my book and I don’t think that he is worth a gamble at that price. Better to look for value elsewhere.

Number 3, HOFFA’S UNION (6-1) will make a second start and surprisingly switches trainers after having been sold to new owners. The trainer has success with new horses, but it is a big change before a big race… The early speed profile fits today but HOFFA’S UNION is likely going to be the rail horse which should not help. The speed figure earned in the Maiden win looks great but in a wire to wire race, these can get inflated. I believe that HOFFA’S UNION might not have such an easy race this time.

Number 4, HAIKAL (7-2) has a nearly unbeaten track record at Aqueduct so far is of course quite impressive and the speed figure in the Gotham Stakes win looks awesome too. The setup for HAIKAL in that race was perfect pace-wise though and as already stated, I believe that the pace will be a bit tamer today. At low odds, I am not sure that I like HAIKAL but of course the performances so far in his career are very good so a place on the podium is definitely possible.

Number 5 FINAL JEOPARDY (8-1) won his last race in a decent time but apparently did not like to be pressured by the jockey and in a Graded Stakes you generally do not cross the wire first without a little urging… The race prior also did not look very good in terms of horse’s motivation, so it is bettor’s beware with FINAL JEOPARDY I think… With behavioral problems, class questions and decent but not great speed figures, I think that it is a pass on FINAL JEOPARDY.

Number 6, OVERDELIVER (20-1) was given a vacation since his failure to win in much easier stakes race in January. A long pause for a young horse is always questionable and it might be that OVERDELIVER got hurt in the last race. The distance is unproven, the class too, and maybe there is a physical ailment as well. That’s too many questions for my liking and I don’t expect OVERDELIVER to deliver anything today.

Number 7, NOT THAT BRADY (20-1) lost right out of the gate last month with a poor start in a race where you had to stay alert. The pace of the race was just insane and after that slow start, it was all over. In the race before that one NOT THAT BRADY faced a very wide trip on the first turn and stayed too much on the inside afterward. Despite this bad trip, he fought back courageously in the stretch to claim a second place. NOT THAT BRADY has a great track record aside from this poor last race and works for an in-form trainer so there are a lot of reasons to believe that he can rebound. If the pace is a bit easier, he is in the prime position to capitalize on it. I think that NOT THAT BRADY is a great bet at what should be interesting odds.

Number 8, GRUMPS LITTLE TOTS (30-1) finally won a race after a few tries and now goes for the big race under the stewardship of a hot trainer. Maybe he should have been routing all along and maybe the added distance today will help further but it is quite a jump in class… GRUMPS LITTLE TOTS need to improve a lot to have a chance today but he has some early speed to stay in touch with the leaders and that maybe can help claim a place in the superfecta?

Number 9, MATH WIZARD (30-1) has been claimed for a price of 25000 earlier this year, after changing hands a bunch of times for even cheaper prices… since that last sale, MATH WIZARD failed to win at a much cheaper class level, yet he travels all the way to New York to take a gamble on the Wood Memorial Stakes… Of course, the workouts have been blazing but it looks very difficult based on class today.

Number 10, OUTSHINE (6-1) had a perfect trip and pace setup to capitalize on in the Tampa Bay Derby but failed to win. Today he might get another chance, but I doubt that the pace will be as hot and that he can get a perfect trip again, starting from the outside as a pace presser. OUTSHINE has demonstrated that he can stay in touch with the leaders and that might help today if the pace is not so hot but based on the failure in a prime spot last out, I am not sure that OUTSHINE can deliver a win. A Place is possible but the odds won’t be very interesting.

Number 11, JOEVIA (30-1) has shown early speed two starts back and starting from the far outside can help if he has some zip today and the track bias is strong. JOEVIA has not won any of his starts since the maiden win and did not produce amazing speed figures either so it is not very encouraging. The trainer is turning his horse around relatively quickly and it looks like JOEVIA is eager to go based on the recent workout. It seems like a difficult race for JOEVIA but with the perfect setup, a place in the superfecta at very interesting odds is not impossible…

Today’s pick is a gamble but if the jockeys and trainers have paid attention and try to be patient, I think that NOT THAT BRADY can go wire to wire at great odds. The Aqueduct racetrack tends to favor early speed racing on the outside and that’s just what NOT THAT BRADY brings to the table. There is not a lot of opposition so pace handicapping tells us that the pace should be slow enough for a horse like NOT THAT BRADY to go all the way.

The bettors who want to go for the homerun have good options today with big longshots who have an OK chance for a place. I don’t think that the favorites or cheap outsiders have such great profiles so big surprises are possible…