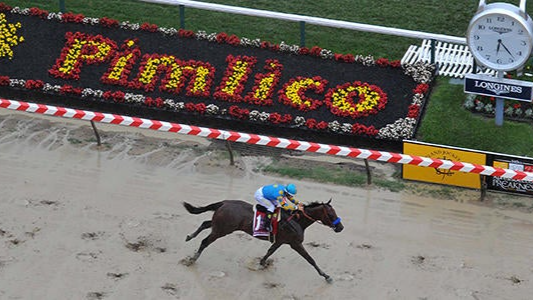 The Preakness offers an unusual handicapping puzzle every year. Players must grapple with fitness as Kentucky Derby contenders meet a host of new shooters.

The Black-Eyed Susan is a Grade 2 run at 9 furlongs on the dirt for 3-year-old fillies. This year’s edition brings 10 entrants.

Only #10 Beautiful Gift has run speed ratings above the average for this level of race. Several others have come close to the average including #6 Iced Latte, #8 The Grass Is Blue, and #9 Adventuring.

Three horses in the races are graded stakes placed, though none have won at this level. The three horses are #1 Army Wife, #5 Lady Traveler, and #10 Beautiful Gift.

One of the strong suits of this field is form. None of the runners have a declining form line over the last 4 races. Four horses in the group possess an inclining form line. They are #3 Spritz, #4 Forever Boss, #5 Lady Traveler, and#9 Adventuring.

The race should have an honest pace as many of the horses have done their best running from on or near the lead. #7 Miss Leslie is the only true closer in the field. I also project #5 Lady Traveler to be far back based on her attempts in route races thus far.

Much has been made this year about the slow-speed figures on the Road to the Kentucky Derby. This is confirmed by the fact that only #4 Crowded Trade has eclipsed the par number for this race.

This field came up week in relation to past Preakness Stakes. It includes 5 graded stakes-winning horses who all have serious question marks.

The race features 3 inclining form patterns with #1 Ram, #3 Medina Spirit, and #8 Unbridled Honor all showing consistent improvement in their last 3 races. #9 Risk Taking has gone in the opposite direction posting consecutive declining speed figures in each of his last 3 starts.

#5 Midnight Bourbon and #10 Concert Tour are what I like to call “baseline” horses. This is because all of their speed figures fall around a very consistent number. The number may be up a few points or down a few points, but they are heavily concentrated around the mean. This will come into play later.

The tricky part about this year’s Preakness is projecting pace. #3 Medina Spirit and #10 Concert Tour both like to be on the lead. Both are trained by Bob Baffert which could lend itself to “team tactics”. This is where the trainer gives the jockeys different directions so the horses don’t hurt one another’s chances. However, the horses are owned by different groups which are unlikely to want to have to sacrifice their horse's best chance in the interest of the trainer’s other runner.

Another issue is that both of the aforementioned runners must pass a drug test prior to running in light of the Medina Spirit drug positive. If one or both fail and have to scratch it could change the entire complexion of the race.

#5 Midnight Bourbon has traditionally been another who likes to be forwardly placed but was slow to go in the Derby. If you consider that race a toss he has to be considered another major pace player.

The wildcard is #7 France Go De Ina. The Japanese horse’s connections have gone on record to say their plan is to place the horse forward as well.

If all four of these horses blister for the front it could potentially set the race up for one of the closers. However, with so many uncertainties there is a real possibility that the race is devoid of pace and sets up for a front runner to wire the field.

Putting It All Together

Perhaps the biggest challenge for any bettor looking to the Preakness is the status of the Baffert runners. If they are in, they are major players both in the pace of the race and likely in the final outcome.

If one or both are removed prior to the running the race becomes chaotic and the pace scenario comes into question.

As a handicapper be ready to adjust on the fly if Friday’s drug test results lead to any scratches.

Assuming Midnight Bourbon runs his average race #1 Ram, #2 Keepmeinmind, and #7 France Go De Ina can be eliminated from the top spot as they have never reached anything close.

#9 Risk Taking can also be eliminated as he has shown declining form which puts him well below the winner.

#8 Unbridled Honor is short on overall numbers but if he continues with his improvement he would be able to reach the Concert Tour number and cannot be automatically eliminated.

It is my belief that Medina Spirit will go to the lead under Johnny Velazquez as he did in the Derby. Midnight Bourbon will apply pressure while Concert Tour sits in behind.

With the exception of #2 Keepmeinmind and #6 Rombauer, I see the rest of the horses sitting in the next flight between 2 and 5 lengths off the lead.

I believe the pace will be relatively moderate and leave enough in the tank for at least one of the front runners to hold on for the victory.

I do not foresee horses from out of the clouds playing any major role in the outcome of the race.

The following wagers are a combination of handicapping opinion and value estimation. The tickets presented here are based on the perceived equilibrium between the value of payout vs. the expectation of the outcome.

All wagers are listed with the base bet amount, horses included, and total cost of the wager in parenthesis.

The most likely outcome of this race is in my opinion is that the winner is one of the three obvious speed players. It also seems very reasonable that forwardly placed horses could hold on to hit the board. However, Concert Tour, Medina Spirit, and Midnight Bourbon are the top 3 speeds and betting choices.

As a handicapper, it is vital to recognize that it is best to take a stand against at least one of these in order to make wagers profitable. The wagers below largely fade Concert Tour as I feel he has received a significant jockey downgrade given Mike Smith’s recent form despite the fact that I think he is a logical contender to win or hit the board.

Best of luck on all of your 2021 Preakness wagers!