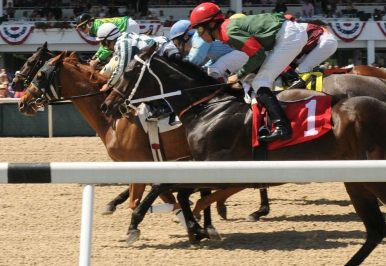 The other Kentucky Derby prep race today is the Tampa Bay Derby ran, you guessed it, at Tampa Bay Downs.

Tampa Bay Downs is not one of the most prestigious racetracks in America but the Tampa Bay Derby still is an important Derby preparation race and has sent a few contenders to Churchill Downs in recent years.

Today’s race is especially interesting because the favorite does not have the best pace profile for this racetrack, which tends to favor horses with early speed. That profile might come in handy in the Kentucky Derby but here it might be a hindrance.

Can the favorite overcome it? He has the best Beyer Speed Figures as a credential at least.

Here is the full analysis of the horses taking part in the 2019 Tampa Bay Derby:

Analysis and picks for the 2019 Tampa Bay Derby:

Number 1, ADMIRE is making a second start this year after not showing much in his return to the track. ADMIRE shows some strong workouts leading to today but so did he last month when he failed against a lesser class. It does not look like ADMIRE has much early speed to bet on and he is probably outclassed in the stretch anyway.

Number 2 SIR WINSTON has been doing well on the distance, but it is important to note that it was on the synthetic track which is another world. He did not show much on dirt and his pace presser profile will not help a lot today in my opinion. SIR WINSTON might overtake a few horses in the stretch but I don’t see any indication he can finish first or second…

Number 3, LORD DRAGON is making a massive jump in class, going from a Maiden Special Weight race to a Grade 2. Not only that, he needed six tries to break his maiden. With little early speed in his profile, I believe that LORD DRAGON will remain at the back of the field throughout.

Number 4, DREAM MAKER, made a winning comeback at a lesser class last month after a disappointing 2018 fall campaign where he failed at short odds in two Grade 1 races. His speed figure jumped in the last outing and DREAM MAKER has a blazing workout since too. The jockey is killing it recently so that will certainly help but given the closer profile of DREAM MAKER, I don’t think that it will help enough. He is likely to come close on the podium, but based on pace handicapping, I don’t see a win happening and at low expected starting odds, I don’t think that there is a lot of value in having him on the exotic tickets.

Number 5 WELL DEFINED has shown good early speed throughout his career and just won impressively at this same distance right here at Tampa Bay last month. Since then, the trainer has kept busy and has ben raking in the wins. The winning jockey of last month is back on board and I bet that he will just try the same strategy: go wire to wire. Being the only true early speed in the race and on a Tampa Bay Down track that favors this profile, I very much like WELL DEFINED’S chances to repeat.

Number 6, OUTSHINE managed to win coming from behind against a slow pace last month which is impressive. Less impressive however was the class and OUTSHINE will face Graded Stakes horses for the first time. He did not show much in his only stakes try last year and with a poor pace profile for this track, I don’t think that OUTSHINE can win but a place on the podium at decent odds is not impossible based on the good last race.

Number 7, WIN WIN WIN has apparently been waiting for this one and has been rested for a while, producing very strong workouts in the interim. The trainer’s barn is hot right now so maybe WIN WIN WIN is ready to win as well. He earned the field’s top speed figure in his last race, destroying an ungraded stakes field in the stretch. WIN WIN WIN seems to be more of a closer, but he has been racing on shorter distances so far so maybe he will be more prominent today, with a new jockey on board too. Based on the speed figure, it would be dumb to not include WIN WIN WIN on the exotic bets at least but given the pace scenario and the favorite status, I will not bet on him for the win.

Number 8, THE RIGHT PATH is making the jump to graded stakes after a loss at a lower-class level. This is not very encouraging, especially not when you consider that he regressed in that race, based on speed figures. He shows great workouts since the loss last month but it would be a surprise is THE RIGHT PATH came close to the podium today.

Number 9, DUNPH lost his three last races, all at stakes level so apparently the connections are very confident in his overall abilities. The last loss was severe though and since he has even trained in turf, so it looks like the trainer is a bit confused about his horse. DUNPH seems outclassed and will most likely not be much of a presence throughout.

Number 10, TACITUS is making a comeback to the track after taking the winter off. This Kentucky Derby preparation race seems like a big test for a comeback and looking at the workouts, it is not certain that TACITUS is fully back to fitness either.

Number 11, ZENDEN has shown ability to press the pace and survive so endurance is probably not an issue, even if he never ran so far. The trainer is in form and so is the jockey so maybe ZENDEN will have an extra spring in his step in this contest. Still, pressing the pace here might not be enough to be first to the finish line as the pace is likely to be mild. A place on the podium is possible however and the odds should be interesting.

There is only one true early speed horse in the field, and he is starting from a perfect position for this racetrack. If like me, you are a proponent of pace handicapping, the number 5 WELL DEFINED looks like a great bet.

Of course, the favorite is an impressive presence based on the speed figure and he will likely put up enough of a fight to be in the Exacta but I don’t think that the Exacta would pay much.

I will however include that favorite WIN WIN WIN in the trifecta as him being out of the top 3 is pretty unlikely.

DREAM MAKER has a similar profile as the favorite and has a chance, but I don’t like the pace profile or the odds. I think that it is worth having him on trifectas but there will be little value above that I believe.

Behind these two contenders, I believe that a couple of horses that fly a bit under the radar have a chance to make an impression.

OUTSHINE has never experienced this class but the win last month was pretty impressive considering the setup. He might be able to close fast again and grab a share of the purse.

Similarly, ZENDEN has shown ability to stay close to the lead and with an expected slow pace, he might be able to hang on for prize money as well.