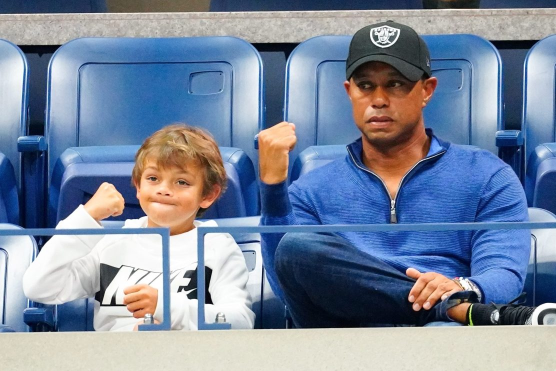 With the PGA Tour, European Tour, and LPGA hitting their holiday breaks, the golf world will have their eyes on the PNC Championship this weekend.

The stipulation to be eligible for the event is the PGA Tour pro must have won a major tournament or the Players Championship at some point in their career.

While this two-day tournament usually flies under the radar, the event has been grabbing a little bit of extra attention this year as Tiger Woods has announced he will be competing alongside his eleven-year-old son, Charlie.

Not only will this be the first time that Charlie will be playing in front of a public audience, but he will also be the youngest ever competitor at the event.

Clips of Charlie’s swing and pictures of leaderboards at youth events that he’s dominated have slowly leaked through social media this year and all signs indicate that he’s inherited some of his dad’s talent.

William Hill has Team Woods set at fourth on the odds list at +600.

Odds to Win the PNC Championship

William Hill is one of the few sportsbooks currently offering odds on this weekend’s PNC Championship. They have Justin Thomas and his father, Mike Thomas, set as the betting favorites at +275. Team Thomas will be making their debut at the event, but they’re set as favorites for good reason.

Mike Thomas, while never competing on the PGA Tour, is a certified PGA Professional and is well known as the one who coached Justin throughout his early life and career. Mike may have never received his Tour card, but you can be certain that he’ll have one of the best swings at the event.

If you’re going to bet on the event, you should at least be aware of the format. The tournament will be shorter than PGA Tour events, as it will just span across just 36 holes on Saturday and Sunday. Partners will compete in a 2-person scramble format for both days.

If you’re unfamiliar with scramble, it’s a rule set in which both partners hit each ball and then determine which of their shots they want to use next. After deciding which ball to use, the partner whose shot wasn’t used will pick up their ball and drop it where their partners shot ended up.

Given that a scramble format is being used, you can expect the teams to use the PGA Tour players shot on most occasions, but partners may be important when it comes to the short game and putting.

The event is set to take place at the Ritz-Carlton Golf Club in Orlando, Florida and broadcast on NBC.

Betting Strategies for the PNC Championship

There aren’t very many betting strategies one can employ when wagering on an event that includes non-professionals, so we can throw things like stats and course handicapping out the window.

In these types of events, it’s best to keep things simple. We know it’s a scramble format, which means most shots used will be those taken by the PGA Tour pro. So the question is, who is the best qualifying player that is competing in the event?

The easy answer to that question is Justin Thomas and it’s another reason why he is number one on the odds list. While Bubba Watson, Matt Kuchar, and Tiger Woods are still actively successful on Tour, none of them are playing at quite the level of Justin Thomas, who was a two-time winner in the 2020 PGA Tour season.

Another strategy that you can use is looking at past winners. Bernhard Langer and Jason Langer are the defending champions, having won last year’s event in a playoff against Team Goosen and Team Lehman. Bernhard has actually won the event a total of four times, twice with his son Jason and twice with his other son Stefan. Despite him getting up there in age, Team Langer is worth a look at +800.