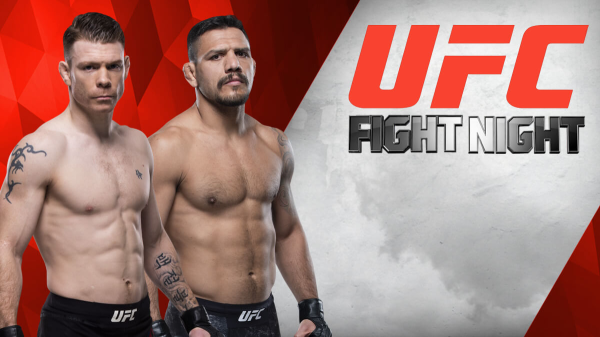 The unending rivalry between former champion Rafael dos Anjos and persistent Paul Felder continues on Saturday the 14th of November in the UFC Main Event: Fight Night. The Lightweight Division tops the charts this Saturday as these two go head to head in Las Vegas.

Rafael dos Anjos was originally set to fight Islam Makhachev. However, Makhachev had to withdraw due to an injury that was not disclosed to the public. Paul Felder stepped up to the plate to replace Makhachev on short notice. Despite these changes, it is clear that UFC fans all over the world will not be disappointed as this fight promises to be epic as the two pressure strikers face off. You can watch the UFC on ESPN.

Paul Felder is entering this matchup after suffering a defeat to Dan Hooker in February, following a retirement announcement. The Irish Dragon feels he should have the split-second decision win in the match against Dan Hooker, and he has been extremely outspoken about it. The Irish Dragon has a background in Taekwondo and Muay Thai, and he combines these, his excellent pressure fighting skills and creativity to do a lot of damage to his opponents. The 36-year-old has the odds stacked against him, with fans and bettors considering the fact that he had considered retiring and taking to the sidelines as a color commentator. However, he is a tough contender and looks like he can still bloody his opponent if he wishes. Having taken some time off may have caused him to be rejuvenated and ready to rumble.

Paul was originally set to be a part of the broadcast team, but following the series of events, he is now one of the contenders in this Main Event and is ranked No. 7 in the Lightweight Division.

Dos Anjos is a well-rounded mixed martial arts fighter. The 36 years old Brazillian is a former lightweight titleholder with matchups against numerous UFC stars under his belt, both in the lightweight and welterweight divisions. Dos Anjos has lost his share of battles, including to the current Welterweight champion Kamaru Usman and former interim champions Colby Covington and Tony Ferguson.

Dos Anjos has very noteworthy victories to his name, including against former Welterweight champion Robbie Lawler, UFC icon Nate Diaz, and former Lightweight champion Benson Henderson. However, Dos Anjos has lost four of his last five matchups and is considered to be declining, but we believe he is still capable of competing at world-class levels.

Dos Anjos is an experienced fighter and is more extensively experienced than his opponent, Paul Felder. His straight forward fighting style has earned him five Performances of the Night bonuses, and there are no reasons why he would not give the fight his all on Saturday.