Pacquiao Defeats Thurman; How Will That Result Impact Their Future Bouts? 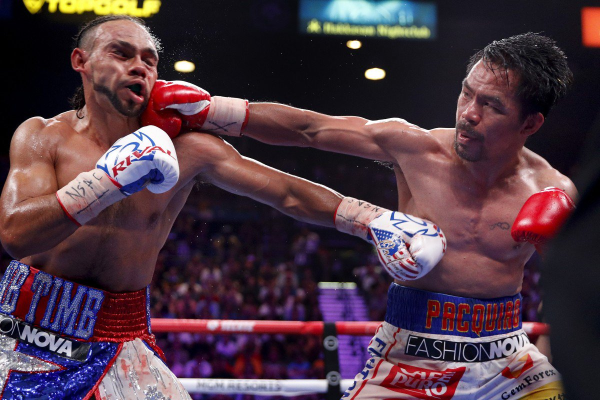 My, oh my, Manny Pacquiao has defied the odds once more, this time, defeating the undefeated phenom in Keith Thurman for the WBA welterweight title. Although the fight went to a split decision, I, along with many others, thought that Pacquiao won clearly.

It isn’t that often these days that such a high-level bout that went to the judges would sway into the true winner’s circle, but it did last Saturday.

The fight started off just about as good as it could for Manny, who dropped the previously undefeated Thurman with a huge right hook that sent him to the mat. Afterward, Thurman would recover well from the shot, but still would be stuck being outpaced by Pacquiao for the first few rounds.

In the later rounds, particularly the 5th-7th, there was a momentum shift happening in favor of Thurman. He would land consistently and at a better pace than the opening rounds, not letting Manny throw as much volume.

Thurman was also utilizing his angles more effectively as well.

However, Manny would have a strong 8th round, coming out with a similar pace that he did in the early goings of the fight. Round 9 came along and would be a bit of a toss-up, as both guys had slowed down a bit, or though it seemed.

Round 10 came along, and Pacquiao stole the show with a crippling hook to the body that hurt Thurman, and he wore it proudly. To my surprise, Thurman wasn’t dropped by the blow and was able to shake it off, but it certainly would take a lot out of him heading into the final two rounds of the fight.

Rounds 11 and 12 weren’t the most exciting out of the bout, but one thing was pretty certain at the end, Manny Pacquiao at age 40 just claimed yet another title in a fight quite a few experts felt he would have been finished in.

After the fight, I think a few things are clear. For one, Manny Pacquiao has seemingly defied father time and just looks fantastic at this latter part of his career. For Thurman, he showed once again how much grit and determination he possesses, and I think he is still one of the best in the world and shouldn’t be taken lightly by anyone who crosses paths with him next.

I think the odds will still go against Manny whoever he faces next, just as he’s really been an underdog his entire career. I don’t think this is the last time we see Pacquiao compete, although some rumors have speculated that he’ll be hanging up his gloves after beating Thurman.

However, I think he just looks too good right now, and he has some amazing opportunities to keep cementing his legacy further, which I believe he will.

For Thurman, I’m not exactly sure who he’ll face next. However, I think oddsmakers are going to assume that he is on the decline, given his first loss and him coming off of injuries. However, I think he’ll be a great pick if he ends up being an underdog in his next bout.

What I like for Thurman here is that he has experienced defeat now. The pressure of that “0” in his record is taken off his shoulders, and he can finally settle into his groove again; which I think we’ll see him do.