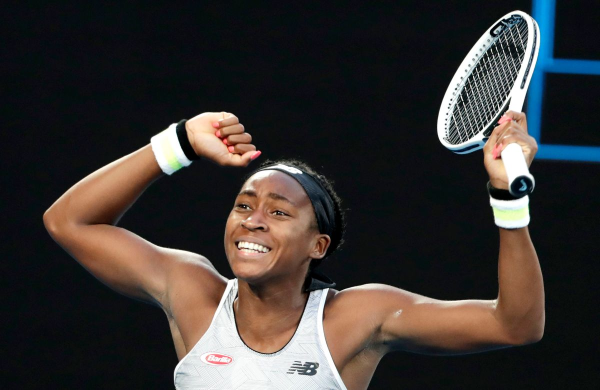 As the world’s former top-ranked women’s tennis player and defending champion of the Australian Open, Naomi Osaka was set for a deep tournament run. Then she ran into 15-year-old Coco Gauff.

The American has now become the youngest player in the professional era to take down the reigning women’s champ at the Australian Open, topping Osaka 6-3, 6-4 in the third round on Friday.

Gauff consistently forced Osaka into mistakes at Melbourne Park while battering her opponent with powerful serves. While Gauff committed just 17 unforced errors, Osaka made 30. That disparity was enough to cause the defending champion to fall.

Osaka, who’s only 22 years old, reached No. 1 in women’s tennis after winning the 2018 US Open and the 2019 Australian Open. Yet the third-seeded Osaka didn’t have enough to overcome Gauff.

After the victory, Gauff reacted with some disbelief. “Honestly, like, what is my life?” Gauff said. “Two years ago, I lost first round in juniors, and now I’m here. This is crazy.”

Gauff now advances to the fourth round, where she’ll face a fellow American in 14th-seeded Sofia Kenin.

Serena Edged Out By Wang

Although the Gauff upset over Osaka was the most shocking result of the day, it wasn’t the only big upset. Earlier on, 27th-seeded Wang Qiang took down eighth-seeded Serena Williams in three sets, 6-4, 6-7 (2), 7-5.

The 23-time major champion made her earliest exit at the Australian Open in 14 years after failing to complete the comeback. Williams now continues her search for a 24th major trophy after collecting her 23rd at the 2017 Australian Open while pregnant.

The last time these two players met, Serena dominated Wang. The American needed less than one hour to earn the 6-1, 6-0 victory.

It was a different story this time, however, as Wang gained the advantage after a nearly-flawless first set and then stifled Williams’ comeback attempts in the third set.

After losing, Williams said, “I didn’t return like Serena. Honestly, if we were just honest with ourselves, I lost that match.”

At the beginning of the tournament, few would have expected Gauff or Wang to make it out of the third round. But after Gauff took down Osaka and Wang upset Williams, both players now have a chance to win the Australian Open.

While neither woman is considered a favorite at this point, both have shown the ability to defeat talented and accomplished opponents.

Ashleigh Barty is the odds-on favorite to win the tournament with odds of +280. Barty is followed by the trio of Karolina Pliskova, Petra Kvitova, and Simona Halep, who all own +600 odds.

With the fifth-best odds to win the Australian Open, Gauff is next on the list at +1500. Gauff’s opponent, Kenin, is only two spots behind with the seventh-best odds of +1800.

Wang is a bigger longshot than either Gauff or Kenin, but her +3000 odds are much better than the +5500 odds of her next opponent, Jabeur.

No matter the results going forward, Gauff has done enough to prove that she can be a staple at the top of the women’s game for well over a decade if she continues to better her game and add to the talent she’s shown us thus far.