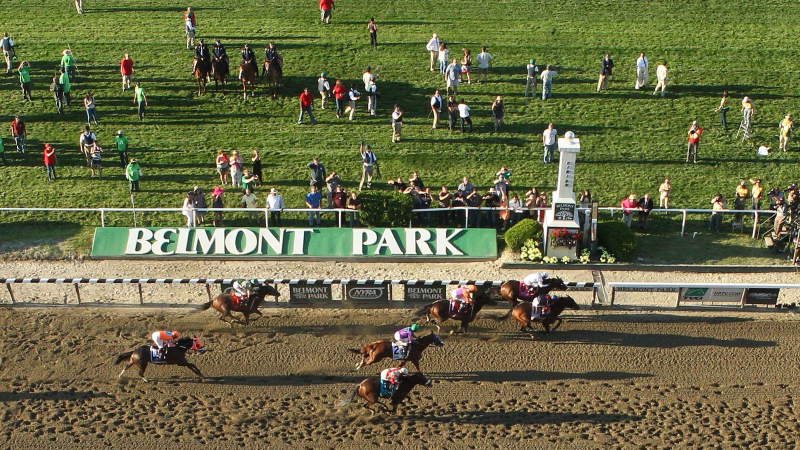 The morning-line favourite, number 4 FLEET IRISH, is dropping seriously in class and has been rested for over 75 days.

The recent workouts are not particularly impressive and it is not like he was killing it in the previous races… One needs to consider that he was facing much harder competition but still.

With the potential of being an injured horse, with dubious record including no win at the distance and weak pace at a generally speed favouring track, I believe FLEET IRISH to be a favourite to beat.

To beat FLEET IRISH in the 3rd race of Belmont Park on June 30 2018, I am looking at a couple different horses but first an overview of the field:

Number 1 SET ME UP, might have been unsuited for the wet in his only dirt outing this year. Belmont Park at this distance tends to favour the inside rail position which SET ME UP is likely to get if he shows the same speed instincts on dirt than he did on turf. Speaking of turf, SET ME UP has made a career on it and that has not been so successful so far… Maybe it will turn out that he prefers the dirt? Today he has the right conditions in play to show it. With a hot jockey on board, blinkers for the first time and a drop in class, it might be his day and with high odds, an interesting bet.

Number 2 QUAI VOLTAIRE did break his maiden on a route race and did win at Belmont Park at 7 furlongs a couple of months ago. These are his two only wins though and in a career of 25 races coming in today, that’s not a great record. One key factor for today is the number of speed horses in the race and the fact that QUAI VOLTAIRE tends to be a come-from-behind horse. If a heated pace race takes place, it is possible that QUAI VOLTAIRE might grab a place or maybe even its third win lifetime… The odds on the horse should not be bad as he is given a 12-1 morning line so if you believe that the speed horses will go at it hard and tire in the stretch, QUAI VOLTAIRE might be your horse.

Number 3 POLAR CITY is a speed horse who could steal the rail if SET ME UP starts slowly. Winner on this track last month at the top of the class requirement, POLAR CITY is once again coming in with the proper class and a better profile than the likely favorite, number 4 FLEET IRISH. If the morning line odds stay about true (4/1 or so), POLAR CITY might be a value bet against a weak favorite.

Number 5, MAIMO, is looking to start at low odds, possibly as favorite. MAIMO has a pretty strong claim in the race with the right pace profile (early speed), competitive speed figures for the class and a big drop in class from pretty successful races in the last 5 starts. It kind of sounds too good to be true and one needs to wonder why a horse who won just over a month ago in a 25000 claiming race is racing today in a 14000 claimer… The horse starts on a very short rest of 7 days which might be a sign that he is raring to go despite the loss at the allowance class. However, the trainer Chad Summers is not particularly experienced and does not have a history of success with this strategy. Considering its outside post position and the speed of POLAR CITY and FLEET IRISH on the inside, MAIMO might be parked on the outside for the whole race which cannot help…For all these reasons I am willing to bet against MAIMO today considering the low odds he will drag as well.

Number 6, KENYAN, holds the best speed figure of all in his last race and tends to be pretty steady in his performances. Unfortunately these performances are pretty mediocre and with no win in his last 10+ starts at this class level, there is not a lot of hope that he will break through today… Despite that, the horse is given a 3-1 morning line which would be a terrible bet in my view. I would not even touch him at 10-1 to be honest…

CONCLUSION: I do not like the short prices in this race at all and I believe we are going to see a couple of outsiders come in.

Number 1 SET ME UP might surprise today and if his odds drift closer to 20-1 it will be time to gamble on a win bet!

Number 2 QUAI VOLTAIRE would be favoured by a hot pace and can overtake them all in the stretch. I think that a few people will imagine the same thing and doubt that the morning line odds of 12-1 will hold but if they do, a win bet on number 2 is a solid choice.

The game plan is to take a stand against the favourites and therefore the best bet in my opinion will be the Exacta or the Trifecta, boxing these horses and hoping for a upset.