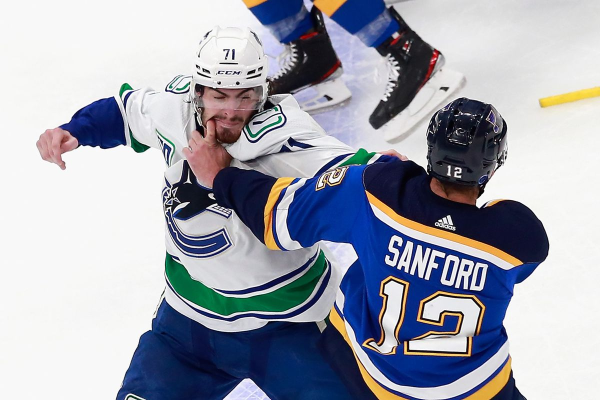 The Western Conference matchup between the Vancouver Canucks and St. Louis Blues has been one of the closest series of the NHL Playoffs so far. The series is tied 2-2 heading into a crucial game five on Wednesday night. Vancouver took the first two games of the series, but St. Louis came storming back in games three and four to even it up. The young and hungry Canucks team came flying out of the gate, but the defending champion Blues have since found their game. Game five will be a huge one, as the winner will be one win away from advancing, and the loser on the brink of elimination.

Game 1: The first game of this series left many in the hockey world a bit surprised. Vancouver handled the Blues rather easily, despite being significantly less experienced and the lower seed. The Canucks grabbed a 5-2 win in a game was wasn’t really close.

Game 2: The second game of the series was much more even, but still saw the Canucks skate away with a victory. Vancouver won the game in overtime by a score of 4-3. Questions about St. Louis began to pour in after the game two loss, but the defending champs knew a few adjustments could turn the series around.

Game 3: St. Louis made a goaltending change heading into game three of the series. Jake Allen took over in net for last season’s hero Jordan Binnington. The Blues responded to the change with a much better game and an overtime win of their own. Allen played outstanding as the Blues got back into the series with a 3-2 OT victory.

Game 4: In game four, the Blues looked like the Blues of last season that won the Stanley Cup. They dominated most of the game and skated to a 3-1 victory in a game that was much more one-sided than the score would indicate. That tied the series up, and now the Blues have the momentum heading into game five.

What to Expect in Game 5

Game 5 of this series will take place on Wednesday, August 19th at 10:30pm ET. It can be seen nationally in the U.S. on NBCSN. This could be the most important game of the series, as whoever takes a 3-2 lead has a much higher chance of winning the series. The Canucks are a very young and hungry team. This is their first time in the playoffs since 2015. They are lead by a young core who do not want their season to end. However, with that youth comes inexperience. Many of these Canucks players have never been in a position like this before. It will be interesting to see how they respond. On the other side, there’s the St. Louis Blues. The Blues are a battle-hardened, experienced group who won the Stanley Cup just last year. This team has been through many playoff battles and should know how to react in this type of game. St. Louis also has all the momentum going in their favor after winning the last two games. Vancouver will have to find a way to break that if they’re going to win.

The St. Louis Blues are the favorite heading into this game. They have more experience, all the momentum, and are the defending champions after all. However, that doesn’t mean one should count out the Canucks. Vancouver has proven that they can beat the Blues. When they are playing their best, the Canuck’s speed can overwhelm St. Louis and lead to a lot of offensive chances. This has been a very close series, and there’s no reason to think this won’t be a very close game. At the end of the day, I’m going to go with the underdog in this one. If Vancouver can find a way to solve Jake Allen, they will win this game. I think the Canucks can do it and take the 3-2 series lead in game five.