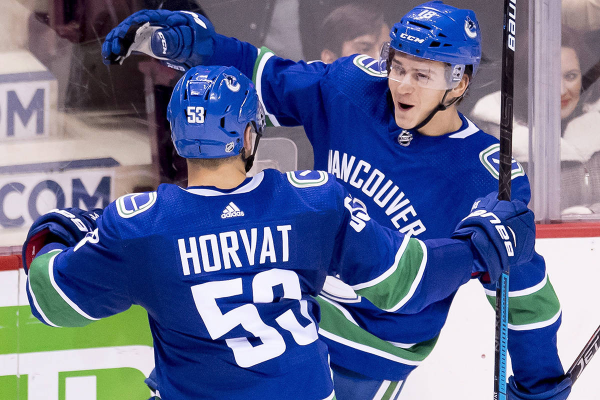 One of the more entertaining series of the postseason takes the ice tonight for a pivotal Game 5. The Vancouver Canucks and St. Louis Blues are knotted up at two games apiece, with are both ready to fight for a Game 5 win that will put one of them on the brink of advancing and the other of elimination.

Here is a preview for Wednesday’s contest between the Canucks and Blues, along with a brief series recap and free pick. St. Louis is coming into the game as the -150 favorite.

This series started a week ago with a dominant effort by the Canucks. Led by a pair of goals from C Bo Horvat, Vancouver trounced St. Louis 5-2 to take Game 1. Horvat, C Elias Pettersson, and LW J.T. Miller all scored on the power play, as the team went three-for-six with the extra attacker. G Jacob Markstrom was also solid in net, making 29 saves to earn the win.

Horvat was the hero once again in Game 2, scoring a short-handed goal early and then the overtime game-winner to lift the Canucks to a 4-3 win. Pettersson and LW Tanner Pearson also scored for Vancouver, with Pettersson scoring on the power play again. St. Louis had goals from C Ryan O’Reilly, RW Sammy Blais, and LW Jaden Schwartz, with Schwartz’s goal coming with seven seconds left in regulation to tie the game.

Fast forward to Game 3, another overtime thriller that had the Blues on the verge of going down 0-3 in the series. But C Brayden Schenn sniped the overtime winner to win 3-2 for St. Louis and get them on the board for the series. D Justin Faulk and LW David Perron scored their first goals of the series as well, while Jake Allen stepped into goal to replace Jordan Binnington and made 39 saves Miller and Pettersson each scored for Vancouver again as well.

Then lastly, in Game 4 on Monday, the Blues started to look reminiscent of last year’s Stanley Cup team. O’Reilly’s two goals, along with another solid performance from Allen, sparked a 3-1 win for St. Louis to even up the series. Special teams was the x-factor for the Blues, as not only did O’Reilly and D Alex Pietrangelo each score on the power play, but the penalty kill squashed all seven opportunities Vancouver had to score with the extra man.

Vancouver will win if the power play brushes off Game 4. Through the first three games, the Canucks scored a whopping five goals on the power play. Then in Game 4, it all changed for Vancouver, who had seven power-play chances and failed to convert on any of them.

St. Louis will win if Allen continues to dazzle. Binnington, last year’s hero for the Cup champions, struggled mightily since the season resumed this month in Edmonton. The second-year netminder is 0-4 this postseason with a 4.27 GAA and .862 save percentage.

Coach Craig Berube decided to turn to the backup Allen, who has flourished the last two wins stopping 61 of 64 shots. Allen’s tremendous play in net has helped the Blues overcome the loss of RW Vladimir Tarasenko on their offense. If Vancouver still can’t figure out Allen, the Blues will be in very good shape.

It is a best-of-3 series now, with both teams having great games as well as concerning ones. The Blues are certainly the hotter team right now, but the Canucks can turn things around quickly.

Expect a low-scoring affair. St. Louis is back to being a strong defensive team, while Vancouver’s crazy power play rate has leveled out to open the series. In this pivotal Game 5, I think the Canucks figure out Allen a little bit, giving them the slight edge in this edge.