Vancouver Canucks, is their 2019-20 resurgence a fraud? 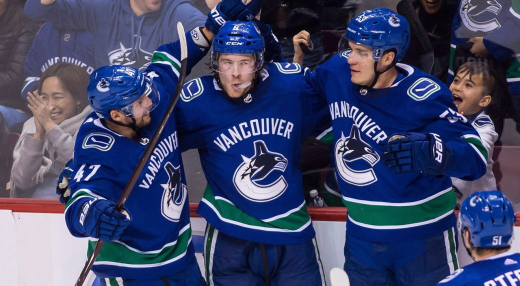 Masochistic kink is not the sole proclivity of the S&M crowd,

Any Vancouver Canucks fan can tell you that, 50 years of incompetent management (Burke, Quinn and Gillis being the exceptions…depending on who you ask and what beer they are on) The typical Canuck fan has leaned to take his pleasure in not what the team can’t do do (Win), but what it can’t (Choke when good, circle the bowl endlessly when they are bad, and ultimately, clog the throne, thus the stink never really goes away) Be it out of control real estate prices, or it’s Hockey team, Vancouverites have developed a suffering fetish.

People wonder endlessly about the traditional “Riots” held at Stanley Cup final defeats. And without admitting to anything, let me just say…”I knew a guy who helped turn over Cop cars in 94′, he ran though Eaton’s (Whoa I’m old….HE’s old) and managed to trash the women’s make-up display before the sirens got too close…so I hear anyway. And if that guy were here he would tell you “You aren’t from Vancouver, you’ll NEVER get it” while everyone who was would nod their head. The team had been bad boys, we had been naughty, fans, they city needed to be tied up in a leather mask and FLOGGED (Figuratively speaking)

It’s a legacy of failure almost unparalleled in pro sports, grasping defeat from the Jaws of victory, with such seminal moments as: The entire team no-showing game 7 of the 94′ final, except for Captain Trevor Linden who was heard screaming as they injected freezing directly into the ribs Messier had intentional broken in game 6. While Linden put on one of the greatest individual performances ever in the Cup final, scoring all the team’s goals, and almost Single-handily dragging his battered companions over the finish lime to glory, the rest of the team seemed to think pre-season had started early. Break out the Cat-o-nines, someone needs a spanking.

2003, when Tod Bertuzzi told Minnesota fans, we won’t be back for game 6..but in fact they were, before being eliminated in game 7 at home in a way that can only be called “Bullying” I guess no one told them we get off on that sort of thing.

Or 2011, when the at that time “Most hated team in hockey” had waged a seven game WAR with the Boston Bruins, that had resulted in broken necks, career ending concussions and enough feuding in the press to make Trump himself, watch the series and take notes…Living in L.A I had a friend, a Ducks season ticket holder call and congratulate me on our first cup, because we were obviously going to win.

No, I told him…THIS is how it’s going to go down: The Canuck are going to no-show, the Bruins are going to destroy them, and before Chara picks up the Cup, the riot will be on. I actually got him to bet $200 on it, you know who won. “But how did you know? He asked”…”Because we like it when it HURTS!!!” I screamed in a much creepier way than I had intended.

In light of our shared history, the Jim Benning era (Curse?) has been gruelling, but predictable. The Canucks get stuck with an incompetent GM (“Oli Joulevi reminds me of Nick Lidstrom”, “Louis Eriksson is just what we need” “We drafted Virtanen because he’s ready for the NHL” “Heeeey…let’s draft a RUSSIAN to Vancouver” “Brandon Sutter, foundational player” I could go on for HOURS..) And spends nearly 6 years trying to make the playoffs THAT YEAR. When the fans at home KNOW they could do a better job than the GM, you’ve got “issues” Because no one who didn’t like pain could sit through those years of bumbling and comeback for more.

Now to the crux of the matter, the Canucks haven’t been themselves.  They’ve been WINNING, leading the division, headed for their first play off berth since before gender neutrality was a pre-requisite for working in Holly wood. Some say new addition J.T Miller’s massive offensive uptick is the reason, others say Calder front-runner Quinton Hughes is to thank…The truth? NONE of the above.

The Canucks were getting PP’s called in their favor….LOTS of them, and at critical times, oftentimes, the other team was FURIOUS at what were clearly “iffy” calls, many of these calls came back to back, when the Canucks were DOWN in the game and needing help.

Not feeling it? Than let me tighten the straps. The Canucks have received BY FAR, than any other team in the NHL, everyone else is around even, give or take, the Canucks have enjoyed a significant advantage over every other NHL team this season when it comes to the extra man,  Now, key’s look at their games :

Now I will jump to random games this year and see what I find.

I think I have made my point.

There is a huge president for this in the NHL, Sam Pollck, legendary Canadiens GM was famously quoted, when another GM complained about scoring being down “Call more penalties” When the NHL wants to influence an outcome, it does so through it’s referees, this incidentally is the reason why they are so often maligned. NHL refs are OFTEN marching under orders to give the advantage to a particular team.

So why the Canucks? I’ll tell you why, their owner is such an insufferable human being, he hunted for a GM to replace Jim Benning WHILE BENNING WAS STILL IN OFFICE, and was turned down flat by EVERYONE (Dean Lombardi had to tell him “Stop calling me.” “Lose my number” NOBODY wants to work for this notoriously meddling and unrealistic owner. Trevor Linden left the organization when Benning and Aqua had cooked up a deal to trade Hughes for Erik Karlsson. Linden said “If you do that I QUIT” Aquallini came back with the old “You can’t quit! Your FIRED!” The only reason the deal wasn’t made was that The Senetors stalled, hoping first for Miro Heiskanen, during the public fall out following Linden’s “Leaving the team” They knew trading Hughes would be a PR disaster and pulled the offer (But they WERE going to do it, and if not for Linden falling on his sword, we would have no Hughes, but a old, broken, and couldn’t-care-less Karlsson crippling the team the way he has destroyed the Sharks.

Rumours from this years draft told of a heated exchange between Aquallini and Gary Bettman, NHL commissioner. Much speculation ensued about what it could have been about.

Clearly, in light of this seasons scandalous pandering to the Canucks by way of man advantages, Aquilli’s tantrum was something along the lines of “IT’S MY TUUUURN!! I WANT PLAAAAAYOFF MOOOOONEY!” Aquallini has run this team into the ground trying to take the easy way out and earn himself playoff gates, with ill advised F.A signings, head scratching trades, and always acting as if the team were one deal away for the mythical “Playoffs”

Well, it seems he may get his wish, just remember, it wasn’t the Canucks who EARNED that spot….it was only a case of the owner crying “It’s MY turn to hold the whip!!!!”

And for the Vancouver Canucks, and their 50 years of shame, the beat….and beating, goes on.