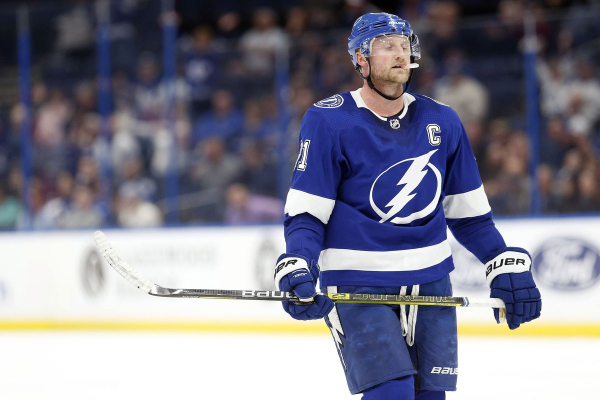 The Dallas Stars had to wait a little bit longer to find out their opponents in the Stanley Cup Final, as the New York Islanders defeated the Tampa Bay Lightning in a double-overtime Game 5 to stay alive in the series. Now the Lightning will once again attempt to close out the series, while the Islanders will fight to push it to a Game 7.

Here is a preview for Thursday’s Game 6 between the Lightning and Islanders. Tampa Bay is the favorite once again, listed at -165 on FanDuel Sportsbook.

Game 1 looked more like a baseball score than hockey, as Tampa Bay poured on eight goals for an 8-2 win. Center Brayden Point and left-wing Yanni Gourde each had two goals, with Point also racking up three assists. Right-wing Nikita Kucherov had a team-high four assists while also scoring a goal of his own.

Game 2 was much more of a fight for New York, but Tampa Bay managed to pull off the 2-1 win. Following goals from Islanders left-wing Matt Martin and Lightning defenseman Victor Hedman, the game remained tied until Kucherov buried the game-winner with nine seconds left in regulation.

Then in Game 3, an early lead and strong finish helped propel New York to a 5-3 win. The Islanders got goals in the first two periods from right-wing Cal Clutterbuck, defenseman Adam Pelech, and left-wing Anthony Beauvillier. Even though Tampa Bay found a way to come back, center Brock Nelson broke the tie and center Jean-Gabriel Pageau iced the game for New York in the waning minutes of the game.

For Game 4, a three-goal stretch within 30 seconds was the story of the game, as the Lightning won 4-1 to put them up three games to one in the series. Following Nelson’s goal to get New York on the board, center Blake Coleman scored 15 seconds later to tie the game. Then left-wing Ondrej Palat scoring 12 seconds after Coleman to put Tampa Bay up for good. Point and left-wing Patrick Maroon also scored for the Bolts later on.

Facing elimination in Game 5, the Islanders battled and pulled out the 2-1 win in double-overtime. New York defenseman Ryan Pulock scored on the power play in the first period, but his goal was answered in the second period by Hedman. A defensive battle then ensued, until right-wing Jordan Eberle finished the two-on-one breakaway with the game-winner.

Tampa Bay will win if their power play makes a resurgence. With a chance to close out the Islanders in Game 5, the Lightning managed just one goal. They had their chances, outshooting New York by 14 and getting three power-play chances, none of which they converted on.

Tampa is now zero for their last six on the power play after generally having success with the extra man during the postseason. Granted, part of Game 5’s failure had to do with the absence of Point, arguably the Lightning’s best player this series. But whether he’s on the ice or not, a healthy power play should close out the Islanders.

New York will win if they build off of Game 5. The Islanders are never going to be a team that overwhelms you with scoring. Instead, they will try to out-work and out-hit their opponents before capitalizing on any mistakes made. That’s what happened in Game 5, where they out-hit Tampa Bay by five, out-blocked them by two, and converted their first power-play chance of the game, a goal that was pivotal to them staying alive in the series.

Also, their penalty kill seems to be finding their footing, evident from the last two games. New York’s tough, disciplined game plan will need to be executed in full force to win Thursday night.

The status of Point should be closely monitored, leading to the puck drop. Both of New York’s victories have come with Point missing the game with an injury, so his availability may need to be known before making any bets.

If he plays, I like the Lightning to win this game quite a bit. I’m less sold on them if Point misses, but I would still likely lean towards the Bolts regardless.