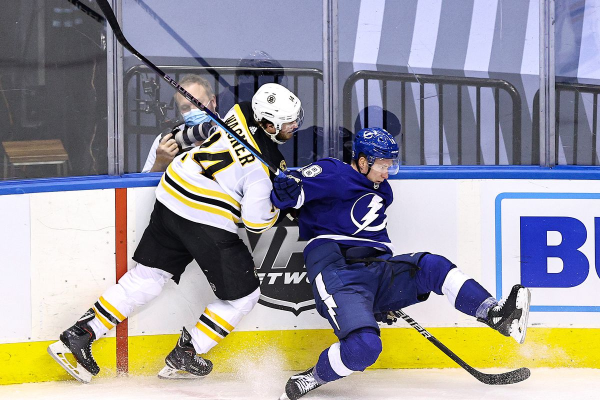 The Tampa Bay Lightning and Boston Bruins are fighting for a spot in the 2020 Eastern Conference Finals. Tampa Bay currently holds a 2-1 series lead heading into game four on Friday night. Boston was able to take the first game of the series, but it’s been all Tampa Bay since then. Game three was an absolute massacre, seeing the Lightning win by a score of 7-1. Boston is going to need a huge bounce-back performance in game four to get back in this series. If not, the Lightning will have a 3-1 lead and a stranglehold on the series.

This series has been one of the weirder ones we’ve seen in these playoffs so far. Games one and two were extremely close, but game three was anything but. The Lightning dominated from the drop of the puck until the final whistle. Was that just one horrible game for the Bruins, or a sign of things to come? Both of these teams are capable of beating the other, but only when they play well. Boston was the better team in game one, both played well in game two, and Tampa was far better in game three. This series has really been all over the place.

Game 1: Game one of this series saw a strong performance by the Bruins right out of the gate. Boston was the better team all night long and skated out to a 3-0 lead. Tampa Bay made a late third-period comeback attempt and was able to cut the lead to 3-2, but that’s as far as they would get. Boston took game one and showed that they could win this series.

Game 2: Game two was a wild, back and forth affair. Both teams played very well and traded goals through the first two periods. The Lightning scored first in the third to take a 3-2 lead, but the Bruins answered late in the period to force overtime. The game went to overtime tied 3-3 and the Lightning came away with a huge win on a goal from Ondrej Palat. This tied the series at one and got the Lightning back on track.

Game 3: Game three of this series was nothing less than a massacre. The Bruins didn’t even bother to show up, and Tampa Bay dominated from the start. The game ended 7-1 in favor of the Lightning but could have been even worse. Tampa clearly took their foot off the gas in the third period and just ran the clock out as best they could. This was a brutal and embarrassing defeat for the Bruins, who now trail in the series. The Lightning, on the other hand, should be full of confidence after dismantling their opponent like that.

Game four of this series is scheduled for Friday, August 28th at 7:30 pm ET. It can be seen in the United States on the USA network. The Boston Bruins are going to need a huge turnaround from game three to avoid going down three games to one. The Lightning will be full of confidence and looking to push the Bruins to the brink of elimination.

At the end of the day, I’m going with the Tampa Bay Lightning in game four. Tampa has all the momentum on their side and all the confidence in the world. They flat out destroyed Boston in game three, and I don’t think the Bruins will be able to bounce back from that. The Bruins looked lost defensively and are not getting good enough goaltending from Jaroslav Halak. Halak looked great in the Carolina series but has struggled against the Lightning, especially the last two games. The Lightning are a team the Bruins struggle against in general, never mind now when they’re not playing at their best. This game and this series now have Tampa Bay written all over it. I fully expect the Lightning to take a 3-1 series lead on Friday.