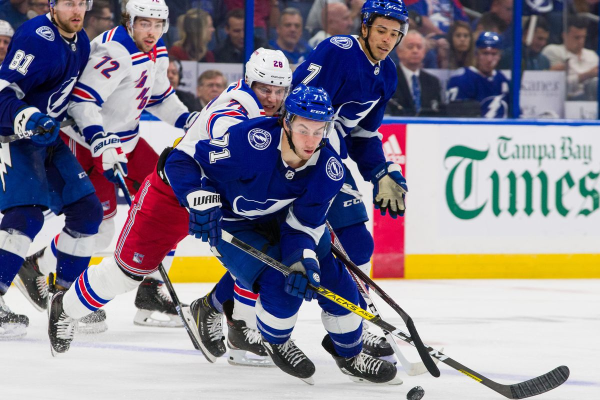 On a full and action-packed night of hockey, one intriguing matchup in shaking down in St. Louis. The Tampa Bay Lightning (9-6-2, sixth in Atlantic) visit the St. Louis Blues (12-4-5, first in Central), with each team hoping to get themselves back into the win column.

Here is a preview for Tuesday night’s game, along with odds and a pick.

Much like last year, the Lightning are having no issues scoring goals. Tampa Bay is averaging 3.71 goals per game, the second-highest in the NHL. They’re also third in shooting percentage and host the league’s second-best power play, which converts 30.2 percent of the time.

But the main reason Tampa Bay currently finds itself outside of the playoff picture is its suspect play on the other end. The Lightning allow 3.47 goals per game, the seventh-most in hockey. They also allow the fourth-most shots at 33.5 and have just the 22nd-ranked penalty kill at 76.7 percent.

The Blues are also following a similar blueprint to last year’s team that won the Stanley Cup. St. Louis has just been average in terms of scoring goals, ranking 17th with 2.95 goals per game. While they don’t get many shots on goal, the Blues have been able to find success with the extra attacker, converting on the power play a fifth-best 25 percent of the time.

But they are still one of the better defensive teams in the sport, ranking ninth with 2.81 goals allowed and 30.2 shots allowed.

We’ll start with St. Louis, which, after seven straight wins, has lost three straight. During their 0-1-2 stretch, the Blues have scored just five goals, as it appears they are starting to feel the loss of Vladimir Tarasenko and Alex Steen to long-term injuries.

The Blues could use their top guys, Brayden Schenn, David Perron, and Ryan O’Reilly, to heat up again starting in this one. Schenn and Perron have just one goal each in their last seven games, while O’Reilly has a lone goal in his last six games.

Tampa Bay is now getting production out of its stars. After being held scoreless in seven of the first 13 games of the season, last year’s Hart Trophy winner Nikita Kucherov is up to two goals and five assists in his last four games.

Steven Stamkos also enters this game with a five-game point streak, as the captain has two goals and six assists in the last five contests for the Lightning. The team is also healthier than it was earlier, overcoming injuries to Brayden Point and Victor Hedman.

Both teams are expected to have their regular starters in net. The Lightning will go with last year’s Vezina Trophy winner, Andrei Vasilevskiy, who is 7-5-0 but carries a disappointing 3.02 GAA and .901 save percentage.

The Blues will counter with second-year goaltender Jordan Binnington, who is 9-3-4 with a solid 2.40 GAA and .919 save percentage.

This is the slimmest spread of any game on the slate Tuesday night, with the Lightning coming in as slight favorites on the road at -120. This game should be incredibly competitive, but I like Tampa Bay just a little bit more. They’re healthier, their stars are playing like stars once again, and I think they will outshoot the Blues and out-chance them throughout the game. Give me the Lightning -120.