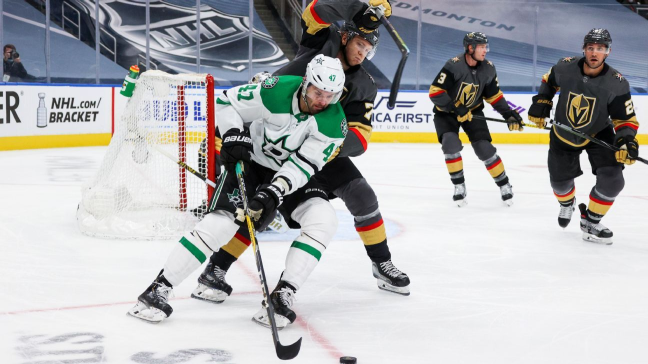 Tied at one game a piece, the Dallas Stars now become the “home team” (though playing in neutral site Edmonton) for the next two games of the Western Conference Final. The Vegas Golden Knights are, however, -170 favorites as the “away” team, and the total is set at over/under 5.5 goals.

The Vegas Golden Knights recently passed four NHL franchises for postseason wins as a franchise (despite being only three years old) picking up their 28th franchise playoff win, topping the Stars 3-0 with a Robin Lehner shutout.

The Golden Knights earned the first seed in the round robin of the West’s top four seeds in the delayed 2020 NHL playoffs. After Vegas picked apart the Chicago Blackhawks in the first round, the squad struggled in the second round, only barely squeaking by underdog Vancouver Canucks in a game seven that was tied 0-0 late in to the third period. The Stars, who also played in the opening round robin and earned the third seed, defeated the disappointing Calgary Flames in their first match (in six games) and then upset the heavily favored Colorado Avalanche after the Avs first two goalies went down with injuries.

The Stars and Knights have split the first two games of this conference final, trading shutout affairs. Stars starting goalie Anton Khudobin stopped all 25 of Vegas’ shots in the opener and Robin Lehner (who sat behind Marc-Andre Fleury in game one) stopped 24 of 24 shots in game two.

John Klingberg has scored the Stars’ only goal of the series thus far, and William Karlsson, Paul Stastny and Thomas Nosek have potted the puck for Vegas.

While questions still remain about after Khudobin failed to finish the second game of the series on the state of the Stars goaltending, it will be their offence that could win them Thursday’s game and the series — specifically captain Jamie Benn. Benn has potted 14 points, including give goals, in 18 playoff games in 2020, and after a career-low 39 points in the regular season, Dallas will need Benn and line-mates Tyler Seguin and Alexander Radulov to assault whoever starts in net for Vegas with shots if the Stars are to complete the upset.

On the other side of the ice is a remarkably large question mark for a team that plowed through a regular season and has made it’s way to within three games of it’s second Stanley Cup Final appearance in the last three years (and their ONLY three years) — goaltending. The Knights should have one of the best goaltending tandems in the league, proven veterans Fluery and Lehner, but when Fluery’s agent posted a picture on social media that depicted Vegas’ head coach stabbing a sword through his clients back the state of the Knight’s goaltending was thrown into question. Before every game it becomes a question for pundits to debate: Who should start? Why? How will the goaltender not starting feel?

Thought Fluery allowed only one goal in game one, Lehner shut out the Stars in game two — his fourth shutout of the postseason — and should likely be the go-to guy for Vegas for the remainder of the playoffs. A large portion of a NHL head coaches job is managing egos, and if the Knights are to win, Peter DeBoer will have to do exactly that.

While Vegas should, and likely will, win this series, the Stars have shown to be able to stay competitive in games all throughout the playoffs against better opponents on paper. If the odds were closer I would be picking the Golden Knights all day, but at +145 underdogs, I’ll take the Stars to get the leg up in this series Thursday. If the Stars do manage to win, I would also take a peak at what Vegas’ odds become to win the series, and Stanley Cup — could be some good value there.

If the first two games of this series are any indication, goals will be hard to come by. How the line is still set at Over/Under 5.5 after back to back shutouts in the series’ opening games is beyond me, and betters should feel almost obliged to take the under for the third game — if the offenses finally break out, so be it.