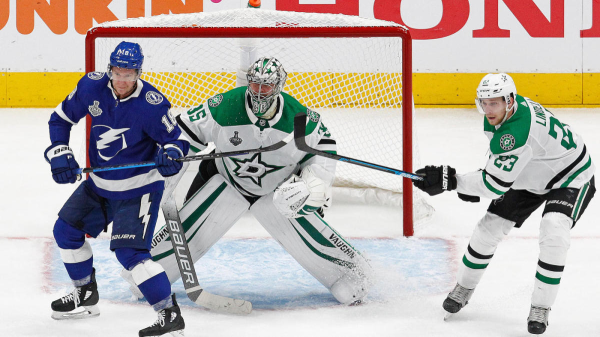 On Friday evening, the Tampa Bay Lightning and the Dallas Stars will face-off again in Game 4 of the Stanley Cup Final, with puck drop set for 8PM E.T. at Rogers Place in Edmonton.

Game 1 was a big victory for the underdog Stars, led by their goalie Anton Khudobin. The veteran Russian shut the door on the Tampa Bay offense in the third period, stopping 22 shots. Despite penalty trouble in the last period, the Stars were able to weather the Lightning storm (pardon the pun) to come out 4-1 victors.

In Game 2, Tampa bounced back with 3 goals in the first period to lead the game 3-0 after 15 minutes. However, the Stars refused to give in as they inched closed on a power play marker in the second. The Stars added another in the third, but it proved to be too little too late as the Lightning levelled up the series 1-1.

It was Tampa who secured the series lead heading into Game 4 after a 5-2 drubbing in Game 3. In the first period, the Stars had themselves to blame after a sloppy pass and turnover saw them down 2-0 in the first period. Steven Stamkos marked his first game back in 210 days with Tampa’s second goal, though he didn’t play more than one shift in the second period before being forced to sit due to injury. A brief Stars rally saw them get one goal back, but the Lightning were not to be denied on this night, making it 5-1 before the end of the second period. A Stars goal in the final period wouldn’t be enough to salvage anything from a game dominated by Tampa Bay.

Who Are the Favorites?

Following a dominant display in Game 3, it’s no surprise that Tampa Bay go into Game 4 as favorites to extend their series lead. Fanduel places the moneylines at Tampa Bay Lightning -157 and Dallas Stars +135 and the pucklines at Lightning -1.5 (+175) and Stars +1.5 (-210).

The Stars will need their goalie at his best in Game 4 as they look to level the series. In their victory in game 1, his influence was crucial in shutting out the Lightning’s star offense. After a rocky Game 3, which saw him pulled from the ice for the third period having conceded 5 goals on 29 shots, expect Khudobin to return for Game 4 well rested and with a point to prove.

With that in mind, Under 5.5 goals offers good value at -145. If the Dallas Stars rectify their defensive errors and Khudobin displays the kind of form we know he is capable of, then expect this to be a tight and low scoring game. The Stars also need to get back in this series, and I think the only way to do that is to turn this into a more grind-it-out style game.

Getting a Quick Start

The first period moneyline at Fanduel is set at +150 for Tampa Bay, and looks to be a good bet.

Hedman to Break a Record?

Lightning defenseman Victor Hedman continued his sensational postseason with his 10th goal of the playoffs. The current record for most goals scored by a blue-liner is 12, held by Paul Coffey during the 1985 playoffs. This may well give Hedman some extra motivation to contribute on the offensive end, and you can get him to score over 0.5 goals at +350 with Fanduel. Those are some big odds for a guy who is on fire.

It’s been a nail-biting series so far and although the Lightning go into Game 4 rightfully as favourites, I wouldn’t count out Dallas just yet. I fully expect Khudobin to return to his best in goal to keep the Lightning’s scoring down and make for a game that goes down to the wire.