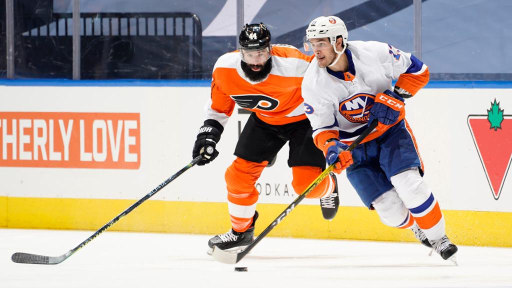 The Philadelphia Flyers and New York Islanders are playing to decide who will represent the Metropolitan Division in the Eastern Conference Finals against the Tampa Bay Lightning. The Islanders currently hold a 3-2 series lead heading into game six on Thursday night. The Flyers were able to keep their season alive with a gutsy overtime win in game five. Overall, this series has been very tight, with three of the five games so far decided by only one goal. On Thursday, the Flyers will once again try to continue their season and force a game seven. The Islanders will be looking to finish off their division rival and advance to the conference finals for the first time since 1993.

This series has been full of close games, and there is no reason to think game six will be any different. Both teams have gotten very solid goaltending and play a tight-checking, defensive style of play. New York’s offense has been a little bit better than Philadelphia’s, and that is the difference in the series at this point. The Islanders hope that offense can finish off the Flyers on Thursday. If not, we will see a game seven this weekend.

Game 1: In game one of this series, the Islanders picked up right where they left off against the Capitals. Semyon Varlamov shut out the Flyers, and the offense came alive in the third period as the Islanders skated away with a 4-0 win.

Game 2: Game two was a response game for the Philadelphia Flyers. They knew they had to get going if they were to have any chance of winning the series. The Flyers offense finally woke up as they were able to score four goals. The game went to overtime tied at three, but Philippe Myers made sure the Flyers would leave with a win. He ripped a shot by Semyon Varlamov, giving the Flyers a 4-3 win and tying the series up at one.

Game 3: Game three saw the Islanders retake control of the series with a hard-fought 3-1 win. They once again played stellar defense and were able to score enough to get the victory. New York controlled the second and third periods, not allowing the Flyers to make any sort of comeback attempt. This gave them a 2-1 series lead.

Game 4: Game four was another tight-checking, defensive game that saw the Islanders hang on for a 3-2 win. The Flyers found themselves down 3-1 late in the third period but made a huge push to try and come back. The Flyers scored once in their comeback attempt, cutting the lead to 3-2, but couldn’t get the second goal they needed. New York hung on for dear life and pushed the Flyers to the brink of elimination.

Game 5: Game five was do-or-die for Philadelphia, and they survived to play another day. The Flyers almost choked the game away, though. They had a 3-1 lead in the third period but allowed the Islanders to tie it up at three and force overtime. Philadelphia didn’t want their season to end, however, and a huge overtime goal from Scott Laughton gave them a 4-3 win. They are still on the brink of elimination but are at least still alive heading into game six.

Game six between the Flyers and Islanders is scheduled for Thursday, September 3rd at 7 pm ET. It can be seen nationally in the United States on NBCSN. The Flyers will be trying to once again keep their season going, while the Islanders will be trying to punch their ticket to the Eastern Conference Finals. Game six should be a very close game. Every game in this series, except for game one, has been decided by one or two goals. I don’t think this game will be any different.

At the end of the day, I think the Islanders finish off the series in six. New York has been phenomenal in these playoffs and has outplayed the Flyers for much of this series. Philadelphia’s lack of scoring is a big concern. They have not gotten nearly enough offense from their top players. The lack of scoring will finally sink the Flyers, and the New York Islanders will be meeting the Tampa Bay Lightning in the conference finals. It will definitely be close. Both teams will play hard, but in the end, I believe game six, and the series will go to the New York Islanders.