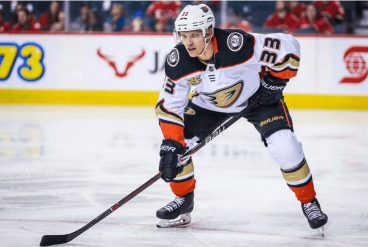 The playoff race is heating up in the National Hockey League. Game recaps, jersey retirements, and more cover some of the latest NHL news and notes.

Up to the Rafters

Jarome Iginla’s No. 12 was retired on Saturday night in front of a sold-out crowd at Scotiabank Saddledome in Calgary. Iginla is the Flames’ all-time leader in goals (525), points (1,095), and games played (1,219). He became the third player to have his number retired by the organization, joining Lanny McDonald and Mike Vernon.

Although the night was dominated by Iginla, it was the Wild who left Calgary the happiest of them all. Devan Dubnyk made 35 saves as the Wild upset the Flames 4-2. Minnesota has won five games in a row and still holds on to the second Wild Card spot, while Calgary’s seven-game winning streak came to an end. Eric Staal, Matt Read, Ryan Suter, and Ryan Donato all scored for the Wild.

Brad Marchand scored the lone goal and Tuukka Rask made 20 saves as the Bruins edged the Devils 1-0. Boston extended their point streak to 16 games (12-0-4) and haven’t lost in regulation since January 19th. They currently hold a three-point lead above the Maple Leafs for second place in the Atlantic Division.

Sidney Crosby’s four-point night was more than enough as the Penguins stormed past the Canadiens 5-1. Crosby had a goal and three assists for his fourth straight multipoint game. The goal was Crosby’s 440th of his career, all with Pittsburgh, moving him past Jaromir Jair as the second-leading goal-scorer in franchise history. Only Mario Lemieux has more (690).

The Lightning tied an NHL record with their 50th win in 66 games on Saturday, defeating the Senators 5-1. Tampa Bay matched the 1995-96 Red Wing as the quickest team to reach 50 wins in a season. The Lightning received nine points from their defensemen and had five different goal-scorers, propelling them to an 11-1-0 record over their last 12 games.

Break Out the Hats

Jamie Ben scored a hat trick as the Stars beat the Blues 4-1 in St. Louis. Been had missed the past two games but returned to earn his fifth career hat trick, his first since April 7th, 2018. Dallas closed the gap on St. Louis for third place in the Central Division, now trailing by just three points. They still lead the Wild by one point as the first Wild Card team in the Western Conference.

The Coyotes won their sixth consecutive game by beating the Red Wings 3-1 on Saturday. This is Arizona’s longest winning streak since winning six in a row from February 16-28, 2012. Oliver Ekman-Larsson and Vinnie Hinostroza each had a goal and an assist, while Darcy Kuemper made 22 saves. Arizona trails the Wild by one point for the last Wild Card spot.

Jakob Silfverberg signed a five-year contract extension with the Ducks on Saturday, reportedly worth a little over $5 million AAV. Silfverberg, 28, was set to become an unrestricted free agent at the end of this season. The forward has 24 points in 56 games this season, leading the Ducks with 16 goals.