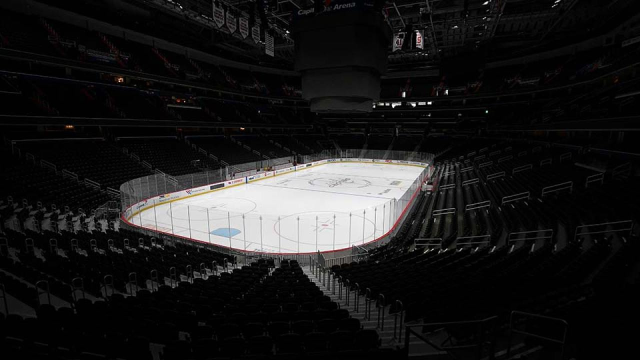 Good news is on the way, though. The NFL will be conducting its highly-anticipated draft this weekend virtually. While the NHL certainly can’t play its games virtually, the league is starting to work on plans to be ready in the event there is enough time to finish out this season.

“Once we feel it’s a safe time to start bringing teams back to practice facilities and bring them back to the ice, we’re going to constantly monitor them and work on getting them back,” said Florida Panthers president Matt Caldwell. “When we start laying, if we resume the season this summer, I think there will be an empty or limited arena format.”

Caldwell even added that the goal is “to finish this season in some way, shape, or form.”

One of the ideas being floated around is that the home arenas for the Carolina Hurricanes, Edmonton Oilers and Minnesota Wild would serve as neutral sites for each division. NHL commissioner Gary Bettman said that there will likely be no fans in the building for these games. The idea here would be to keep players in a close setting and not exposing them to different parts of the country.

“Anything we’re considering doing starts with health and well-being, whether it’s the players or other personnel or fans or the community at large,” said Bettman. “Everybody is going through a tough time. “We’re hopeful that by doing the right things in the short term that we’re able to come back and hopefully complete this season on some basis that is fair and has integrity.”

Bettman has been in talks with NBA commissioner Adam Silver about how they are conducting comeback efforts. Although Bettman said the NHL’s return isn’t tied to the NBA’s, considering the preparation is quite a bit different, as is the number of players and coaching staff for each.

“We don’t want the players playing games that matter until they’re in game shape,” Bettman said. “The fact is that none of our guys have been on skates, and we have to make sure that they’re in game-ready condition.”

There is also the matter of money. If the playoffs are canceled, the NHL could owe its partners “credits against next season,” since the bulk of revenue is from the playoffs. Bettman believes the two sides can make it worthwhile for each of them.

“I don’t want to get into the specific numbers,” said Bettman. “The fact is that we have a system that made the game healthy, that has paid the players more than before the system was in place and has made our game more competitive than it’s ever been. The system works, in good times and in difficult times.”

And then, there is another wild idea being floated around. Bettman said that league has even explored the possibility of holding the annual NHL Draft in June, before the completion of this season has happened.

“It was a trial balloon,” said Bettman. “No decision has been made. But as I said when we were getting feedback, we don’t live in a world of perfect anymore. We’re going to have to make adjustments. Ideally, from our standpoint, would be if we can complete the regular season, even if it’s on a centralized basis, and then go into the playoffs that we normally play.”