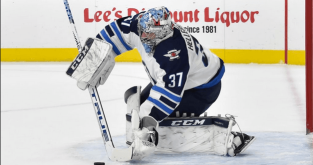 Two playoff teams will duke it out in Raleigh, as the Winnipeg Jets (39-23-4, 2nd Central) face off against the Carolina Hurricanes (36-23-7, 4th Metropolitan).

Both of these teams are sitting in playoff position, but each of them is on opposite ends of the momentum scale. Even though the Jets look like they have their playoff spot all but secured, they are just 4-5-1 over their last 10 games. Meanwhile, the Hurricanes are 8-1-1 in their last 10, with Tuesday’s overtime loss to Boston snapping their five-game winning streak.

Winnipeg won the first and only matchup between these clubs this year by a score of 3-1 on October 14th. This time around, Carolina is the favorite at home, listed at -170.

Jetting to the Playoffs

Only a handful of teams out west have been in playoff position for essentially the entire season. One of those teams is the Jets, who at 82 points trail the Predators by one point for the Central Division lead. However, Winnipeg has sputtered as of late, losing three of their last five and six of their last nine.

The Jets are among the strongest offensive teams in the league, ranking seventh in goals, sixth in shooting percentage, and fourth in power play percentage. They have one clear weakness, where defensively they rank third-to-last in shots allowed. However, they’re still 14th in goals allowed.

Laurent Brossoit, who has been a revelation in light of Connor Hellebuyck’s struggles, will start tonight for the Jets. Brossoit is 11-5-2 with a 2.53 goals-against average and .927 save percentage.

Arguably no team has had more fun this year than the Hurricanes. Known for their colorful and creative postgame celebrations, Carolina has reason to celebrate as of late. The Canes have points in 23 of their last 29 games and have gone 8-1-1 over their last 10 to move into the first Wild Card spot at 79 points.

Based on the possession stats that usually indicate success, it was a matter of time before Carolina rose up the standings. They rank first in shots and first in shots allowed, as well as sixth in goals allowed. But they are an average 13th in goals scored despite shooting the most shots, thanks to a poor 26th ranking in shooting percentage.

Forward Sebastian Aho leads the group with 75 points, followed by Teuvo Teravainen (61). Even though the shots are coming, the point-scoring hasn’t been there past those two, as just Justin Williams (43) and Micheal Ferland (35) are the only others over the 30-point mark.

In what has largely been an equal partnership in net between Petr Mrazek and Curtis McElhinney, Mrazek is expected to start tonight. The veteran is 16-12-3 with a 2.60 GAA and .904 save percentage, with three shutouts.

Winnipeg is a dangerous team overall, but coming in without a lot of momentum and an average road record (17-15-0). Meanwhile, the Hurricanes are translating their shot advantages into wins, and have the hot play heading into tonight. I’ll take the Hurricanes to win -170.