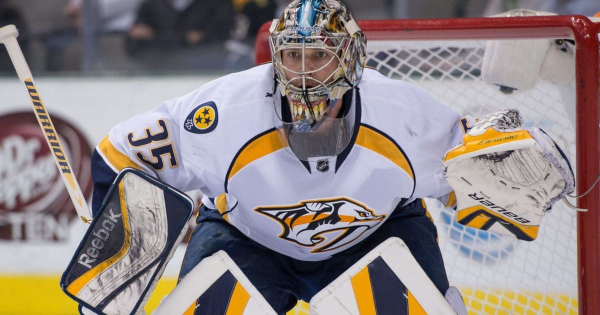 Two Western Conference teams look to end their skids on Tuesday night in Canada. The Vancouver Canucks (9-6-3, fourth in Pacific) will attempt the snap their four-game losing streak when they play against the Nashville Predators (9-5-3, third in Central), a team that has lost two in a row.

As a result of their losing streaks, both teams have lost their holds of first place over the last few games in their respective divisions. Here is a preview for Tuesday night’s showdown in British Columbia, along with odds and a pick.

We’ll start with the Predators, a team that is still scoring goals at a rapid pace. Nashville is second in goals scored with 3.82 per game on a strong 11.9 shooting percentage. There’s a little bit of luck involved, as they’re also 13th in shots with 32.1 per game.

Normally, the Predators are elite defensively, but they have been fairly average this year. They rank just 19th with 3.06 goals allowed per game and have the 22nd-ranked penalty kill in hockey. They do, however, allow the sixth-fewest shots on goal at 29.9.

As for the Canucks, their offense has cooled off considerably from earlier this season, now ranking 14th with 3.11 goals per game. But they still rank in the top-10 in shots on goal (34) and power-play percentage (21.6 percent).

Fortunately, their defense has taken a huge step forward this season, and now allows the sixth-fewest goals in hockey with 2.56 per game. Vancouver is also 10th in shots allowed and penalty-kill percentage, rounding off a unit that has become one of the strongest in the league.

As mentioned earlier, the Canucks offense started the season very well. Earlier this season, they scored five or more goals seven times. However, in their four-game losing streak, the Canucks have scored just five total goals.

Vancouver is led by 20-year-old star Elias Pettersson (six goals, 15 assists), who leads the team in scoring with 21 points. Pettersson, along with J.T. Miller (19 points) and Brock Boeser (18 points), are the ones who need to lead the charge and get the offense going again against a good Predators team.

And speaking of the Predators, their once-proud defense was recently gashed for nine goals by the Avalanche last week. They have a trio of really good defensemen in Roman Josi (17 points), Ryan Ellis (16 points), and Mattias Ekholm (nine points), but experience a fairly steep drop-off after them.

This exposes Nashville against a deep team like the Avs, and also may potentially expose them to a Canucks team that has some depth. Rather than the bottom defensemen stepping up, the more likely solution is Josi and company elevating their games even more and shutting down Vancouver’s top options.

This game is considered as close of a “pick ’em” as you’ll see on the schedule, with the Canucks the slight favorite at -110. Vancouver plays well at home, evident by a 4-1-2 record at Rogers Arena, while Nashville is just 3-3-1 on the road. By the slimmest of margins, I like the Predators in this game.

Both teams are slumping, but the Predators are closer to bouncing back and have more overall talent they are bringing onto the ice. Give me the Predators +110 to steal this game on the road.