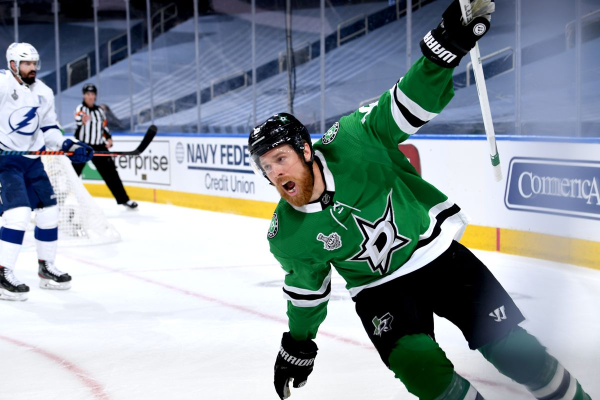 Everything has gone according to plan for the Tampa Bay Lightning so far this season. They were among the best regular season teams, successfully navigated the Toronto bubble, and now the Edmonton bubble has gone smoothly as well. Only one thing has gotten in the way.

The Dallas Stars aren’t playing along. A thrilling, double overtime win for the Stars in game 5 has this series still very much alive, and may have the Lightning starting to look over their collective shoulders. Game 6 takes place Monday night, with the Stars looking to force game 7 and the Lightning looking to wrap up what they feel is rightfully theirs.

The guess here is that the Lightning have known for some time that superstar Steven Stamkos was not going to play in the postseason. He got in there briefly for game 3 and made an impact, but as soon as he was pulled, the thought had to be clear throughout the organization that they were not going to have his services again. They decided to make that public over the weekend. Coach Jon Cooper made an official announcement Sunday. This was a clear rallying cry to the players and an acknowledgment to the fans. Cooper knew Stamkos wouldn’t play, but wanted to take the opportunity to make it public so the guys could play FOR him. I expect that emotion to have an impact in game 6.

You have to go all the way back to March 8th and 10th to find the last time the Lightning lost back to back games. Now, this is misleading, of course. Those were actually the last two games of the pre-Covid regular season. Just before those losses, the Lightning had uncorked two huge winning streaks of 10 and 11 games respectively. They were dominant down the stretch, and it’s been no different inside the bubbles. Tampa Bay has not lost two in a row throughout the entire playoffs. They’re almost always a good bet to win, and Monday’s game is no different. That said, be careful on the puck line as they’ve been playing a lot of close games in these playoffs. Of their 17 postseason wins, 12 of them have come by just one goal and 7 of them have gone to overtime.

This is piggybacking on what I just wrote above, as I love the OVER 5 goals in this game. There won’t be any fans in the building, but there will be energy, so I expect goals. It takes more than energy, of course, and we have the data to back that as well. The goalies in this series, Anton Khudobin for the Stars and Andrei Vasilevskiy for Tampa Bay, have been good, but not dominant. Neither team has won a shutout game during their entire postseason run. And Tampa Bay hasn’t even so much as played in a game where either side put up a zero. There will be goals.

Dallas has the Lightning’s attention. That may be enough for the Lightning to wrap it up. They’re the better team, and it’s time for the cream to rise to the top. Plug your nose and pay the dough to play the money line rather than the puck line. I just don’t trust Vasilevskiy to keep Dallas out of the net enough to give the -1 in this case. As for the over, it’s my favorite play here. It’s taken at least 3 goals to win each game so far in this series and I don’t expect that to change. Dallas has had trouble killing penalties, so they focused on playing clean in game 5. It worked, but it’s a tall order to do it again as the stakes continue to rise.