Islanders are set as slight favorites over Flyers in Game 3 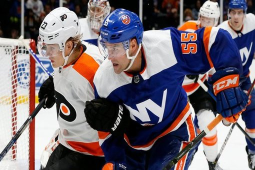 Game 3 between the Philadelphia Flyers and the New York Islanders is set to take place at 7pm et on August 27th. FanDuel Sportsbook has the Islanders as a slight -120 favorite with the Flyers set at EVEN money. The total for the game is set at 5.5 with the OVER coming in at +155 and the UNDER at -180.

Who will get the leg up

A mere 24 hours after the Flyers defeated the Islanders in overtime of game 2, they’ll be facing off again in a battle to determine who will take the 2-1 series lead and a leg up in the Eastern Conference semi-final series.

Despite the odds on the UNDER being set at -180, it should be worth a look as it’s been cashing for both teams at a high rate. The UNDER is 10-4 in Philadelphia’s last 14 games and 3-1-1 in the Islanders last 5 games. Both teams play a defensive style of hockey and they’ve both had solid goaltending from their netminders. When looking at this season’s playoff statistics, the Islanders are 1st in Save Percentage while the Flyers are 5th. The OVER may be temping after a total of 7 goals were scored in game 2, but the stellar goaltending play and the defensive styles of both clubs make me lean more towards the UNDER.

The moneyline odds for game 3 are extremely close, and for good reason. When looking at the advanced statistics of the series through the first two games, it’s hard to find an advantage for either team. They rank 4th and 5th in CORSI%, and the Islanders only have a two-shot advantage in 5 on 5 shots. One statistic that does stand out to me is high danger scoring chances. Through the first two games, the Islanders have had 24 high danger scoring chances while the Flyers have only had 16. The Islanders have also had slightly better goaltending play when it’s 5 on 5 as they boast a save% of 92.73% compared to the Flyers who have a save% of 91.23%.

Both teams have had solid special teams play, but it’s the Islanders who boast the only powerplay goal of the series. The Flyers are 0/3 on the powerplay, only managing to record 3 shots in 6 minutes of powerplay ice time.

In their regular season series, the Islanders won all three games against the Flyers. Beating them by a combined score of 14-9.

My official pick for the Islanders vs Flyers game 3 will be the Islanders moneyline at -120. Despite being the slight favorite in this game, I feel they have the better value when you compare their statistics so far this series. The biggest factor in why I’m on the Islanders is their discrepancy in 5 on 5 high danger scoring chances. New York has also been more effective on the powerplay so far this series, something that they struggled with in their opening round series against the Capitals. Furthermore, the Islanders have had the better defensive and goaltending play so far in the playoffs which we all know is important in crunch time.

The Flyers almost blew the 3-0 lead against the Islanders in game 2, as New York came back to force overtime but they ultimately fell short. If the Islanders can avoid going down early in the game, I think they have shown that they can score goals when they need to and grind out a win.