Injuries Piling Up for the Colorado Avalanche 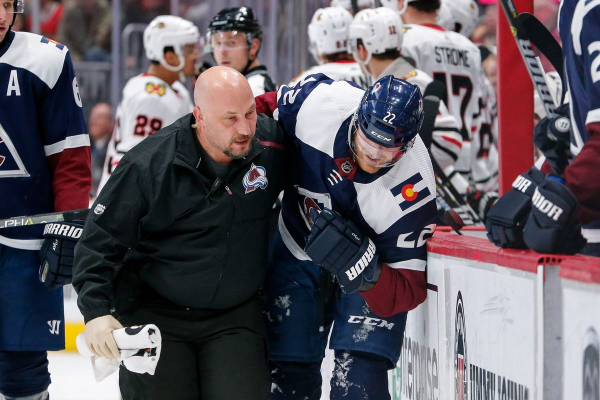 The Colorado Avalanche find themselves in a two games to none hole in their second round series against the Dallas Stars. To make matters worse, they are also dealing with injuries to some very important players. Blaming losses on injuries will always be looked at as a cop out, but there is no doubt that those injuries are having a huge effect on this series. Starting goaltender Philipp Grubauer, defenseman Erik Johnson, and forward Matt Calvert are all currently injured for Colorado, and their absences are certainly being felt.

Starting goaltender Philipp Grubauer went down with an injury in the second period of game one against the Stars. Details on the injury have not been released, but it looked very serious when it happened. He is considered “out indefinitely”. Grubauer had been playing spectacularly in the playoffs for Colorado. Before his injury, he had posted a 5-0-1 record with a .922 save percentage and 1.87 goals against average. With Grubauer out, the Avalanche now turn to Pavel Francouz, who in four games this postseason, has a 1-3 record with a .915 save percentage and 2.31 goals against average. Francouz is a decent goalie, but Grubauer was playing much better at the time of his injury. This is a huge loss for the Avalanche who are already in a deep hole against Dallas.

Veteran defenseman Erik Johnson was also injured in game one against Dallas. While details have not been released on the injury, he is also considered “out indefinitely” by the team. Johnson is an alternate captain and the longest tenured player on the Avalanche. He is a solid top-four defenseman and a leader in the locker room. Prior to his injury, Johnson had two assists, a plus-3 rating, and was playing over 18 minutes a game for Colorado. He is an important piece to the puzzle on the back end, and his absence is certainly hurting the team.

Depth forward Matt Calvert has not yet played in round two after being injured in Colorado’s first round series against Arizona. Calvert is considered “day to day” but has not been able to return to game action yet. Calvert generally plays on the fourth line for the Avalanche, but don’t let that fool you. He is a very important player for the team. Calvert is a high effort, high energy type player who sparks the team with physicality and hard work. He is never shy about throwing hits, blocking shots, and doing all the little things it takes to win. He can also chip in offensively as well. Calvert would have been a godsend for Colorado in game two against the Stars where they were outhit 60-29 in the game. Calvert would have been a physical answer for Colorado, but unfortunately he was not able to play. Calvert’s absence is certainly hurting the Avalanche’s depth. They need him back as soon as possible.

All of these injuries have really hurt Colorado’s chances against the Stars. Dallas has outplayed Colorado in every facet of the game so far, and the Avalanche now have a deep hole to try and climb out of. It’s going to be very hard to climb out of that hole without Grubauer in goal, Johnson on the back end, or Calvert in the lineup up front. The Dallas Stars have been playing on another level all series long, and the Avalanche have not been able to match it. From a betting standpoint, the smart play here is to hammer Dallas the rest of the series. The Stars have the Avalanche on the ropes and will be looking for the knockout punch. Injuries have really weakened Colorado, and right now, it doesn’t look like they have an answer to the Stars.