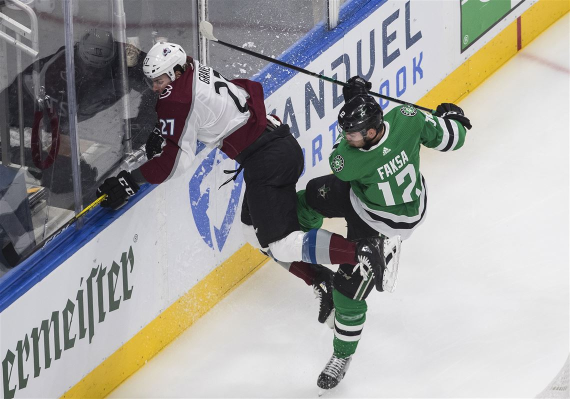 The Dallas Stars and Colorado Avalanche will take part in a decisive Game 7 on Friday with the winner moving on to the Western Conference Final.

Both teams reached this point of the Western Conference Semifinals last season as well. The Avalanche lost to the San Jose Sharks by the score of 3-2 and the Stars fell to the eventual Stanley Cup champion St. Louis Blues in overtime. Neither team has qualified for the conference finals within the past decade.

Dallas comes in as the underdogs with a +115 on the moneyline while Colorado, the home team for the contest, is at -135. The over/under on total goals is set at 5.5—a mark the teams didn’t reach for the first time this series in Game 6.

The Stars held a 3-1 series lead over the Avalanche after Game 4, but Colorado responded with two convincing wins in Game 5 and Game 6 to force a seventh matchup.

The Avalanche have mounted this comeback without the use of either of their typical goaltenders. Both Philipp Grubauer and Pavel Francouz suffered injuries in this series, leaving Michael Hutchinson—a veteran netminder with no playoff experience prior to 2020—to start in goal for the past two games.

Hutchinson has come up big for his team by putting up a .935 save percentage and allowing just four goals combined in both contests. On Wednesday, he became the first netminder for either team to give up fewer than two goals in a game.

The lone goal-scorer for Dallas in Game 6 was Miro Heiskanen, giving him a team-leading 19 points in the postseason. The tally came on a weak shot that snuck by Hutchinson to give the Stars a 1-0 lead. Colorado would go on to score four unanswered goals on their way to a 4-1 victory.

By winning that game and tying the series at three a piece, the Avalanche forced the first Game 7 of the 2020 Stanley Cup Playoffs.

For the Dallas Stars, the key to winning the series comes down to one name: Tyler Seguin.

Seguin has been invisible the past three games, failing to get on the score sheet and earning a minus-four rating in that span. Over the entire postseason, he ranks eighth on the team in points and has just two goals, fewer than Radek Faksa and Jamie Oleksiak.

Dallas desperately needs their top forward to find his game if they want a chance at moving on to the next round. Seguin is performing well below his pace from last postseason, and it’s helped Colorado claw back into this series.

The Avalanche, on the other hand, need to build off their momentum and continue to play their high-offense style. Colorado has had success penetrating the Stars’ defensive structure, and if they can do so again in Game 7, they’ll have an easy time defeating their opponents and advancing to the Western Conference Final for the first time since 2001.

Give me the Colorado Avalanche on Friday.

Colorado’s offense has looked unstoppable this entire postseason. The team has five players scoring at over a point-per-game pace, including Nathan MacKinnon—who has registered a point in every single game of these playoffs. While Dallas has been able to break through at times, the Avalanche have proved they can outscore any problems they might have on the defensive side of the puck.

They also have the advantage of last change in this winner-take-all Game 7, which means Colorado can get their top scorers away from the Stars’ top defensemen.

The Avalanche have come all the way back from a 3-1 series deficit, and they have the talent on their roster to complete the comeback. And, with the way everything has gone over the past two weeks, I think they’ll do it.