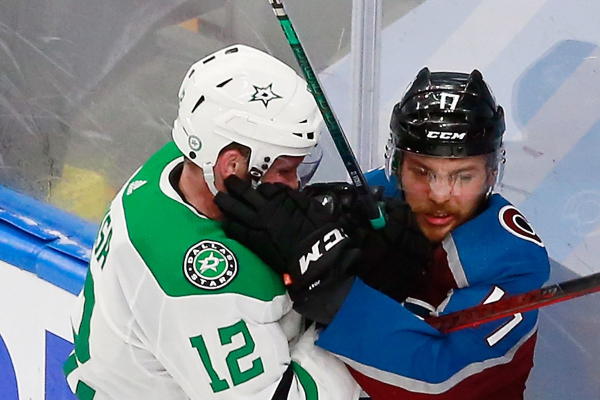 With the Dallas Stars one win away from a trip to the Western Conference Finals, the Colorado Avalanche used a huge five-goal first period to stay alive and send the series to a sixth game. That Game 6 will happen Wednesday in Edmonton, continuing one of the highest-scoring playoff series in recent memory.

Here is a preview for Wednesday’s showdown between the Stars and Avalanche, as well as a series recap and a free pick. Oddsmakers have pegged Colorado at -125 favorites to send the series to a Game 7.

The goals have continued to fly in this series, as Colorado and Dallas have combined for 43 goals in five games. Starting in Game 1, right-wing Alexander Radulov scored twice, including the game-winner, to lift the Stars to a 5-3 and an early series lead. Left-wing and captain Jamie Benn distributed three assists as well.

Dallas kept the momentum going in Game 2, backed by a strong effort from goaltender Anton Khudobin. Khudobin’s 38 saves stood out in the 5-2 win to put the Stars up by a pair of games. Radulov was a standout once again with another goal and assist, as the Stars scored five unanswered, four of which coming in the second period. Right-wing Joe Pavelski and center Radek Faksa were among those who scored for Dallas.

Facing a crippling 0-3 deficit in the series, the Avalanche got back in the series with a 6-4 victory. Down by a goal with less than 10 minutes to go in the game, Colorado answered with three straight goals to bury Dallas. Right-wing Mikko Rantanen and left-wing Gabriel Landeskog each found the scoresheet, as did center Nazem Kadri, who scored the eventual game-winner late into the third.

For Game 4, the Stars rebounded to win 5-4, putting themselves on the brink of advancing. Dallas was aided by a three-goal opening period, with Faksa and Benn each scoring on the power play. Right-wing Denis Gurianov also chipped in a goal, his team-leading eighth of the playoffs. The Stars managed to secure the win despite two late goals from Colorado in the final frame.

To stay alive, Colorado needed a fast start, and they certainly got it. The Avs poured on five goals in the first 20 minutes of play to spur a 6-3 win. Rantanen and Kadri each scored, as did the talented center Nathan MacKinnon.

Left-wing Andre Burakovsky would also score a pair of goals, his second straight multi-point effort. Despite facing a nearly impossible chance of winning after the first period, Dallas did manage to secure a pair of power-play goals courtesy of Benn and defenseman Miro Heiskanen.

Colorado will win if the goaltending shows up. Throughout the series, the Avs have been the superior five-on-five team, outscoring the Stars 20-17 while allowing 1.58 expected goals per game. But obviously, the big problem has been in net, where Colorado has used three different goaltenders this series.

Philipp Grubauer got injured in Game 1 of the series, while backup Pavel Francouz struggled in his three starts before getting injured. The Avalanche will now be counting on Michael Hutchinson, who had a solid Game 5 to be serviceable enough to keep them in the game.

Dallas will win if they have special teams success. Despite getting outscored at even strength, the Stars have won a couple of games this series thanks to a power play that won’t cool off. In their victories in Games 2 and 4, the Stars were 2-for-3 and 3-6, while even going 2-6 on Monday in their Game 5 loss.

That now puts the power play at a 26% success rate this postseason, a five-point increase from their mark in the regular season. Their penalty kill has also been fairly solid, with an above-80% success rate capped off by holding the Avs scoreless in six attempts last game.

This series has been all sorts of fun, but I’m thinking it ends on Wednesday. Overall, the Stars have been the better team this series, and regardless of whether they start Khudobin or Ben Bishop in net, they’ll have an advantage over Hutchinson.

I’m banking on Dallas’ special teams to come through once again, shaking off a disappointing Game 5 and advancing to the Western Conference Finals.