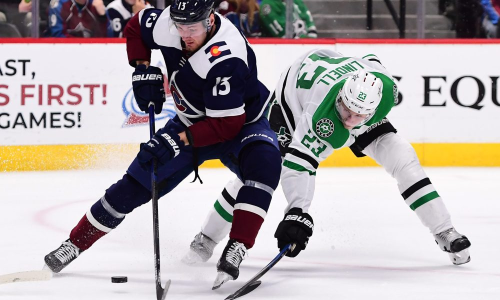 Despite a 2-1 series lead, the “home team” (though playing in neutral site Edmonton) Dallas Stars are slight +115 underdogs in their game four tilt against the Colorado Avalanche (-135 favorites). The total for the Friday’s contest, starting at 10 p.m. EST, is set at 5.5.

After dropping the first two games of their conference semifinal, the Avalanche clawed back into the series with a 6-4 win over the Stars Wednesday night. Dallas took game one 5-3 after a three goal first period, but the loss was even greater for the Avalanche as starting goalie Phillip Grubauer — who had a .922 playoff save percentage at the time — left the game and is now out indefinitely. Turning to backup Pavel Francouz in game two, the Stars offense once again exploded, and a four-goal second period lifted them to a 5-2 victory. In game three however, the Avalanche attacked flashed what they had done all season, and in their first round deconstruction of the Arizona Coyotes — relentlessly out-scoring teams regardless of how many goals were needed.

The Colorado starting job has been Phillip Grubauer’s to lose since he was acquired by the Avs before the 2018-19 season, and while he has posted starting-calibre numbers, the German’s tenure in net has been marred by injury. When Grubauer left the conference semifinal’s opening game with an apparent muscle pull, Colorado was once again forced to turn to a backup — this time Francouz. In his first full season in the NHL, Francouz posted a .923 save percentage across 34 games and a 21-7-4 record. And while Francouz posted a 27-save shutout over the Stars in the bubble round-robin, he started the Avs only loss to the Coyotes in the first round and let in eight goals in two starts since Grubauer’s injury. The Avalanche can win in spite of bad goaltending, but a return to Francouz’s regular season form would squash any doubts for Avs fans and betters.

On the other side of the ice is a Stars winger hoping to forget the regular season and stay hot during the playoffs — Jamie Benn. Dallas’ captain has tallied six points in the first three games of the Western Conference Semifinal and owns 10 points through 12 playoff games. After a career-low 39 points in the regular season, Dallas will need Benn and line-mates Tyler Seguin and Alexander Radulov to pepper Francouz with shots if the Stars are to complete the upset Friday night.

At -135, there is too much value to turn down the moneyline Avs. Heading into the 2020 playoffs, the Avalanche were co-favorites alongside the Tampa Bay Lightning to hoist Lord Stanley’s Cup and there is no reason to doubt them because of a few shaky goaltending performances. Though Francouz will determine just how far they go, betting against the Avs (at least until they are dominant favorites once again) wouldn’t be wise.

As well, considering there hasn’t been a one-goal game in the Stars-Avs series yet and Colorado hasn’t played in a one-goal affair in two weeks, betters can also confidently bet the Avalanche -1.5 at +210.