Can the Islanders Bounce Back Against the Lightning in Game 2? 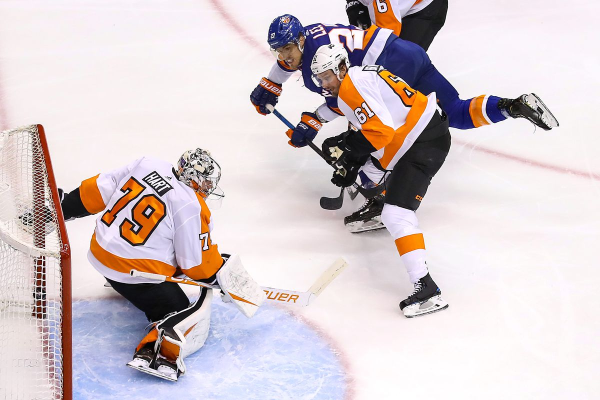 Game 2 of the Eastern Conference Finals goes down on Wednesday night as the Islanders try to even up the series against the Lightning. After getting demolished 8-2 by the Lightning in game 1, the Islanders are coming back as +145 underdogs in game 2. It’s important to note that this is only a 5-cent movement in odds as they closed at +140 right before puck drop of game 1.

While being one of the better defensive teams throughout the NHL playoffs, New York could not hold it together against Tampa Bay in game 1. They allowed a total of 9 high danger scoring chances during 5 on 5 play, while only recording 6 themselves. 3 of the Lightning’s 8 goals in the game came from these high danger scoring opportunities, so the Islanders will have to find a way to tighten it up in their own end if they want to have success this series.

The other key statistic that you have to look at when handicapping an NHL game is CORSI%, which gives you an overall look at all types of shots recorded by each team, including missed and blocked attempts. The Lightning dominated the Islanders in 5 on 5 CORSI% in game 1, recording at a rate of 53.85% compared to the Islanders 46.15%. The Islanders normally get away with a low CORSI% because of their defensive style of play, but they weren’t able to limit the high danger scoring opportunities like they normally do.

The Lightning also dominated the Islanders on special teams. They were on the powerplay for only 7 minutes and 7 seconds but managed to record 12 shots and 3 goals in that time. This is a similar struggle the Isles had against the Capitals in round 1 of the playoffs as Washington was able to dominate with their powerplay, scoring 50% of their goals in that series while having a man advantage.

The Islanders had much more time on the powerplay in game 1 against the Lightning (10:44), but only managed 10 shots and 0 goals. Special teams will have to be a big area of focus for New York moving forward if they want to slow down the potent Lightning offense.

One thing that you will have to keep an eye on before placing your bet is who the starting goalie will be for the Islanders. Thomas Greiss got the start in game 1, but was pulled after allowing 3 goals on 9 shots. Semyon Varlamov didn’t do much better as he allowed 5 goals on 25 shots after replacing Greiss. Head coach Barry Trotz has yet to confirm who will be in net for game 2. Greiss has a goals against average (GAA) of 2.02 and a save percentage (SV%) of .929 so far in the 2020 playoffs, while Varlamov has a GAA of 2.22 and a SV% of .913.

My pick for this game is the OVER 5.5 at +110. While I think the Islanders are better than the game 1 score would indicate, I would have liked to see a better number on them in game 2 after getting dominated in game 1, so I’m going with a bet on the total instead.

Due to their defensive style of play, the total is usually set at a low mark in Islanders games and that’s what we’re seeing here. I don’t think the Islanders will be able to fully shut down the Lightning’s high powered offense this series, so I think their only hope might be to try outscore them. We may see Barry Trotz change his game plan to a more offensive one in game 2, as the Lightning were able to play at a pace that the Islanders really struggled to contain in game 1. If they move to an offensive style of play, we could see a goal fest so I love the plus-money at OVER 5.5.

Another point that makes the OVER intriguing is the Islanders goaltending situation. After both goalies got the net filled on them in game 1, confidence has to be at an all time low for whoever gets the nod in game 2. There’s too many signs that point to the OVER to pass up the plus-money play.