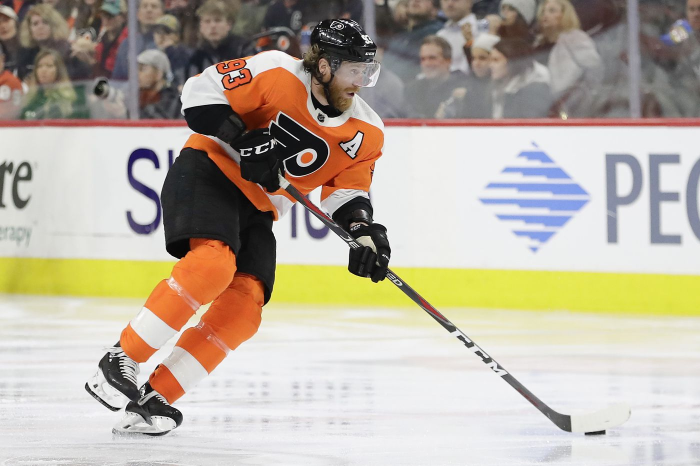 Two of the East’s hottest teams will face off tonight in the City of Brotherly Love, as the Philadelphia Flyers (41-20-7) will host the Boston Bruins (43-14-12). This will be the first time these teams have played each other in almost two months after the Flyers won a thrilling 6-5 contest in Philadelphia.

Here is a preview for tonight’s matchup, along with odds and a free pick.

Although the Bruins fell 5-3 at home on Saturday to the Lightning, they have still won seven of their last 10 games overall. That run helped catapult them to 98 points on the season, the highest point total in the league.

This season, Boston is eighth in goals per game with 3.26, while also ranking just inside the top 10 with 32.1 shots on goal. They also boast an offense that has the 11th-ranked shooting percentage of 10.1, as well as the league’s second-best power-play percentage, coming in at 25.1 percent.

Defensively, no team is allowing fewer goals than Boston’s 2.42. The Bruins also sit eighth with 30 shots allowed per game and carry an 84 percent penalty-kill rate, the third-best in the NHL.

Meanwhile, after Saturday’s 3-1 win over the Sabres, the Flyers enter tonight as winners of nine in a row. The streak launched them into second place in the Metro, and at 89 points trail the Capitals by one point with a game in hand.

On the year, Philadelphia is fifth with 3.34 goals per game. They make up for their 17th-ranked 31.3 shots on goal with a 10.7 shooting percentage, which ranks fifth. They also rank 13th with a power-play percentage of 21.

For defense, the Flyers are 17th with 2.78 goals allowed but give up the fewest shots per game with 28.7. Their penalty kill also just cracks the top 10, stifling opponents 82.1 percent of the time.

Boston has a dynamic duo of David Pastrnak and Brad Marchand that will put pressure on Philadelphia tonight. Pastrnak scored a power-play goal on Saturday, his 48th score of the season, and now sits in a tie with Alex Ovechkin as the league leader.

He is currently on a five-game, six-point streak heading into tonight’s contest as one of the league’s top offensive threats.

As for Marchand, the pesky winger extended his point streak to 12 games, scoring five goals and netting 12 assists during the run. With 28 goals and 58 assists of his own, he is as dangerous as anyone in hockey as well.

Not to be outdone, but Philadelphia has found themselves led by Claude Giroux and Jakub Voracek over their win streak. The captain Giroux is coming off of a two-goal game, extending his point streak to three games.

With two multiple-goal games over the last five appearances for the center, he is up to 21 goals to go along with 32 assists.

Voracek hasn’t been the goal-scorer, but he certainly has had a hand in his teammates finding the back of the net. The winger has 10 assists over his current five-game point streak, giving him 44 helpers on the season. He will be looking to keep it going tonight.

In this heavyweight fight, I believe defense and goaltending will be the key. The Bruins are the overall better defensive team with a great goaltender in Rask but will be without Torrey Krug tonight.

Meanwhile, the Flyers do a great job of limiting chances, and Hart has been close to unbeatable at home. I’m going with the Flyers -110 to make it 10 wins in a row tonight.