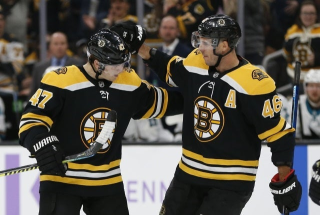 Two of the NHL’s “Original 6” franchises will battle tonight in the Windy City, as the Boston Bruins (32-10-12) are set to face off against the Chicago Blackhawks. The Bruins currently have a hold on first place in the Atlantic Division, while the Blackhawks are fifth in the Central.

Here is a preview for tonight’s matchup, along with odds and a free pick.

We’ll start with the Bruins, who enter tonight’s game in the midst of a four-game winning streak. Boston currently ranks sixth in the NHL with 3.35 goals per game. Averaging a solid 31.7 shots, Boston has the league’s eighth-best shooting percentage at 10.6, and also carries a 26.8 power play percentage, the second-highest in the league.

There is no team who allows fewer goals on average than the Bruins. Their 2.41 goals allowed per game in the lowest in hockey, giving up only 30.7 shots as well. The penalty kill is also elite, as their 84.5 penalty kill percentage ranks third in the sport.

Now onto the Blackhawks, who opened up the second half with a shootout win against Arizona and an overtime loss yesterday versus the Wild. Chicago is 18th with 2.96 goals per game, doing so on 31.2 shots on average. Along with a 9.5 shooting percentage, the Hawks power play is among the league’s worst at 15 percent success, ranking third-to-last.

Chicago’s defense and goaltending have helped them allow 3.06 goals per game, 15th in the NHL, despite allowing a league-high 35.3 shots per game. But the penalty kill for the Blackhawks has been very effective, as their 82.7 percent kill rate ranks a strong seventh in the league.

Boston’s leading scorer is among those in the conversation for all the major hardware during award season. DavidPastrnak has enjoyed a career year thus far, scoring 38 goals and dishing out 37 assists. His 75 points put him in contention for the league lead, as do his 38 goals, and he has been consistent all season. He is the most dangerous player on the ice for either team tonight.

However, he’s not the only Bruin to watch closely tonight. Brad Marchand and Torey Krug are each having All-Star caliber seasons and have been hot as of late. We’ll start with Marchand, who snapped a seven-game goal drought with scores in the last two games. The veteran winger is now up to 23 goals and 46 assists. Meanwhile, Krug had a monster two-goal, two-assist day against the Wild on Saturday, giving him 30 assists to go along with seven goals.

Although the Blackhawks aren’t the dominant Cup-contender they were last decade, PatrickKane is still one of the best players in hockey. Before being held without a point yesterday, Kane was riding a 12-game point streak in which he had five goals and 13 helpers during that span. Kane is now up to 25 and 40 assists in 53 games, as he tries to secure his second straight 100-point season.

Along with Kane, a couple other players on the Hawks have gained some momentum. Rookie Kirby Dach, last June’s third overall pick in the draft, is working on a four-game point streak in which he has a goal and four assists. The youngster is now up to seven goals and nine assists overall. Elsewhere, defenseman Erik Gustafsson has found his offensive touch once again, scoring a goal and dishing out six assists over the last five games. The Swede now has six goals and 19 assists in 52 games.

For Boston tonight, expect to see the veteran Jaroslav Halak guard the net. Halak is 13-6-6 with a solid 2.42 GAA and .920 save percentage.

Meanwhile for Chicago, you’ll likely have Robin Lehner getting the start. Lehner is 15-8-4 and comes in with a 2.86 GAA and .922 save percentage.

As the better team who comes in with serious momentum, the Bruins are big favorites on the road tonight at -170. They have been a solid team away from Boston this season, going 14-8-3, while the Hawks are 12-22-3 at the United Center.

Tonight, the difference-maker will be Boston’s defense. No team is allowing fewer goals in hockey than the Bruins, and the Blackhawks’ offense has struggled with just two goals in each of the last two games. I expect Halak and the blue line in front of him to shut down Chicago tonight, allowing Pastrnak and Marchand to do what they do best on the other end.

So all that being said, give me the Bruins -170 to take this one in Chicago for their fifth straight win.